Glen Helen kicks off series on environment— Thinking many generations ahead 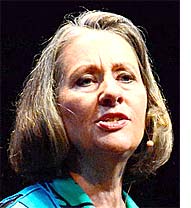 Carolyn Raffensperger, here speaking at a TED event in Maui, Hawaii, will lecture on Friday at 7 p.m. in the Glen Helen Auditorium on the precautionary principle as a way to stem the environmental pollution that threatens the lives of future generations. (Submitted photo)

Consider the contrast. Iroquois law requires decision makers to consider the consequences to the seventh generation. Not only does U.S. law not protect Americans seven generations from now, it allows the continued creation of environmental toxins that will be hazardous to those in the ten-thousandth generation, according to environmental lawyer Carolyn Raffensperger.

But by employing the precautionary principle, says Raffensperger, the risks to human and ecosystem health from industrial activities like fracking, nuclear energy and the use of dangerous chemicals can be reduced.

Raffensperger will speak to the failure of the free market system and how to avert harmful environmental impacts in the face of scientific uncertainty at a lecture this Friday at 7 p.m. at the Glen Helen Auditorium sponsored by Glen Helen, Antioch College, Northeast Ohio American Friends Service Committee and Cleveland-based Women Speak Out for Peace and Justice.

“The capacity of our generation to leave catastrophes to the ten-thousandth generation is immoral and unethical,” Raffensperger said in an interview this week. Raffensperger, of Ames, Iowa, kicks off a summer series on environmental issues sponsored by Glen Helen that includes workshops on fracking, wilderness survival and adventure first aid.

“As an ecology institute we need to be catalyzing conversation on important environment or ecological things impacting us now,” said Glen Helen Project Manager Brooke Bryan. “In general we’re trying to keep the environment in everyone’s mind.”

Raffensperger, also the executive director of the Science and Environmental Health Network and co-editor of Precautionary Tools for Reshaping Environmental Policy (2006), said that the rights of future generations to have clean air and water should be enshrined in law and proposes a way to do so.

“Does your baby or your grandchild have a right to be born in this world with clean air and clean water, and if that baby has that right, how do we protect it?” she asked.

Raffensperger explained that the precautionary principle shifts the burden of proof from those who are impacted by industrial activities, to those who perpetuate them. Companies should be held accountable for their impacts and test their product and practices before unleashing them on people, she said.

“Everywhere I look the statistics are moving in the wrong direction — human health, state of the earth, ocean,” while rates of cancer, childhood asthma, birth defects are on the rise, Raffensperger said. But it is not necessary to accept environmental devastation to grow the economy, she said.

“The vision of government as essentially to promote the economy and not to get in the way of the economy is one view,” Raffensperger said. “But what if government’s responsibility was to serve as the trustee, the guardian, of these things that we share?”

During her talk, Raffensperger will apply the precautionary principle to the controversial new technique to produce natural gas from underground reservoirs called fracking. She asks if the risk of earthquakes, climate change and the release of biofilms from deep underground that could cause disease in humans are worth the cheap energy to heat up a toaster.

One attitude holding society back is accepting a false dichotomy between options, keeping viable alternatives out of the conversation, she said.

“Why do we accept that we have to ruin the land and water? Why are they alternatives, why are they called utopian? It’s either do something like fracking, and destroying the earth, or all civilization is going to fall apart,” Raffensperger said.