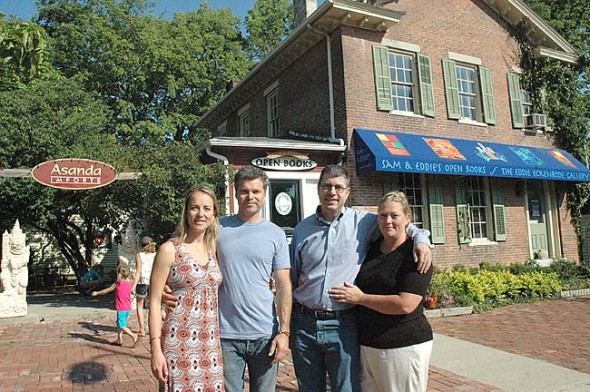 Asanda owners Molly Lunde and Lee Kibblewhite, who are married, with Brendan Comerford and Christy Lewis, another local couple, bought the property for $222,500 from Cathy Christian, owner of Ye Olde Trail Tavern. The purchase assures that Asanda can continue to operate at its current location and is an opportunity for the buyers to invest in the community, they said in a recent interview.

“We want to turn it around,” Kibblewhite said about the property, which includes a large two-story brick structure, a newer addition in the rear and a largely-unused outdoor space out back. As partners in the newly formed company, the Kings House Ltd., the new owners plan to repair the building’s roof and brickwork and to renovate the two second-floor apartments for short and long-term vacation rentals, all the while “keeping the character” of the building, Comerford said.

While Sam & Eddie’s has not yet signed a lease agreement with the new owners, bookshop owner Sam Eckenrode said she hopes to stay. And the property owners said they would be happy to keep the longtime business in its current location, where it has been for 17 years. Sam & Eddie’s will, however, vacate the upstairs apartments, one of which serves as its art gallery, at the ownership’s request.

Asanda, an Asian goods shop that sells jewelry, handbags, home accents and gifts, has operated for three years at its current location, which Lunde said has a “shabby chic-ness that lends itself to Asian goods.” Comerford, a software engineer, and Lewis, who teaches at the Yellow Springs Montessori School, also own a rental property in town but have long wanted to invest in downtown, they said.

The Kings House company name refers to an early owner of the brick building, which was built in the 1800s and may be among the earlier homes built downtown, the owners said.

According to Kibblewhite, many areas of the property are not being used to their potential, including the second floor apartments, the back portion of Asanda, once the bar of the Back Chat Café, and the large outdoor area, now home to a cooler and a cluster of honeysuckle bushes. Some renovations are a few years away, but the new owners are dreaming big.

“It’s right in the center of downtown,” Comerford said. “We want it to be the focus of things. And it can be.”

To Lunde, who has lived in town since 1983, the purchase is akin to “digging some roots in the soil” and investing in a downtown that attracts visitors from far and wide. She said she looks forward to building on the Yellow Springs culture by potentially encouraging food vendors and other booths on the property to create a “mini Street Fair” at other times of the year.

Comerford envisions the property as a place for his family.

“Maybe my kids will work in the shop, or have an ice cream stand,” he said.

The endeavor will take time and money, but perhaps most of all, community support, the owners said. They plan on a suggestion box to solicit ideas from villagers.

“It takes a community,” Lunde said.