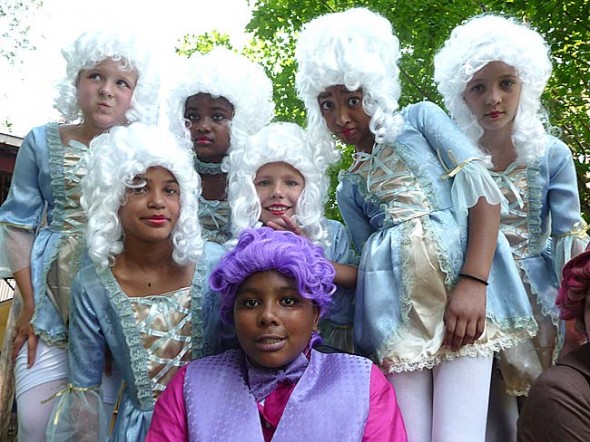 A ‘Marriage’ of Mozart and Marx

One might ask what theater company would have the audacity to mix together an 18th century opera, a Marx Brother’s film, Art Speak from the walls of the Chicago Art Institute, and Justin Bieber’s Twitter feed, all in an original show for child actors. The answer is, of course, Yellow Springs Kids Playhouse, now in its 18th year of producing shows that are often brazen and off-the-wall and always a fun challenge for its actors.

Playwright and director John Fleming outdid himself this year with Mo’s Night at the Opera, which runs from Thursday, July 12, to Sunday, July 15, and July 19–22 at the Antioch College Amphitheatre, 759 Corry St., starting at 7:30 p.m. A special performance will take place at 6 p.m. on July 20 in downtown Yellow Springs as part of the Dayton Street Cirque Carnival. Tickets are $10 for adults and $5 for students.

“There are no rules since it hasn’t been done before,” Fleming said of his original work, written specifically for Yellow Springs kids. The show includes dances from the 18th, 19th and 20th centuries, songs from Mozart to 50s pop, and a cast of characters that are an amalgamation of people in Mozart’s Marriage of Figaro and the Marx Brothers’ 1938 film, A Night at the Opera.

Take the character of Little Angel, played by Greta Kremer, who is a mix of mute Marx brother, Harpo, and male-dressed-as-female Figaro character, Cherubino. Little Angel, described by Kremer as “like a kid” and “a little oblivious,” uses a slide whistle and horn to communicate, along with pantomime. Kremer said pantomime has been challenging since her character never gets a break, but learning the technique has helped her become a better actor.

“I’m more in touch with [the character’s] emotions when expressing it physically,” she said.

Windom Mesure, playing Groucho Marx, was initially skeptical that the “seriously romantic” Mozart opera could be married with a silly Marx Brothers film, but it’s just this kind of creative opportunity that draws him to perform with YSKP. Mesure, in delivering a good chunk of the play’s comedic lines as Groucho (“Do you follow me? Well you better stop following me or I’ll have you arrested,” he says), feels a lot of pressure to be funny, even though he doesn’t always understand his own jokes.

“I have to be funny,” Mesure said. “The hardest part is they are outdated jokes. They’re funny but I don’t know why they’re funny.”

Still, Fleming was surprised that many kids immediately connected with the comedy of the Marx Brothers, which they came to know through YouTube videos shown during rehearsal.

“What holds it all together is the goofball comedy [of the Marx Brothers],” Fleming said of the show. “For some reason what’s funny today is still the same. What makes something funny hasn’t changed in a way.”

“I just have to have my legs apart more and I don’t sit up straight,” she said.

Chico is just one of many characters in the show with an agenda. He’s the manager of opera singer Ricardo, but he’s pretending to be the manager of another singer, Rudolfo. Groucho, according to Mesure, is alternately wooing a woman and after her money. Kevon Matthews, who plays Rudolfo, is in the midst of a love triangle. The action all takes place the day before the staging of an opera, The Lost Dog, and as the chaos escalates, the audience may wonder whether the show will go on.

“You have to interpret what everyone wants,” Stewart said. “There are multiple points of view, so what one person thinks is happening is not the same as another.”

Fleming explained it this way: “Everyone in the show, number one, wants something — is trying to get something,” and the situations that arise during the show keep them from getting what they want, he said.

And the comedy ensues, not only with the Marx Brothers schtick, but with elements from the original Marriage of Figaro, the libretto written by Lorenzo de Ponte in the style of Comedia del Arte, and more modern humor. Take the Tweets, four characters who speak exclusively in language gleaned from teen singer Justin Bieber’s Twitter page. Fleming surmised that opera singer Rudolfo, who calls himself the “world’s greatest tenor” in the show, might have a devoted fan club the likes of Bieber’s doting and obsessed youthful followers.

The character of Ricardo has a fan club as well, but his followers speak in words taken from museum exhibits at the Chicago Art Institute and the Museum of Modern Art in New York City, as in “the sudden visibility of sound just as sound ends,” Fleming said.

The show’s song and dance numbers draw from equally diverse sources. An 18th century formal minuet will be performed, kids will sing a two-part chorus from The Marriage of Figaro in Italian and they’ll perform more modern tunes like “Sincerely” by the McGuire Sisters and “When My Dreams Come True” by Irving Berlin.

YSKP cast members said the show has been challenging, especially with rehearsals in a hot and stuffy non-air-conditioned building, but that it’s been enjoyable.

“It’s real strict and focused, but fun,” said Shekinah Williams, who plays the title character of Mo. Kremer finds that she draws on the skills she learns during YSKP to use in other acting gigs.

Added Reese Elam, one of the Tweets: “It beats sitting at home.”

YSKP shows are always collaborative, and this year eight paid artists are working on the show. A special collaboration will take place on Wednesday, July 18, at 7:30 p.m. at the Antioch Amphitheatre following a Celebrity Chicken dinner fundraiser for YSKP. James Johnston will conduct the Community Chorus and Chamber Orchestra in a Mozart concert that features 45 performers from Yellow Springs and the surrounding communities.

Johnston, who has long admired YSKP, is thrilled to finally be a part of a show.

“I was immediately impressed with the inventiveness and how the show can pull together so many ages and abilities,” Johnston said. As for the blending of opera and the Marx Brothers, Johnston approves.

“As an opera lover, I applaud putting the world of opera in kids’ awareness.”