David Flowers has a clear vision for local sustainability. The 27-year-old crafts handmade eyewear from renewable lumber, and though wooden eyeglasses are a new fashion trend, he said his specs are a mix of functionality and art, and above all, a sustainable product.

“How something is made is more important than the thing being made in the first place,” said Flowers, who sources locally, uses non-toxic materials and hopes to soon go carbon neutral.

On the artistic spectrum, Flowers is more a down-to-earth local artisan than a peddler of a hip eco-chic fad. He designs and assembles his wares in a garage that overlooks farm fields along Yellow Springs-Fairfield Road, a space he calls his workshop, because “studio sounds pretentious,” he said.

In a market of mostly titanium, plastic and acetate frames dominated overwhelmingly by a single transnational corporation, Flowers offers a very real alternative.

“Luxottica makes 70 percent of the eyeglasses in the world,” Flowers said. “Even if people think they are getting
something unique by buying a Ralph Lauren pair or a Gucci pair, they’re all made by the same company, and very much not local.”

Eyeglasses today are far from green, he said. A part of a global supply chain, they are mostly manufactured in Asia; toxics like formaldehyde are used in their glues, and consolidation means that smaller manufacturers can’t break into the controlled market. (Luxottica also owns Lenscrafters, Pearle Vision, Sears Optical and other retailers).

Flowers stands in stark opposition. He finds local logs or lumber, mostly maple, oak, black walnut, beech and osage orange, to turn into eyewear, though he’ll use exotic woods if he finds them dumpster diving. Flowers avoids toxics in favor of all-natural food-grade finishes and beeswax, since eyeglasses are worn near the ears, nose and mouth. Featherwood Frames, his company, sells directly to customers eyewear custom-fit to their face. And, Flowers said, pointing to a stationary bicycle in the corner of his workshop, someday he hopes to be electricity-free by using the bicycle as a human-powered generator to run his power equipment.

As for his competition in the niche wooden frame market, Flowers emphasized his relatively low-tech approach.
“There are a lot of companies making eyeglasses but in an extremely high-tech way, with lasers and mass-market techniques,” Flowers said. “My main goal is keeping it as low-tech as possible.”

Flowers even tried to make wooden hinges for his frames, but found he could use old springs from recycled glasses much easier.

The eyeglass company’s origins stem from a basic DIY impulse. One night while reading two years ago, Flowers fell asleep and awoke to a broken pair of spectacles.

“I thought I’d make my own pair,” said Flowers, a lifelong tinkerer. Soon friends and strangers started to take notice of the unique frames, and asked for their own. Flowers, who has been a full-time glasses maker for the last year, has now sold 30–40 pairs of prescription glasses.

It works like this; Customers can choose one of his designs or have him draft a new concept. They then request from their optometrist a full-size lens in their prescription, which Flowers then cuts out to fit the custom-designed wooden frames. He can create any style imaginable, measures his customers’ dimensions for the perfect fit and charges between $200–$900 for a pair.

But because Flowers himself wouldn’t pay the high price of store-bought lenses, he’s open to trade or barter. One recent customer traded hours with Flowers, helping him on a project for the same amount of time it took Flowers to design and assemble the pair of glasses.

“The hours become the medium of exchange,” Flowers explained. He actually prefers a little company in his solitary work.

“I’ll enjoy making glasses more if I’m not by myself listening to ‘This American Life,’” he said. And customers may soon be able to shave the cost of their purchase by pedaling while Flowers works, he said.

Flowers came to Yellow Springs by way of Cedarville University. The mechanical engineering major dropped out after his third year because “I didn’t want to be designing heating ducts for the rest of my life,” he said. He went on to construction work, but found the amount of materials used and wasted on aesthetically-motivated renovations appalling and the monotony boring. By aiming towards sustainability and being both a designer and builder in his new trade, Flowers is finally satisfied.

“If I were just implementing others’ designs, it would be boring and if I were just designing and not building it would be depressing,” he said. Instead, he’s a part of, and in touch with, the entire life cycle of the product and uses both his mind and hands.

For the customer, wood frames have other advantages besides their relatively low environmental impact. They are actually lightweight, extremely durable and don’t warp, Flowers said. And while a plastic pair of eyeglasses will look the same after many years of wear, wooden eyewear ages, Flowers said.

“Instead of plastic, which is completely removed from the environment, wood changes, lightening or darkening in sunlight,” Flowers explained. “Wood will reflect the environment that it’s in, a good reminder of the unexpected.”

In addition to cutting his carbon footprint further, Flowers has many plans to expand his craft. He’s taking on an apprentice to help him assemble a batch of sunglasses that he hopes to sell on the streets of Yellow Springs next month.

Flowers will also be a featured in the upcoming Yellow Springs Arts Council’s exhibition of Emerging Young Adult Artists, which opens Friday, July 20, at its Corry Street gallery. There Flowers will showcase some of his frames and a toaster made from a mannequin, which both demonstrate his penchant for creating art that has a use.

“A lot of art doesn’t serve a practical need,” Flowers said. “I like the marriage between functionality and aesthetics.”

To purchase a pair of eyeglasses, contact Flowers at featherwoodframes@gmail.com or 740-607-2910. 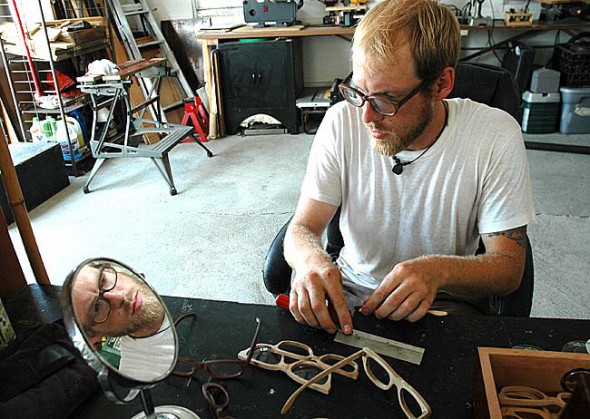 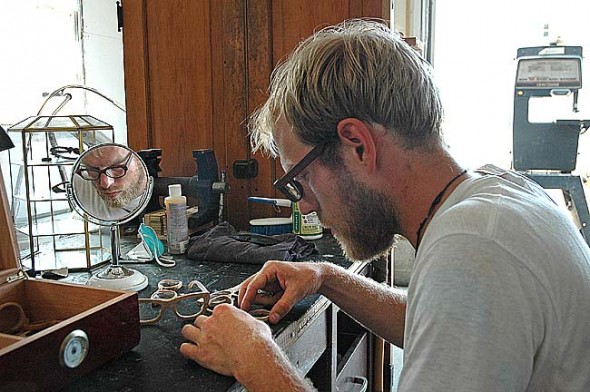