It turns out the slow food movement is only partly about food — albeit delicious, fresh, bursting-with-flavor food. Slow food is also about what you do in between bites, namely, create community, which is what local chef Mariano Rios wants to tap with an age-old, worldly concept known to the Midwest as a barbeque.

Rios comes from a midwest-type region, too — one in Argentina. In that country’s agricultural center known as La Pampa, a barbeque, if it has a grill, is known as a parilla; if it’s on a spit, an asado. And what the Argentinians put on their wood fires is known as some of the most succulent meat, raised from animals that have always enjoyed a free range life with abundant sun and grass. And lucky for Yellow Springs, a tradition that was cultivated in Argentina didn’t just stay in South America; it has come to the village to complement the start of our own return to a slower food culture that’s trying to make more time for talking, tasting and being together.

Villagers can get a first glimpse of Rios’ Argentine grilling techniques during a demonstration at the Yellow Springs Library this Monday, July 23, from 7 to 8:30 p.m. Rios will set up his live fire grill in the library parking lot to talk about the traditional culture of the asado and allow participants to taste the results of his culinary techniques. The event is sponsored by the library and is free of charge, though participants are asked to sign up for the event by this Saturday by calling Tricia Gelmini at 767-7661.

The library event is just the beginning. This past Sunday, Rios and his wife, Luisa Bieri Rios, and son, Tomé, were spread out on a picnic blanket in the grass at Peifer Orchards. The parilla was hot with saffron chicken and veggie kabobs, corn and onions and grilled chorizo sandwiches, or choripan, an Argentinian street food favorite served with chimichurri sauce. Customers coming to the farm for fresh peaches, blackberries, melons and other vegetables stopped by to check out what was cooking. It was the first day for Rios’s new Argentinian grill and catering business, La Pampa, which will be at Peifer’s most Sundays offering grilled selections from the area’s seasonal harvest. La Pampa is the realization of all the culinary and community influences in Rios’s life. He means to use his asado to provide highly flavorful food in a highly localized way, with ingredients cultivated in the community to be consumed by the community. The meat and vegetables are locally sourced — the chicken comes from New Liberty Farms, the chorizo from Blue Jacket Dairy, and the vegetables from many of the local farms. And while customers can take their food to go, they are also welcome to stay a while, spread out their own blankets and hang out with their children and pets for a meal in the shade — such as they might do on an asado Sunday in Argentina.

“In Argentina everyone gathers hours before the meal, drinking mate tea and talking while the kids play,” said Luisa, who grew up in Yellow Springs. “The whole day is spent just hanging out, and it’s great.”

Rios was raised by the asado. His father was an expert grill chef who not only prepared the asado for their large family gatherings most Sundays, but also raised the cattle, lamb and chickens they ate on their farm in Buenos Aires province, about four hours south of the capital. His father’s renown as a master of the fire fueled Rios’s interest in pursuing a culinary arts degree from a school in Mar del Plata and hence traveling abroad to learn the culinary techniques of other cultures. He learned to make pasta from scratch at an authentic Italian restaurant in Buenos Aires, and cooked in restaurants in Portugal and the island of Capri before coming stateside to be one of the original chefs of Baltimore’s Woodberry Kitchen, a restaurant founded on a farm to table concept. There he spent seven months seeking out and developing personal relationships with each of the suppliers.

La Pampa is a farm to street version of the Woodberry, founded on Rios’s heritage. It’s the kind of cooking that allows him to connect to the community he has come here to be part of. The family lives in Yellow Springs, and Bieri works for Antioch University’s Antioch Education Abroad, hoping to start a program in the Patagonia region of Argentina, where she lived in 2002 and first met Rios.

While not everyone in the region has drunk the slow food elixir, Rios feels that a movement is started. At last year’s Ohio Ecological Food & Farm Association conference in in Granville and a local food conference held in Dayton Rios connected with many local food providers and purveyors. And Yellow Springs itself has attracted local cultivators through farmer’s market, the Antioch College farm, and a handful of community supported agriculture growers. The time is ripe to add to the local food options and hopefully create more opportunities for community development as well, Rios said.

“I don’t know if this business will work, but I don’t want to do anything but this,” he said. “The [local food culture] seems to be going in a good direction. And when you have a good intention, how bad can it be?”

La Pampa plans to host a variety of Sunday events at Peifer Orchard, including Argentinian letter-kite making and lantern making, and the family encourages villagers to take advantage of the you-pick raspberries that will soon be ripe. To learn more about La Pampa (which also caters weddings and private events) and to find out where the grill will be, go to http://marianorios.wordpress.com/. 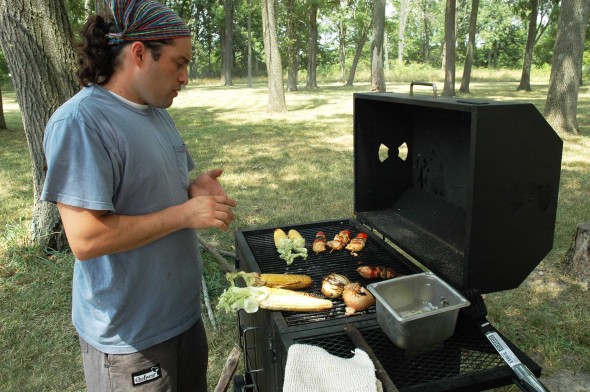 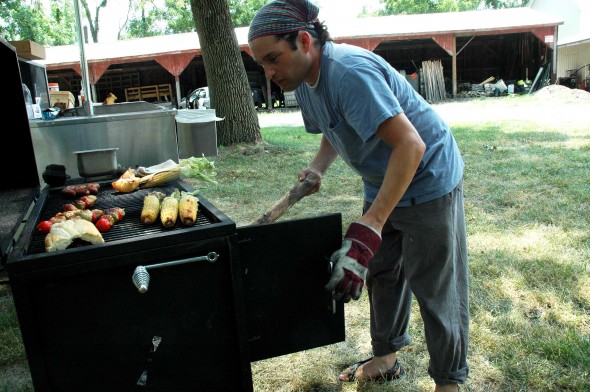 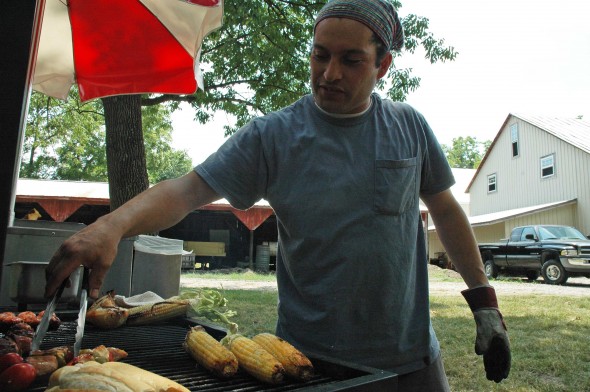