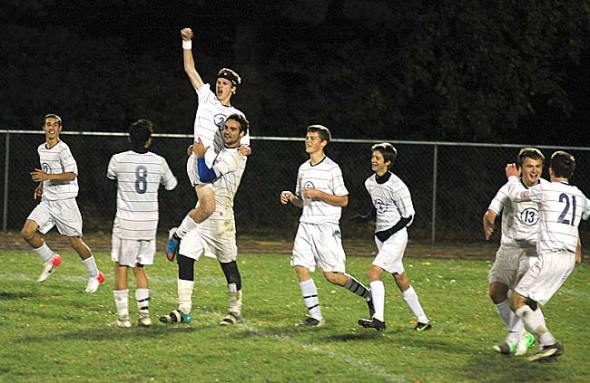 Down 1–0 with eight minutes remaining in their district opener last week, the Yellow Springs High School boys varsity soccer team looked to be near the end of their season. But the Metro Buckeye Conference champions came back against visiting Madison with a vengeance, scoring twice before the end of regulation to move on to the next round.

Just as things started to look hopeless for the frustrated Bulldogs, who pounded against Madison’s defense all night after going down by a goal early in the game, senior Roland Newsome equalized to save the game, and his team’s season. Sophomore captain Jared Scarfpin put a perfect ball into the box that found Newsome on the far post with less than 10 minutes left in the contest. He headed it into the back of the net. Then, with just over two minutes remaining in the match and overtime looming, Nathan Miller put another header in, prompting the Bulldog faithfuls to erupt in the stands.

On Monday, the boys soccer team advanced to the district finals with a 1–0 win over Botkins. It was senior Gage Miller with a rifle shot that gave the Bulldogs the advantage early in the second half, and YSHS held onto its narrow lead until the final whistle.

The YSHS girls cross country team got their revenge against Xenia Christian at districts after the Ambassadors beat them by one point at the MBC meet earlier this month. The Lady Bulldogs, seeded 11th, supplanted fourth seed Xenia Christian to place fourth in the final regional-qualifying position. The team moves onto the regional finals for only the second time in school history. The last time they did so was in 1998.

Saturday’s district race was a total team effort, starting with AnnDee Pettiford’s 57th place finish, Niki Worsham’s personal-record run of 26:44 and Christina Brewer’s season best of 23:05. Freshman Charlotte Walkey ran a personal record of 21:15 (40 seconds better than her old best) to place 17th and qualify as an individual. She ended up second fastest freshman in the district. Senior co-captains Alex Brown (11th in a PR 20:45) and Lois Miller (third in a PR 19:33) also qualified for the individual competition with their lifetime-best runs. Miller’s superb performance is a new senior class record as well as the second fastest time ever run by a YSHS athlete.

“The tears of joy in Lois Miller’s eyes when the announcer made it official that Yellow Springs had qualified for the Regional finals signified the dedication these women had made all year to achieving this goal,” Coach Vince Peters said.

Connor Gravley-Novello ran his fastest time of the year as the YSHS boys cross country team ended its season Saturday. Gravley-Novello finished 33rd out of the 104 runners. Josh Seitz also ran a strong race, just mere seconds off of his season best as he finished 80th in 21:06. Then came the Bulldog pack of Oluka Okia, Cameron Henderson and Edward Johnson. The trio placed 87th, 92nd and 93rd, respectively, with Okia and Henderson finishing with season best times of 22:04 and 22:33. As a team the ‘Dogs placed 14th out of 19. Only the top four teams and 16 individuals advance to the next round, thus ending the Bulldogs’ season.

At the 26th annual Yellow Springs Invitational at Young’s Jersey Dairy last week, Olivia Brintlinger-Conn ran a personal record for the second race in a row, lowering her lifetime best to 14:22 and finishing 28th. The boys team took ninth out of 28 teams, led by the duo of Hayden Orme (26th) and Levi Brown (28th). Cameron Haught came in 55th, followed by Kaden Boutis, in 84th and Christian Elam in 133rd.