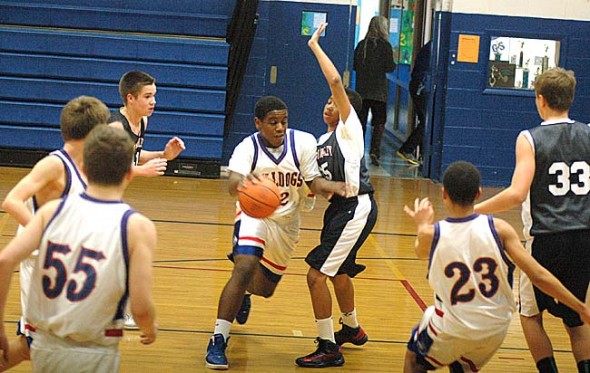 A Miami Valley defender was powerless to stop McKinney eighth grader Joe Plumer from driving to the hoop at a McKinney eighth-grade boys basketball game last Thursday. Despite Plumer’s ball skills, his team lost at home. (Photo by Megan Bachman)

What the YSHS girls varsity basketball team lacks in numbers it makes up for in talent. With two more conference wins this week, the team improved its record to 4–2 on the season. And they gave their head coach, Tim Barga, his 497th career coaching victory.

On Monday the Lady Bulldogs handed a defeat to Dayton Christian, 43–22. Ayers led scoring with 11 points, including 5/9 from the stripe, while Martin (9 points), Harshaw (7 points) and Wiggins (5 points) helped push the team to victory.

Last Thursday the McKinney seventh- and eighth-grade boys basketball teams hosted Miami Valley and despite spirited play, lost both contests. The seventh graders kept the game even going into the fourth quarter but failed to stop the fast break and lost 41–29.

On Monday the seventh-grade team came within a basket of their opponents, losing 26–24 to Dayton Christian at home. Rashawn Benners led scoring with 12 points on the night. JT Thornhill scored 10 and Ryan Fair contributed six.

At Emmanuel Christian, the seventh graders roared back in the last few seconds to nearly pull off the victory. Lewis and Nathan Davis had six points each, Marinelli helped with five points, Benners had four points and Jakob Woodburn and Christian Elam rounded out scoring with two points each.

The McKinney girls basketball teams had a hard week. On Thursday, the eighth-grade team lost to Miami Valley by a frustrating tally of 20–19. Lead scorer Elizabeth Smith came in with 11 points on the night, Jasmine Davidson scored four, Julie Roberts contributed two points and Olivia Brintlinger-Conn made a free throw.

On Saturday, both girls teams lost to Van Buren. The seventh-graders fell 19–16, with Gracie Bryce scoring nearly all of her teams points, with 15, while Brintlinger-Conn added a point from the stripe. The eighth-grade team was short 29–24. Smith put down 18 points, Fulton had four and Roberts scored two in that matchup.

And on Monday, the eighth graders dropped a game at Dayton Christian, 29–36. Smith matched her Van Buren performance with 18 points.

“The girls have been beating themselves up but still hope and believe for a huge turn around after the break,” Coach Evin Wimberly said this week.