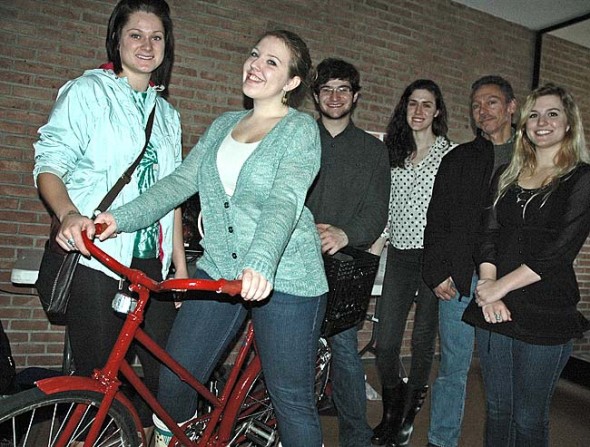 A women’s support group, bicycle co-op and senior auditing program were a few of the ideas Antioch College students came up with to tackle campus and community health problems during last semester’s global seminar, which focused on health. And the students are going beyond the classroom to implement their ideas.

At a Dec. 20 public presentation of group projects, second-year student Nargees Jumahan talked about the need for female students, who make up 70 percent of the student body, to gather in a stress-free environment. In order to support women’s mental health, her group created an independent campus organization — the Antioch College Red Tent — which meets monthly and where students can voice personal issues or just relax together through dancing or henna painting.

“We wanted to provide a space for students on campus who are struggling,” Jumahan said. The campus group was modeled after the national Red Tent movement, with inspiration and input from the long-established Yellow Springs Red Tent. Along with the Antioch Red Tent, the group created a video featuring Antioch students entitled “Women Who Yell,” since releasing pent-up emotion can have a cathartic effect, according to group member Lillian Burke. They wanted to break the taboo by showing women getting angry, which is rarely portrayed in the media, Burke said.

Another student group decided to create a bicycle co-op after studying health benefits of cycling and learning about a bike-sharing program that once existed at the college.

“We are resurrecting the infrastructure with the hope the program will grow and build,” said group member Lucas Gottke of the co-op. Using some seed money from the college, donated bikes from the Yellow Springs Police and the skilled support of some local bicycle enthusiasts, group members learned how to fix and refurbish bicycles. Today eight shiny, newly painted red-and-black bicycles are ready for any student to rent, free of charge, from the co-op. Cycling, which is already popular at Antioch, is expected to become even more so.

“When a lot of kids came for orientation, they saw a huge bike rack filled with bikes,” Gottke said.” Many students already have bikes, and they’re popular here. But for those who don’t, they now have the co-op.”

Also going off-campus in search of information and support was the group that grappled with the issue of ageism. By talking with older adults at the Yellow Springs Senior Center, that group became aware of a kind of discrimination they never knew existed.

“We try to respect our elders but from talking to people [at the senior center], they don’t want to be looked at for their wisdom, they want to be active politically, in organizations,” group member Forrest Humphrey explained. “Ageism is not being respected for who you are and the value you bring.”

Group members found that local seniors felt marginalized and were offended by common phrases in a youth-oriented culture, such as “over the hill,” “you’re only as young as you feel,” and “60 is the new 40.” Though Antioch has invited seniors to dine with students, Humphrey said that gesture falls short. After hearing that local seniors were interested in continuing academics, the group designed a program where seniors can audit classes at the college. Group member Brittany Parlan thinks that step could help bridge the generation gap and heal rampant ageism, which she described as destructive to society.

“It’s destructive because they have a lot to say about political issues, healthcare reform, but their voices aren’t heard,” Parlan said. “We won’t talk to them except to get a cooking recipe.”

Other students delved into the Yellow Springs water fluoridation controversy of 2010 (conclusion: fluoride has problems but is more beneficial than harmful), evaluated Antioch’s ability to serve the deaf and other disabled students (conclusion: the college is not quite there yet) and explored the use of aromatherapy, music and human touch in end-of-life care, including by volunteering at Friends Care Center (conclusion: it can be helpful).

Members of another group took on what they said the school psychologist called a huge issue on the Antioch campus — negative body image among students. The administration has pledged support for a “body week” to raise awareness of the issue, while in the meantime, students are advised to “Thank your body for being perfect,” group members said.