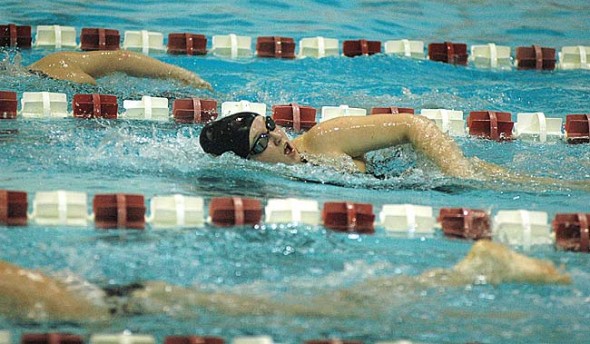 Zarine Giardullo swam her fastest time ever in the 200-yard freestyle at Friday’s Shawnee Invite at Wittenberg University. Giardullo finished in 19th place with a time of 2:55.07. New personal records were set in 18 of 24 Bulldog swims. (Photo Megan Bachman)

The Yellow Springs High School swim team had a standout night at the Shawnee Invite at Wittenberg University on Friday. Out of the 24 races that Bulldogs swimmers competed in, 18 were personal-best times.

“The team is looking very strong this year,” said Coach Kate Johnson. The first-year coach is taking on a lot of first-time high school swimmers, but a few returning athletes are helping their teammates improve, she said.

“Our team captains Rachel Meyer and Zoey McKinley have shown true leadership amongst the team and the team has developed a real sense of pride,” she said.

Both medley relay teams achieved personal records on the night, with the boys relay coming in an impressive fifth place.

The top finisher on the night was Aman Ngayai, who was the runner-up in the 100-yard breaststroke with a 1:08.38 clocking.

With three victories over the week, the YSHS girls varsity basketball team are on a four-game winning streak and sit atop the Metro Buckeye Conference leaderboard with an 6–0 conference record (8–3 overall).

The team delivered a 60–19 blow to Emmanuel Christian last Monday, led by forwards Angela Allen (19 points) and Kennedy Harshaw (15 points). Later in the week, they snuck by Middletown Christian, 27–26, in a defensive battle. And this Monday guard Maryah Martin nailed four three-pointers in a 16-point performance that sealed the fate of Horizon Science Academy in a 53–14 Lady Bulldog win. Harshaw added 14 points on the night.

Last week the YSHS boys varsity basketball team racked up a conference win against Middletown Christian, 82–66, to improve to 7–5 (3–2) and move up to third place in the conference.

The Bulldogs got off to a fast start keeping the Eagles scoreless after the first quarter 18–0. The lead would swell to 23–0 before Middletown Christian would get its first two points of the game. At half YSHS was up 27–19. The Bulldogs came flying out in the second half, outscoring the Eagles 30–19 in the third quarter.

With two big matchups — at Xenia Christian and at Bishop Ready — this week, Coach Brad Newsome reflected on his team’s prospects.

“We are slowly improving,” he said. “If we continue to improve our teamwork on offense and defense, we give ourselves a better chance to win ball games. The team and I are excited for both games this week.”

To kick off the new year, the McKinney eighth-grade girls basketball team won its first game of 2013, beating Troy Christian 41–26. According to Coach Evin Wimberly, it was her team’s best performance of the season. In the game Elizabeth Smith scored the majority of her team’s points, ending the night with 24. Kaliyah Fulton added eight points, Julie Roberts had four and Mackenna Moore and Danni Horton scored two each.

Later in the week, the eighth-grade team lost a nail-biter to Middletown Christian, 32–31. In that matchup Smith led with 19 points while Bryce, Davidson and Roberts each contributed three points.