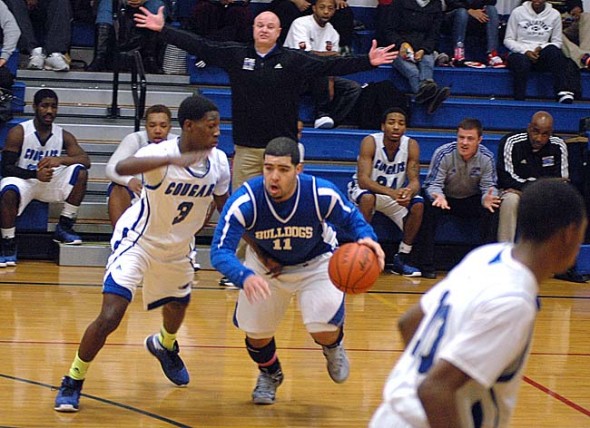 As part of the Bulldog Classic, on Thursday the Bulldogs soundly defeated Lockland 76–61 with the help of double-digit scorers Roland Newsome (27 points), P.J. Russell (20 points) and Wesley Moultrie (16 points).

But on Friday, YSHS faltered against Clark Montessori, letting their opponents march out to a 20–6 lead in the first quarter. Still down by 14 points with just two minutes remaining in the half, the Bulldogs offensive was sparked by steals by Russell and Liam Weigand and strong defense in the paint by Robbie Jones and Moultrie. When the halftime buzzer sounded, they were only behind by six. But Clark Montessori came out strong in the second half to extend their lead. The Bulldogs couldn’t catch up and lost the game.

In recent weeks, the Bulldogs have been inconsistent in the win department, taking down teams one day before falling in defeat the next. On Dec. 11 they trounced Emmanuel Christian 76–34 on a 28-point Russell performance that included 3–3 beyond the arc before losing at Miami Valley later in the week. In that game, the Bulldogs fell behind 42–25 at the half but mounted a 23–5 run in the third quarter to take the lead by one point. But the Rams outscored the Bulldogs down the stretch and YSHS lost 71–57. Moultrie’s double-double with 15 points and 15 rebounds helped the Bulldogs stay in the game.

Then, on Dec. 18, YSHS took down Dayton Christian, 67–55, thanks to high scoring by Russell (22 points) and Newsome (20 points) before losing to Dayton Stivers two days later. At Stivers, Newsome’s 21 points, 10 rebounds and four steals were not good enough to get the job done. The Bulldogs lost 68–78.

Over the holiday break the girls varsity basketball team gave its coach his 499th career win with a drubbing of Jefferson but failed to deliver the milestone victory against Arcanum later in the week. Their record is now 5–3 (3–0).

Kennedy Harshaw led her Lady Bulldogs to a 63–31 win over Jefferson with 19 points. Angela Allen (13 points, 5 of 7 from the line) and Brianna Ayers (12 points) also made it into double digits on the night. Other Lady Bulldogs to get on the board were Maryah Martin (7 points), Keturah Fulton (6 points), Paloma Wiggins (4 points) and Molly Hendrickson (2 points). Harshaw was also strong at Arcanum, scoring 16 of the team’s 24 total points. They lost 49–24.