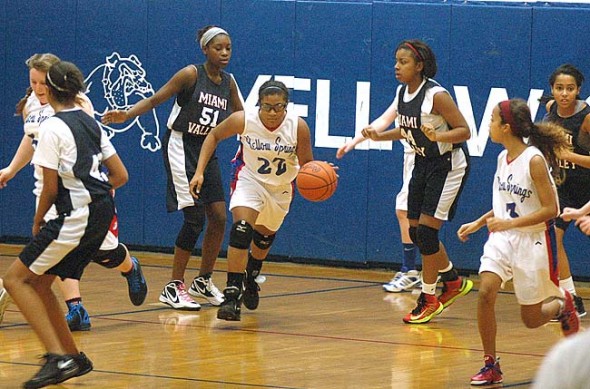 Elizabeth Smith emerged from a melee with the ball during the McKinney eigth-grade girls’ win over Miami Valley on Saturday. Smith scored 15 points and was dominant on both sides of the court in the 25–20 Lady Bulldogs victory. Other McKinney players pictured are Danni Horton, left, and Julie Roberts. (Photo by Megan Bachman)

A heartbreaking overtime loss at the hands of Miami Valley on Saturday slowed the Yellow Springs High School girls varsity basketball team’s march to a league title. They are now tied with Troy Christian (8–1) for the first place position in a battle that might come down to the final game of the regular season.

Against Miami Valley, the Lady Bulldogs came back in the fourth quarter by outscoring the Rams 11–7 to tie the game 33–33 at the end of regulation. But in OT they were without forward Angela Allen, who fouled out with one minute remaining in regulation, and were outscored in the extra period 6–1. They lost 39–34, due in part to poor free throw shooting (they were six of 25 from the line). Maryah Martin and Brianna Ayers led scoring with nine points each, while Allen added eight, Kennedy Harshaw had six and Keturah Fulton scored a field goal.

Earlier in the week, Ayers led her team to a win over Middletown Christian, 40–30, with a 20-point performance that included 10 of 14 from the line. Allen added 10 points, Harshaw had five, Martin a three-pointer and Fulton a field goal.

8th grade girls come from behind

The McKinney eighth-grade girls basketball team showed resilience and discipline in a come-from-behind victory against Miami Valley on Saturday morning. Down 11–6 at the half, the Lady Bulldogs battled back in the third with a 9–5 run. Anchored by a strong defense that caused turnover after turnover and solid ball movement, the team climbed back to within two points by the third quarter’s end.

To start the fourth, Elizabeth Smith of Yellow Springs drove strong to the hoop to score on a layup and draw a foul. She swished the free throw to give her team its first advantage, 17–16. Smith’s steadiness from the stripe, Danni Horton’s dominance in the paint, three-pointers from Julie Roberts and Gracie Bryce and good defensive rebounding spurred the Lady Bulldogs to extend their lead. By the final buzzer, they were up 25–20. Smith ended with 15 points, Roberts and Bryce had three points, and Kaliyah Fulton and Horton each had two points.

Later in the week, the team played a hard-fought battle at Miami Valley. In a back-and-forth game the Bulldogs came out on the losing end, 33–21. Benners led with nine points, Browning had five, Davis contributed four, Marinelli had two, and Chappelle netted a free throw. According to Coach Elam, “the Bulldogs played with heart ’til the end and showed a lot of improvement.”