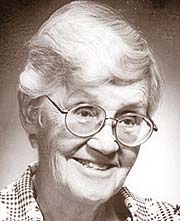 Born on June 8, 1926 in Yellow Springs to Charles M. and Beatrice Heider Alexander, Sister Terry, as she was more familiarly known, was raised in St. Paul Parish, Archdiocese of Cincinnati, and graduated from Bryan High School before entering Maryknoll Sisters on Sept. 6, 1945, at its motherhouse at Maryknoll, N.Y.

Primarily an educator and parish minister, Sister Terry specialized in teaching religion, though she also taught commercial subjects. After five years assisting with production of The Field Afar, the magazine now known simply as Maryknoll, Sister Terry was sent to Panama, where she taught English, history, typing and bookkeeping at Colegio San Antonio in Puerto Anmulles from 1960–1965. She then taught religion and commercial subjects at Colegio San Vincente, Ancon, Panama, from 1965 to 1972.

In 1973, she was sent to Boqueron, Panama, where she worked for seven years in pre-evangelization before being assigned to El Salvador, where she lived and worked among the people of La Libertad and Santa Ana during the height of violence in that nation from 1980 to 1981. Reflecting in 2010 on that experience, Sister Terry, a consistently kind and gentle person throughout her life, described it as “rather scary. We [the Sisters] stayed because we felt God had sent us to be especially with the poor, just to be able to walk with the people, to accompany them. As Sister Ita often said, ‘We live with the questions now, knowing the answers will come when needed.’ We took the risk — not to leave the poor, especially the women and children who could not leave.”

Late in 1981, she was sent to Guatemala, where she concentrated her efforts on evangelization before being sent, two years later, to Mexico, where she served in pastoral ministry among the people of Lazaro Cardenas, Merida and Yucatan, from 1983–1988.

Sister Terry returned to El Salvador in 1991, serving as a parish minister and volunteer worker in Santa Cruz and Soyapango through 2006. In 2007, she retired to the Maryknoll Sister Center near Ossining, N.Y., where she assisted on a part-time basis in the treasury office until her retirement in 2011. A few months before her death, Sister Terry requested that her body be given to science.

One of 10 siblings, Sister Terry was preceded in death by her parents, brothers Edward, Joseph, William and Donald and her sister, Rose, who died in infancy. She is survived by her brothers John and James and her sister Patricia, all of Yellow Springs, and her sister Clara Ann Belval of Hyde Park, Vt.

A vespers service was held for Sister Terry on Tuesday, Jan. 8, followed by a memorial liturgy mass on Wednesday, Jan. 9, both held in the Annunciation Chapel at the Maryknoll Sisters Center in Ossining. The mass was celebrated by Maryknoll Father Earnest Lukaschek, longtime missioner to Latin America.