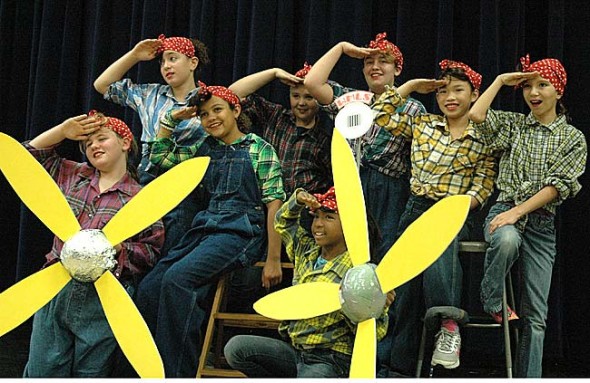 All Mills Lawn students took part in “The Albert Brown Show,” the school’s biennial all-school musical presented in December. The show was a tip of the hat to the 1940s, featuring the music and cultural life of that decade as part of the school’s project-based learning initiative. (News archive photo by Megan Bachman)

In November voters approved a new five-year emergency property tax levy at 7.4-mills to generate $915,000 for the local school district. School board members considered the levy in March and voted for it in May, after the previous year’s budget forecast showed the year’s expenditures exceeding revenues by about $650,000, with the difference climbing to nearly $1 million in deficit spending by 2016.

The district had cut about $727,000 in annual expenses over the previous three years, including the elimination of 5.5 teaching positions and four classified positions, and curtailing building budgets by 10 percent for two years. But due to flat revenues from declining personal property and income taxes and state funding, the district had been using its cash reserves for three years and expected to deplete them by the 2014–15 school year.

The levy was the first increase by the school district in 10 years.

This year the district also established a private funding mechanism, partly to help fund the transitions prescribed by the Class of 2020 10-year strategic plan and also to supplement the budget. In October the Yellow Springs Capital & Endowment Fund was established at the Yellow Springs Community Foundation, and the board created a committee to partner with the private fund.

In early February about 80 Yellow Springs High School students walked out of school in protest of the administration’s decision to place high school chemistry teacher Michelle Edwards on paid administrative leave. Edwards had been suspended due to what the district found to be ongoing issues of inappropriate and unprofessional behavior at school and with students.

Students voiced anger and disappointment that a teacher they deeply respected had been removed from class in the middle of the year without warning. High School Principal Tim Krier and district Superintendent Mario Basora discussed the issue publicly both at school and during a school board meeting that followed that week.

McKinney science teacher Terry Graham retired in May after 12 years with the district. YSHS media arts teacher Melina Elum retired in August after 16 years with the district. The board hired Karleen Materne to teach McKinney and YSHS art, Brandon Lowry to teach chemistry and physics, and Cameron McCoy to each McKinney social studies. Nancy Beers was also hired as the assistant principal of McKinney/YSHS.

In January, Craig Conrad, head of maintenance and custodial supervisor, retired after 27 years with the district.

In April YSHS performed the spring musical Grease under the direction of Katie Mann. In May the Antioch School performed Mary Poppins.

In May Erika Chick and Savita Bathija were named, respectively, valedictorian and salutatorian of the 2012 graduating class.

In August, hunger was chosen as the interdiscipliary theme of the 2012–13 school year at McKinney and YSHS. Meanwhile, Mills Lawn focused on incorporating more project- and inquiry-based learning centered around student interest and problem-solving.

The Antioch School celebrated its 90th anniversary in March with a gala fundraiser featuring comedian Julia Sweeney. The school, started by Antioch College in 1921, is one of the oldest alternative schools in the country.