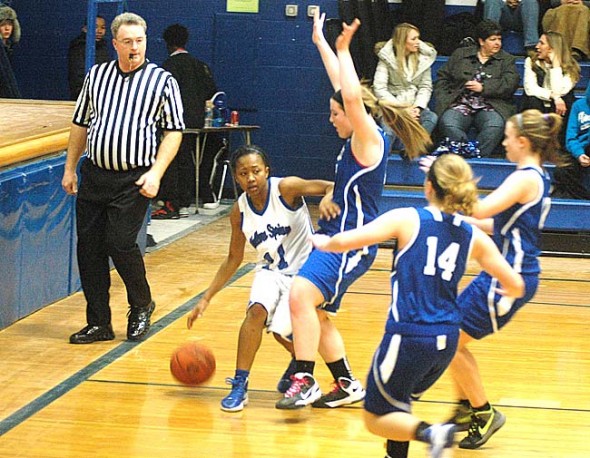 In a do-or-die game against Xenia Christian that would keep the Lady Bulldogs in the hunt for its first league title in school history, the team battled hard from opening tip-off to final buzzer. (Photo by Megan Bachman)

YSHS point guard Maryah Martin started off the game with a four-point play (a three-pointer and foul shot) and an effortless drive to the paint and layup to score the first six points for her team. Forwards Angela Allen and Kennedy Harshaw added baskets from the post. The Lady Bulldogs led 12–7 at the end of the first.

But Xenia Christian wouldn’t fade away, and in the third quarter went on a scoring run and found themselves up 36–33 with two minutes remaining in the third. For the rest of the game, Allen and Harshaw were formidable on the boards, putting in second and third chances on possession after possession (they finished with 16 points and 12 points, respectively. Meanwhile, Ayers continued her scoring campaign (she finished with a team-high 17 points), Martin handled the ball calmly under pressure and Keturah Fulton, along with her teammates, put up a strong defensive front. The Lady Bulldogs won 55–45.

Earlier last week the team lost a non-conference game to Greenon, 52–27, and this week they defeated Dayton Christian, 48–24. They are now 13–6 and 9–1 in the conference with a show-down at Troy Christian on Friday to decide the league champion.

See photos of the Xenia Christian game at the Feb. 3, 2012 Sports Sunday.

YSHS center Wesley Moultrie scored 25 points and grabbed 13 rebounds in the boys varsity basketball team’s home win over Xenia Christian on Friday. In front of packed home crowd, the Bulldogs charged out to a 43–27 halftime lead and never looked back. They won 84–71 to improve to 10–6 (5–2 in the conference).

Moultrie went 9 of 16 from the field, and sank an impressive 7 of 8 from the free throw stripe to lead the Bulldogs. Roland Newsome and PJ Russell also played well. Each finished with 17 points and eight rebounds. Russell added five steals to his stats. Jared Scarfpin, Robbie Jones and Eric Lawhorn scored eight points apiece for their team.