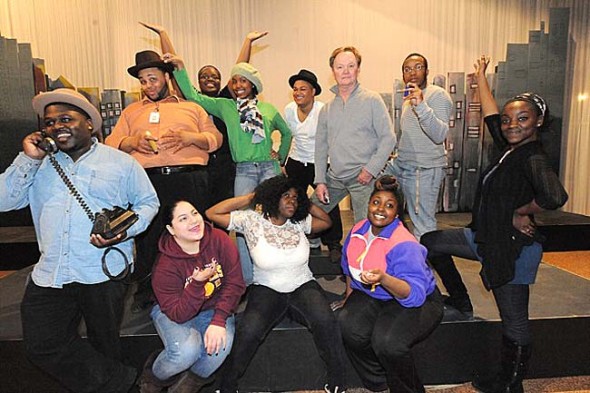 YSKP Director John Fleming, top center, will direct Central State students in Ain’t Misbehavin’, based on the music of Fats Waller, this Friday and Saturday at 8 p.m. and Sunday at 3 p.m. at the school’s Robeson Auditorium. (Submitted photos)

When he was growing up in jazz and blues-saturated New Orleans, John Fleming thought some things normal that he later found out were not.

“I thought everyone listened to jazz,” he said. “And that TV newscasts everywhere played [the jazz classic] ”Stormy Weather” before the weather report.”

And in the aftermath of Hurricane Katrina, music was the first element of the city to revive, he said, with a musicians’ village constructed in the devastated Ninth Ward to house those who lost their homes.

“Now, on a Tuesday night there are 60 places to hear live music,” he said. “It was the first thing that came back after the storm.”

This weekend, Fleming, the director of YS Kids Playhouse, returns to his jazz roots when he directs Ain’t Misbehavin’ at Central State University. The production takes place this Friday and Saturday at 8 p.m., and Sunday at 3 p.m. at the Robeson Auditorium. Tickets are $10 for general admission, $1 for students.

While Central State, where Fleming has taught theater classes for three years, doesn’t have a theater department, the school is strong in vocal and jazz studies, Fleming said.

“The students are known for the quality of their voices. They have a strong music program, and most grew up singing in church,” he said. “The singing is wonderful.”

The original Ain’t Misbehavin,’ based on the music of legendary jazz pianist and composer Fats Waller, was a musical review of song and dance that strung together 23 of his original songs. The CSU version enhances the musical review with a narrative that ties the songs together.

The play’s narrative is set in the Sugar Hill section of Harlem during the “Harlem Renaissance” of the 1920s, with scenes set outside brownstones and inside a club modeled on the historic Cotton Club.

“Instead of just a musical review, this turns the story into an educational experience for the students,” Fleming said.

Writing the narrative was a joint venture of the show’s three artistic collaborators, Debbie Blunden-Diggs of Dayton Contemporary Dance Company, or DCDC, Tristan Cupp of the Zoot Puppet Theater of Dayton, and Fleming. The group worked together last year for CSU’s production of The Wiz, and was invited back this year.

“It’s a true collaboration,” Fleming said. “The students get to work with three mature artistic entities. It’s a good opportunity for them.”

Directing the Central State version of Ain’t Misbehavin’ is a return to Fleming’s roots in a more personal way as well. After growing up and attending college in New Orleans, he moved to Boston, where he studied mime and dance. He and a mime partner next headed to New Orleans to work as street mimes, and decided to create a full-length mime. Around that time Fleming crossed paths with Otrabanda, a traveling theater troupe from Antioch College, which included a student actress named Louise Smith. Fleming convinced Smith to join him in the new mime performance, and the three created a show based on the music of Fats Waller.

After performing on the streets of New Orleans, Fleming later moved to New York City, where he studied acting and dance. He and Smith, an actress, lived in the city for 17 years before moving to Yellow Springs in 1995, when Smith was offered a job in the Antioch College theater department. It seemed a good place as well for the couple to raise their two children, Emile and Belle Pilar.

“We always said we wanted to move to a nice little college in a beautiful part of the world,” he said.

The move proved more adventurous than the couple intended, with the college hitting hard times before it was closed by Antioch University in 2008. After training for a new career as a mental health counselor and working in that field, Smith was in 2011 appointed the revived college’s dean of community life.

And Fleming has continued his work with the YS Kids Playhouse, which he launched 19 years ago. The nonprofit theater has introduced hundreds of Yellow Springs and area children to original musical theater, and many young people who acted in YSKP, such as Michael Malarkey, Martin Bakari and Meg Hild, have gone on to professional lives as actors or musicians.

And now Fleming is introducing young people to the world of theater at Central State, where in Ain’t Misbehavin’ he also shares his love of the jazz of his hometown.

For information or tickets to the play, email hoffman@centralstate.edu.