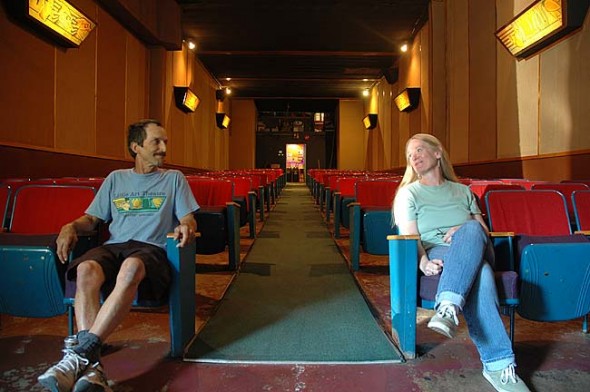 The Little Art Theatre will close for the next three months for a complete renovation and upgrade to digital. Above are Little Art Executive Director Jenny Cowperthwaite and longtime 35-mm projectionist Andy Holyoke, who will retire the old reel-to-reel projector. (Photo by Megan Bachman)

It’s the end of the reel for the Little Art Theatre. The 84-year-old theater will play its last 35-millimeter film print before dismantling its ancient projector during a special film festival beginning this week, after which the theater will close for three months to undergo an half million dollar renovation and digital upgrade.

During the “Last Reel Film Festival” the theater will show five fan favorites spanning five decades in both digital and 35mm formats. The festival runs from Friday, April 26, to Tuesday, April 30. It kicks off and ends with the Italian film Cinema Paradiso, a nostalgic movie about a young boy’s relationship with a film projectionist in a small Sicilian village, which according to the Little Art’s website is a “fitting way to say farewell to the Little Art’s vintage Italian reel-to-reel projectors.” The other films are Harold & Maude, E.T. the Extra-Terrestrial, King of Hearts and Amelie.

The “Last Reel Film Festival” is also a celebration of the Little Art’s long history. On display in the lobby will be a selection of hand-drawn film posters created by the late Dick Miller from the 1950s to the 1980s, Little Art program guides dating from the 1960s and other memorabilia. Patrons who wear a Little Art t-shirt will get a free non-alcoholic drink.

While Cowperthwaite originally wanted to show all 35mm prints during the festival, some must be projected digitally. Harold & Maude (1971), a perennial favorite at the Little Art, will be shown on Blu-Ray. Cinema Paradiso (1988) may be screened digitally as well, since there are only two prints still circulating in the U.S., one of which is severed damaged. (“It would have been nostalgic to have the film breaking every two seconds, but that’s not really what we’re going for,” Cowperthwaite said.) A brand new 35mm print of E.T. (1982) commemorating the film’s 30th anniversary will be shown. And King of Hearts (1966) and Amelie (2001), which broke Little Art attendance records when it was released, will both be projected in 35mm.

Read the full story in the April 25 issue of the News.