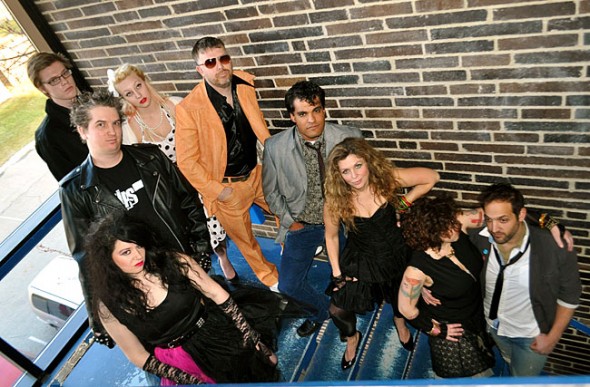 The first Yellow Springs adult prom will be on Saturday, May 4, from 7 p.m. to midnight in the John Bryan Community Center gym. Organized by the Cleveland Browns’ Backers, all proceeds will go to Yellow Springs Kids Playhouse. Tickets are on sale now at Iona Boutique, Dino’s Cappuccinos, Village BP and Yellow Springs Brewery. Submitted photo by Theresa Thinnes

A prom re-do, with spiked punch

At an adult prom, the punch comes pre-spiked. Chaperones encourage attendees to show more skin and dance a little closer. And no one has a curfew.

Villagers will have a chance to relive — or redo — the greatest night of their lives at “Enchantment Under the Springs,” a 21-and-up event organized by a committee of the Yellow Springs Browns’ Backers.

“The idea was to let people relive their prom but have more fun,” said Kira Lugo, a member of the prom committee. “I’m excited to go to the prom and enjoy it the way it should be.”

The dance will be in the John Bryan Center gym from 7 p.m. to midnight Saturday, May 4. Tickets cost $15 for singles and $25 for couples and are available at Iona Boutique, Dino’s Cappuccinos, Village BP and Yellow Springs Brewery. All proceeds benefit Yellow Springs Kids Playhouse.

According to the event’s Facebook page, “Whether your prom was da’ bomb, you felt like a freak, or you missed it altogether, this event will be for you.”

Organizers will evoke high school memories with streamers and balloons, souvenir plastic cups and a photographer on hand to snap portraits in front of a cheesy backdrop. But this time around there will also be a cash bar selling beer, wine and “prom punch.” DJ Dr. Falafel will spin tunes from all eras.

Dress is retro, according to organizer Jon Horvath of the Browns’ Backers, but, according to a Facebook event post, “if you just can’t stomach the idea of MC Hammer pants accented by a multi-pleated silk shirt and gold necklace,” then attendees can dress from any decade.

“Either choose the decade you love or the decade you went to prom in,” explained Lugo, who owns Iona Boutique and has been stocking up on new and vintage 1950s- and 1980s-style prom dresses.

Alice Young-Basora, a member of the prom’s decorating committee, plans to wear the same dress she did in high school (“It’s elastic,” she explained) and to break out her hair crimper, powder-blue eye shadow and frosted pink lipstick to replicate the ‘80s look she had as a teen.

“I’m in my 30s and I just feel like life’s too short not to have fun,” Young-Basora said, “All the inhibitions of high school self-consciousness are diminished a little.”

Brian Housh, another organizer, not only went looking for the corduroy jacket he donned for his prom in the ‘80s, he also went in search of his prom date, so they could get a second chance.

“She didn’t even hold my hand,” Horvath recalls. “My wife has promised to be a little more loving.”
Horvath will wear a bright orange ‘70s leisure suit to the adult prom. Housh will come dressed in a “classy” tuxedo t-shirt.

Horvath came up with the idea of adult prom while sipping a few “sudsy beverages” at a Cleveland Browns football game with fellow members of the local fan club chapter he started, he said. The group organizes an annual fundraiser to benefit an outside organization.

The Browns’ Backers chose YSKP as a recipient since many of them have young children. Housh, who is also the board chair of YSKP, said the organization was thrilled and volunteered to help at the event. YSKP props will be used for decoration and YSKP director John Fleming will act as the evening’s master of ceremonies.

Organizers hope it’s a sell-out event at a room capacity of 240, but they have no fundraising goals since “Browns fans don’t have goals,” Horvath said. But so far the response has been enthusiastic, he said. The Facebook page is filling up with excited comments — “Can’t wait to do the electric slide!” “A balloon arch is a requirement.” “I hope I can borrow my dad’s ’stang.”

Horvath is confident the event will be a success, in part because Yellow Springers love to dress up, he said. Young-Basora agrees.

“This town is so much fun — I’ve been to more costumed or theme parties here,” Young-Basora said. “Yellow Springs knows how to pull it off. I have no doubts that people will come dressed up.”
Visit the event’s Facebook page for more information.