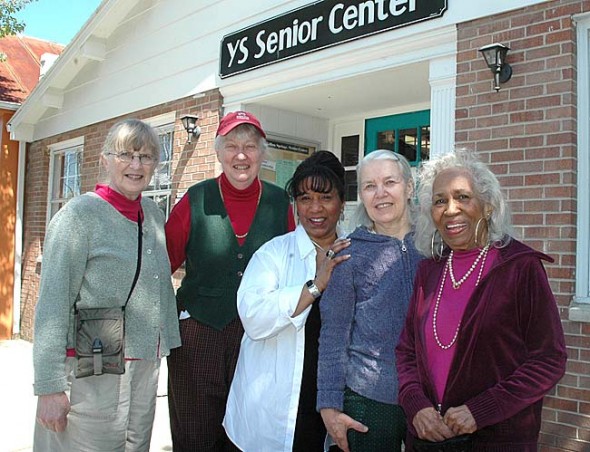 The Yellow Springs Senior Center is regrouping, reevaluating its budget and preparing for new leadership to take on the recent growth the center has experienced in recent years. Pictured, from left, are YSSC board member Suzanne Patterson, who will soon be the YSSC interim coordinator, volunteer Janeal Ravndal, board member Jalyn Jones Roe, assistant director Corinne Pelzl and member Maxine Jones. Photo by Lauren Heaton

YSSC full of members, not funds

The Yellow Springs Senior Center, which serves vital health, transportation and social needs for the area’s senior citizens, for the first time in 2011 and 2012 budgeted for a 6 percent deficit. While the local center is serving more seniors than ever before, around 700 individuals per year, revenue has not kept pace with the expenses needed to serve a growing population of elders.

In addition, the Senior Center has recently undergone a series of leadership changes, beginning with the unexpected resignation of Director David Scott last fall, and followed by the currently pending resignation of Interim Director Amy Crawford, effective May 13. (A farewell reception for Crawford will be held on Thursday, May 2, 2–4 p.m. in the Senior Center great room.) New Senior Center Board Member Suzanne Patterson agreed this month to step in as YSSC Interim Coordinator until a permanent director can be found. The Senior Center board of trustees announced in a press release this week that it hopes to hire a director by the end of July this year. According to Jalyn Jones Roe, vice president of the YSSC board, the center is taking time this spring to consider strategies to address how to move forward.

“This is an all-for-one effort with ideas coming from staff, the board, from everyone,” Roe said this week. “I’m proud to be part of this organization because it is a real collective environment, and we’re becoming even more so.”

One recent afternoon, the Senior Center was abuzz with about a dozen people spread throughout the crowded facility, including one group working with the Girl Scouts, a small quilting circle, and several people hanging out with Maria Wright at the front desk. It was an average attendance day for the center, which often squeezes in twice as many people if the public computers are occupied, nurses are giving Medicaid training, and chair volleyball is in session.

Over the past several years demand for Senior Center services has increased significantly. Under the leadership of Scott, who led the center from 2010–2012, the organization grew by about 20 percent each year in the number of people served, the number of activities organized and the number of rides provided for local seniors to doctors’ appointments and the grocery store. Prior to that period in 2009, by contrast, the Senior Center served an average of 300 seniors, including 200 residents in home assistance, 54 in transportation and 50 in the homemaker program.

While demand for services has steadily increased, revenue for the Senior Center budget has remained relatively flat. The annual budget in 2010 was $230,000, and by 2012 the number had jumped to about $320,000, due to increased expenses for fuel and building operating expenses. Meanwhile, according to board treasurer Lee Huntington, unrestricted income, such as the $45,000 annual appeal revenue, has remained steady and some grant support has declined, such as the $15,000 loss in state Medicaid funding that previously came from Friends Care Community to support the Home Assistance Program. While under Scott’s leadership, YSSC budgeted $70,000 for the 2012 annual appeal goal, the appeal ended way short of the goal with $41,000.

“If the deficits continue in similar amounts, the investment accounts will last until 2015,” Huntington wrote in a recent email.

In response to the deficit, this year the Senior Center board launched both short-term and long-term solutions. Most immediately, the staff, board members and volunteers organized several different fundraisers, including a Super Bowl party in February, the Reich chamber music trio in March and the Downton Abbey English Tea scheduled for April 28. Coupled with an effort to streamline some costs, the activities raised enough money to avert a deficit in the 2013 budget. As a result, the board agreed recently not to seek a new operating levy for the center this year, according to Huntington.

The tea is an example of the love and investment the center’s board, eight staff members, 100 volunteers and 843 members have in the Senior Center that has come not only to serve the older generation, Roe said, but also to engage a younger generation of seniors to stay active in their community.

“That’s the all-inclusiveness of the Senior Center — it’s not just services, it’s activities, involvement, being an advocate…” Roe said.

As for long-term goals, the board tasked a strategic planning steering committee to create a plan to guide future operations. The committee is working to develop an effective, ongoing fundraising campaign, consider instituting fees for some of the center’s classes and field trips as well as increasing fees for the use of the center, possibly cut some programs that are already offered by other local groups, and finally, consider a levy in the future. The committee will also consider the center’s long-time goal of acquiring a new facility, but does not expect to settle on future directions until the center’s leadership team is in place, Roe said.

“We want to be inclusive of the new director and their insights and vision,” Roe said.
The YSSC is considering using a private firm to lead the search for a new director, which is expected to begin before Patterson steps in for Crawford as interim coordinator, according to Roe.

As YSSC’s interim director, Crawford considered applying for the permanent directorship. Prior to November, Crawford served over eight years in the Home Assistance Program, helping to serve seniors still living at home. But Crawford, who is trained as a registered nurse, was only using some of her nursing skills as the HAP coordinator, and leading the center, she wasn’t doing any nursing at all. So she recently decided that she would leave the center to take on a full-time position as a nurse case manager, working from home to manage care for those with a life-limiting illness.

“I enjoyed my work and I love the Senior Center, the staff, the volunteers, the members, and the board — it was a joy to work with everyone,” Crawford said last week. “But at my core, I’m an RN, and for me this is a great opportunity to grow in the field where I belong, so I decided it was time to make a very big change. And I feel very confident that the Senior Center will find someone who really wants to do the job [of leading the Senior Center.]”

The Senior Center’s new social worker, Erika Mahle, will continue to assist members with Medicare open enrollment and other services that the Home Assistance Program has always provided.