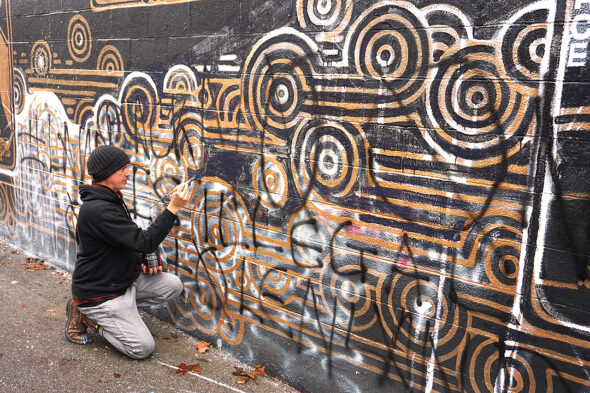 Writing on the wall

After being away for several months in Japan, local artist and muralist Pierre Nagley returned to Yellow Springs this week. Not long after he arrived in town, Nagley got to work on restoring the mural he and collaborator Lindsay Burke painted on the “free wall” in Kieth’s Alley in the summer of 2021. While Nagley was in Japan, a significant amount of graffiti cropped up on his and Burke’s mural.

Nagley spent hours covering up the tags and was able to return the mural to its former glory by the end of Monday, Oct. 31.

Nagley is pictured working to cover up a tag that read “No one is illegal on stolen land.” While he agreed with the sentiment, he still opted to remove it. Nagley did say, however, that he may include a symbolic representation of that message in a future addition to the mural, which already features a panoply of social justice themes.

2 Responses to “Writing on the wall”