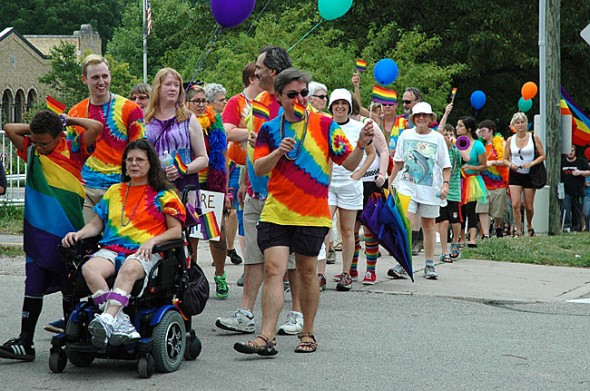 Yellow Springs pride marchers set out from the John Bryan Center during last year's Pride weekend. This year's Pride events will be June 14–16. The march leaves the Bryan Center on Saturday at 5 p.m. (Photo by Lauren Heaton)

Come out to Pride weekend

According to organizers, the weekend celebrates the diversity of sexual orientations and gender identities, promotes equal rights for the LGBTQ (lesbian, gay, bisexual, transgender, queer and questioning) community, raises awareness of anti-gay hate crime, bullying, HIV/AIDS and other relevant issues and honors the steps villagers have taken to advance the LGBTQ cause.

The weekend is important because while Yellow Springs is considered more open to LGBTQ people than other towns, intolerance can still be found within individual families, in the local schools, where anti-gay bullying remains an issue, and in Ohio laws that treat those in same-sex couples as “second class citizens,” organizers said.

Pride Weekend begins with a cocktail party at The Winds Café on Friday, June 14, from 11 p.m. to 2 a.m. featuring the music of DJ Juju.

Pride continues on Saturday, June 15, at 4 p.m. at the John Bryan Community Center with speakers and educational booths. Among the speakers are Greene County Combined Health District on HIV/AIDS and the Buckeye Regional Anti-Violence Organization on violence targeting the LGBTQ community. Villagers and Antioch College students will also give personal testimonials.

Following the talks the Flaggots, a GLBT color guard from Columbus, will perform. Then at 5 p.m. the Pride Walk Sidewalk parade leaves from the Bryan Center. At 6 p.m. Mayor Dave Foubert will present this year’s honorary parade marshals — members of the 2009 Human Relations Commission who urged Council to pass legislation creating a domestic partner registry in the Village.

At 6:30 p.m. the Dayton Gay Men’s Chorus will perform, followed by a full set from Tracy Walker, a Cincinnati-based neo-folk singer-songwriter who grew up in Yellow Springs. The evening ends with a Pride Drag Ball, a no-cover 18 and over party at Peach’s Bar & Grill featuring the Rubi Girls, a Dayton drag troupe, and the music of DJ Nordique from Columbus.

The final event, on Sunday, June 16, is a “We Are Family” potluck picnic from 11 a.m. to 2 p.m. at the lower shelter house at John Bryan State Park. Attendees are encouraged to bring their family and a dish to share. The purpose of the picnic is to celebrate and connect the many families of same-sex parents who live in the village, organizers said.

Pride weekend is not just for those who are a part of the LGBTQ community; allies who stand in support of the cause are encouraged to attend as well.

Read the full story in the June 6 issue of the News.