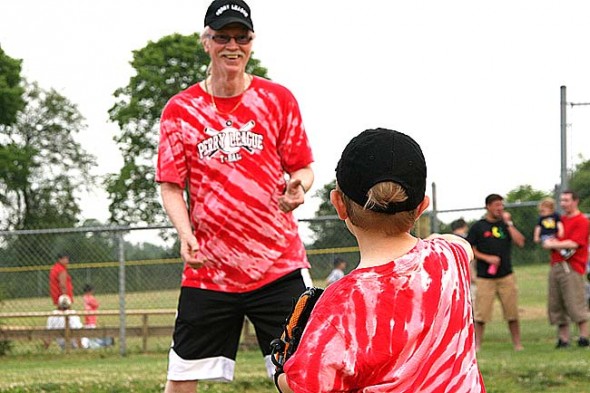 Longtime villager Jimmy Chesire, known to t-ball parents and kids as Coach Jimmy, remains in the Kettering Medical Center in critical but stable condition following brain surgery on Sunday night. The surgery came after a serious fall at Ellis Pond, where Chesire had taken his dog for a walk that afternoon.

Chesire has been in an induced coma since the surgery until his brain starts to heal, and it’s not known when doctors will bring him out of the coma, according to Robin Suits, Chesire’s wife, on Tuesday. Doctors are analyzing the situation day by day, she said,

The extent of brain damage from the fall won’t be clear until Chesire comes out of the coma, she said.

“We’re hoping the Jimmy we know and love is coming back,” she said, stating that for now, all that can be done is “to watch and wait.”

It’s not clear what exactly happened at the pond, Suits said. Someone discovered Jimmy sitting on a bench in wet clothes with a bump on his head, but he didn’t remember what had happened. The person called 911 but then left the scene, so that there are no witnesses.

People who want to do something are encouraged to send cards or wishes on Jimmy’s Facebook page. The Kettering ICU where he is hospitalized does not allow flowers, balloons, or anything other than cards. His address is Jimmy Chesire, Room 2520, SICU Department, Kettering Medical Center, 3535 Southern Blvd., Kettering, OH, 45429. He cannot receive phone calls or visitors.

The family has been moved and heartened by the many messages of love and support they have received, Suits said.