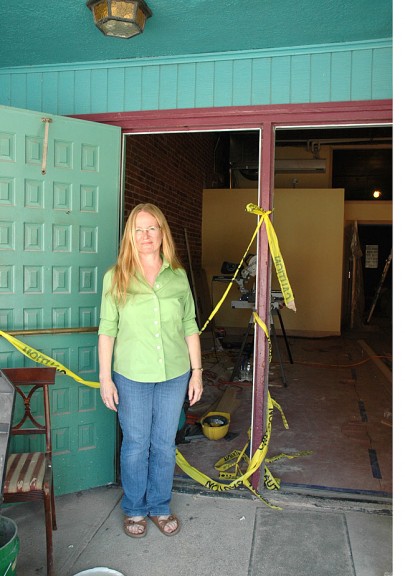 Jenny Cowperthwaite-Ruka waits with the rest of the village for her theater, whose reopening date is still a few months away.

Little Art news: the good, the bad and the unreported

The good news about the Little Art Theater renovation is that the work will be completed on schedule, on August 12th. The bad news, for those of us anxious to experience the new space and have our beloved theater back, is that it won’t be open for business again until the end of September.
“After the renovations are finished, we still have to move in, organize ourselves, purchase stuff for the new space and learn how to operate numerous new technologies” said Jenny Cowperthwaite, explaining the delay between the completion of the project and the theater’s re-opening.
According to Cowperthwaite, the building has never experienced any significant remodeling since it became a theater in 1929 and so when the time came to replace the film projectors with digital systems, it made sense to try and make more extensive changes as well.
“Kipra Heermann, our development chair said ‘we might as well see if we can do the whole shebang’” said Cowperthwaite “We might not be able to do it but we should at least try. And by golly, we did it!”
Currently, the project is in the finish phase, with things such as flooring, cabinetry and tile being installed. All of the new digital audio-visual technology will be put in starting August 5th and the new, very nice, comfortable vinyl seats with cup-holders will go in on August 12th. The colors of the seats and walls will be in earth tones to match the signature house lights of the theater and the front of the theater is also going to be repainted, though the chosen color is a surprise.
In the meantime, villagers should feel free to contact the Little Art with ideas for the marquee and also mark September 28th on their calendars.
“Details are forthcoming” Cowperthwaite said “but that is the date for our grand re-opening and it is basically going to be a party for the village. I am so excited- we are so ready!”