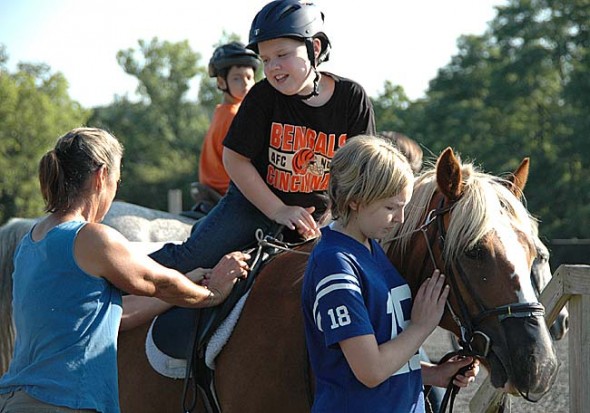 Evan Martin, a participant in the Riding Centre’s therapeutic riding program, mounted Apollo last Saturday, with the help of local high school volunteer Anna Mullin and Riding Center manager Carolyn Bailey. Mullin and a small group of other local girls provide one-on-one help for the riders, most of whom have mental and physical disabilities and would be less safe riding without assistance. The therapeutic riding program would not be possible without the dozens of volunteers who have supported it since it began in 1974. (Photo by Lauren Heaton)

At the Riding Centre, Young equestrians help others

Every Saturday morning a group of local high school students comes early to the Riding Centre to tack up the horses for the therapeutic riding lessons. When the riders arrive with their parents, they are excited, and their energy is chaotic, but it doesn’t ruffle the students a bit. They saddle the horses, help mount the riders, and lead the teams of two around the outdoor ring with meditative composure.

The students are all volunteers, according to Riding Centre Director Carolyn Bailey, and without them, the therapeutic riding program that sustains the barn wouldn’t happen. Most of the riders in the therapeutic program have varying degrees of physical and mental disabilities, including autism, Down syndrome, attention deficit, and general learning disabilities. And though the goal is to teach them to feel comfortable with and control their horses, according to Bailey, they take longer to develop the confidence and resolve necessary to direct the horses and be safe riding them. And while the riding itself can be therapeutic, some of the riders will never be able to ride independently.

“It’s nerve-racking to turn these kids loose on the horse,” Bailey said, adding that the volunteers act as both a safety net for the more advanced riders and an extra pair of hands for the riders who need support to stay on the horse.

Anna Williamson, a sophomore at Yellow Springs High School, started taking lessons at the Riding Centre when she was eight, and she has advanced through many levels since then. Though she was coming to the barn regularly to care for horses and continue her lessons, she still wanted more opportunity to be around the horses. So when Bailey asked her if she wanted to help out on Saturdays, she eagerly agreed — as did three other girls in her class, Anna Mullin, Molly Hendrickson and McKenna Banaszak-Moore. All of them felt the same, they said in a recent interview, about their love of horses and their urge to keep returning to the barn.

“Most young girls at some point fall in love with horses — we just never grew out of it,” said Regina Brecha, an older volunteer who will leave for college in the fall. She picked Mount Holyoke partially because the school had a barn where she could ride, she said.

Riding Centre founder Louise Soelberg started the therapeutic riding program at the barn in 1974, and Bailey herself grew up as a volunteer, helping the disabled to ride. During the weekly therapeutic riding lessons, students from Cedarville University volunteer to support the riders. But on Saturdays, it’s the local youth who keep it going.

The first ride last Saturday morning included a group of about six youth and young adults, many of whom have been riding for upwards of seven years. Local resident Harper Mesure started when he was in first grade, and now as a seventh grader, he is able to ride without an active lead from a volunteer. Though he says with a smirk that he doesn’t like riding, the wide grin on his face when he mounts his horse betrays him. Hendrickson worked with Mesure and his horse this week, allowing Bailey to give instruction to the rider and making sure the horse responded to the rider’s direction.

According to Williamson, it’s all about knowing how to communicate with the horse. And, said Banaszak-Moore, knowing how to “assert yourself but not be a bully.”

Heather Hammond, 22, another therapeutic rider in Saturday’s class, needed more help with her horse. She clearly was thrilled with the feeling of being on the horse, clapping and talking with exhuberance, but seemed to have little attention left to direct her horse. But adult volunteer Bonnie Knuckle held fast to the horse’s lead to keep him on the right path.

The Riding Centre is different than many barns because of its accessibility and openness to riders of different economic means, the students said. The focus is the care and love of the horses, they said, instead of high-priced stables or overworked horses. The 30 or so animals at the Riding Centre get lots of green pastures and plenty of turn-out time to relax between riding, Williamson said. Bailey’s guiding philosophy is very humane, the girls said, which can be difficult to perceive in the beginning.

“Carolyn is scary in lessons sometimes,” Banaszak-Moore said, referring to her direct and unflinching communication style. “But she pushes because she is more confident in your abilities than you are,” Brecha said.

And alongside the sternness, Bailey also models a deep love for the horses, which the riders respect and follow. And they have grown to see riding as a way to cultivate a balance of confidence and compassion, which should be available to anyone. The relationships they have formed there among their friends, their teachers Bailey and Adriene Kramer, and the therapeutic riders they now mentor, are meaningful and lasting.

“The kids might not otherwise have these kinds of relationships with disabled youth — it gives them an opportunity to be more well-rounded as people,” Bailey said.