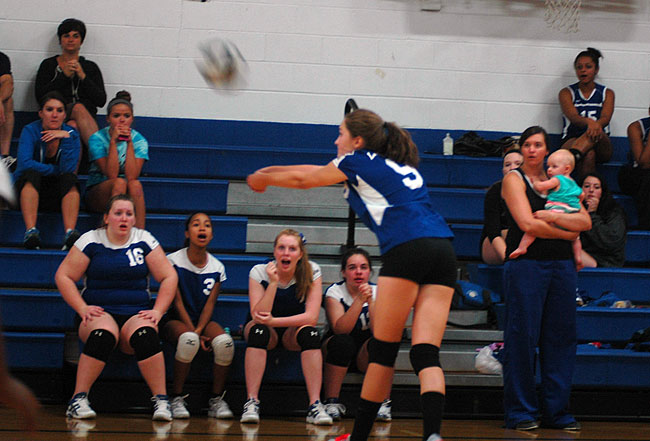 JV volleyballer Kasey Linkhart reaches out for a dig during the team's defeat of Xenia on Saturday. The varsity team fell to the visitor. (Photo by Megan Bachman)

The YSHS incoming freshman volleyball players are no strangers to success. For the last two years, they’ve dominated at the middle school level, grabbing two conference titles and posting a 21–2 record. But can the girls, coached once again by Chris Linkhart, compete at the high school JV and varsity level?

At a home match against Xenia on Saturday, the JV team put on a display of teamwork, talent and toughness that bodes well for the future of the YSHS volleyball program. The first was neck-and-neck before the Lady Bulldogs pulled away to take a 21–15 lead. But the visitors went on a 9–3 run to tie up the game at 24–24 before Yellow Springs earned its two points with confident strikes. They ended up winning the match. Read more on last year’s McKinney team

The varsity YSHS team, having graduated many of its aces from last year’s MBC runner-up squad, started out the 2013 season 1–1 in the conference. Earlier in the week, they defeated Dayton Christian (25–18), (25–17), (25–17) and fell to Xenia Christian. Division I Xenia bested the Bulldogs on Saturday.

Read more in the Sept. 12 issue of the News.