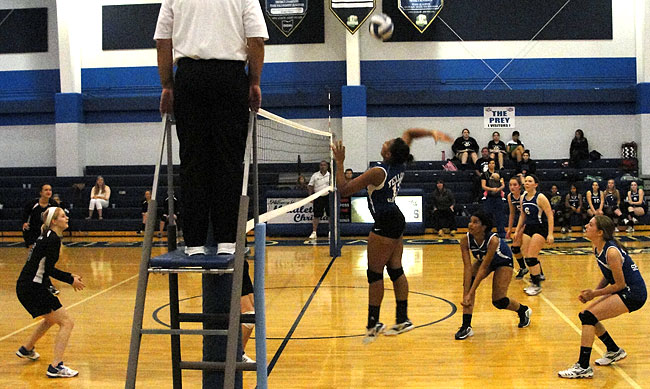 Heading into tournament play the Yellow Springs High School volleyball team finished its season 7–6 (5–4 in the conference). It was the second straight year the team posted a winning record. They finished in third place in the conference, a drop of one place from last year.

The team went on to beat Middletown Christian on Oct. 3 in four matches. It was revenge for the Lady Bulldogs, who fell to Middletown Christian earlier in the season. The score was 20–25, 25–19, 25–22, 25–20 with Harshaw registering 24 kills, Brown getting 17 assists, Linkhart contributing 14 assists and Mychael Roberts earning 11 digs.

On Oct. 1, YSHS junior varsity volleyball team played Troy Christian at home for the second time and won, 25–8, 25–17. In the first game TC was unable to handle the serves of YSHS. Mollye Malone served up four of her five aces and Dani Worsham earned six of her match total seven points in that game. In the second game TC led the Bulldogs 17–13 until Elizabeth Smith went back to serve. Smith served 12 unanswered points to win the games for the Bulldogs. She finished with 18 points.

When the JV team traveled to Middletown Christian, the match was more challenging but YS brought home another win 25–15, 27–29, 25–15. The Lady Bulldogs took control of the first game as MC had a hard time receiving the serves of the Lady Bulldogs. Once again, Smith showed off her excellent serving skills by earning nine of her 11 points in the first game.

In the second game, the Lady Bulldogs had to fight for every point. Starting at 21–21, the lead changed six times before MC was able to pull out the win. In the third game the Lady Bulldogs were back in control and closed the deal to win the game and match. Amelia Gray added eight points in the match, Gracie Wilke had seven points and seven digs, Julie Roberts contributed six points and six kills, Aliza Skinner had seven digs and Danny Horton registered one kill.