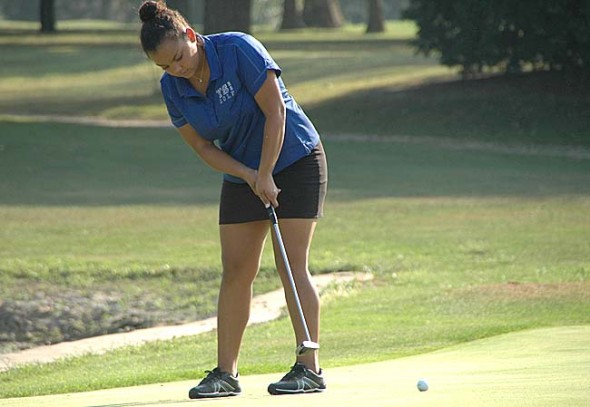 Yellow Springs High School senior Rachele Orme ended her YSHS golf career as the best female golfer in school history. Orme was a two-time district qualifier who competed against — and often defeated — boys for three of the four years she played. Here Orme sinks a putt during a match in September. (Photo by Lauren Heaton)

When Orme would step off the bus for a match, her male opponents assumed that the Yellow Springs High School golfer would be easy to beat. But after watching Orme crush her drive on the first tee, they just hoped they wouldn’t lose to a girl.

Orme, a senior, finished her YSHS golf career at districts last week with a score of 84, shy of qualifying for state. The two-time district qualifier was the best female golfer in school history, setting a low score record of 35 over nine holes (one stroke under par).

According to Coach Mike Reichert, Orme was a leader of both boys and girls on the YSHS team.

“She’s a very positive person and many of the boys and girls looked up to her,” Reichert said.

As for playing with a female teammate who would routinely score better, “it didn’t faze the boys,” Reichert added. “They knew Rachele was good and in some cases it pushed the boys to try harder.”

At the district girls tournament on Oct. 2 at Pipestone Golf Course in Miamisburg, Orme finished with an18-hole score of 84, good for 16th place out of 71 players, and two strokes better than her district round in 2012 on the same course.

The week prior, Orme came in first place at the girls sectionals with a performance of 83 (including a 40 on the back nine) at the WGC Golf Course in Xenia.

In her senior year Orme also led the school’s first girls golf team in the regular season, which had its historic first win on Sept. 11. Playing from the closer girls tees for an entire season gave Orme more experience from that distance during tournament time, when she would face other girls. It also meant fewer matches, as girls teams are rare in the area, and, in her final year of high school golf, adjusting to a new strategy.

But that didn’t stop Orme from posting her lowest career nine-hole score, a 35, this year at the girls first-ever match on Aug. 12. In four years Orme went from scoring in the high 40s (over nine holes) as a freshman to averaging a score of 40 as a senior, according to Coach Reichert.

And it wasn’t just the girls tees that made the difference. Orme worked a lot harder over the year to improve, she said. This summer and fall Orme would chip and putt with her father at the WGC course until it was too dark to see the ball, and spent time at the driving range under the lights at Young’s Jersey Dairy.

This season Orme made strides in her short game, while continuing to dominate with her driver and three wood. According to Reichert, Orme is a golfer of many strengths.

“Her biggest strength is length off the tee — she easily can out-drive most girls and some boys,” Reichert said. “She has a good understanding of the game, has gotten better at managing her game tee-to-green … and a number of times this season, she showed she can be a good short gamer in the way of chipping and putting.”

Orme’s competitive nature also helped her excel on the course, according to her father, Jim Orme, who is often bested by his daughter.

“She loves competition — she’s always been that way,” he said. “She always wants to get the ball closer to the pin than the person playing her.”

Orme, who was introduced to golf by her father when she was nine, also plays team sports like basketball and softball, but prefers the individual nature of golf.

“I enjoy that it’s a quiet sport; when I’m walking I can think to myself,” Orme said. “It’s not like basketball, you don’t have to have other teammates that depend upon you. It’s just you. If you shoot bad, it’s all on you, and if you shoot good it’s all on you.”

At districts, Orme played well on the front nine, scoring 40, then “choked” on the back nine, she said, struggling with her short iron play. But on the 18th hole, Orme regrouped, taking a ball in the sand trap to within feet of the green from 200 yards away and holing out a bogey.

“You just have to tell yourself that the next shot is what’s important, you can’t really think back on the past,” Orme said of the mental aspect of golf. “Even if you have a bad hole you can still birdie the next hole. You can still finish out strong.”

Orme hopes to earn a college scholarship to golf and, though she’s had some offers, has yet to narrow down a school. She’s grateful to her father for introducing her to the sport at such a young age, and to Reichert for helping her during and after practice with her strokes and strategy.

According to Reichert, who has coached golf for six years at YSHS, Orme will be missed.

“It’s been a pleasure and a privilege to have her on the golf team and has made my experience as coach pleasant,” Reichert said. “I will certainly miss her next year, and not just as a golfer, but as a person.”