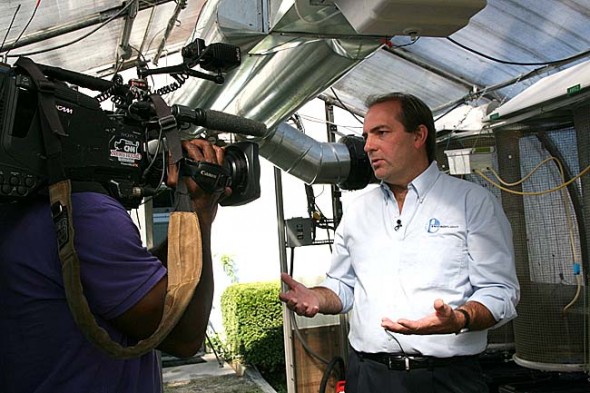 EnviroFlight, a local business that makes animal feed out of insects, has been in the national media spotlight in recent weeks, with a spot on NPR’s “All Things Considered” and an upcoming feature on CNN’s “Erin Burnett OutFront.” Shown above, on Monday a CNN cameraman from Atlanta taped EnviroFlight founder Glen Courtright. (Photo by Suzanne Szempruch)

While it’s not entirely clear that black soldier flies have more sex when listening to Barry White songs, Glen Courtright isn’t taking any chances. After all, the larvae produced by randy flies provide the foundation of EnviroFlight, Courtright’s local business, and he needs as many baby bugs as he can get. So he plays a continual loop of “Can’t Get Enough Of Your Love, Babe” in the “Love Shack” building of his MillWorks location, where the bugs’ only job is to procreate.

And while Courtright takes a playful attitude toward his role as bug love impresario, he’s not fooling when it comes to big dreams for his business.

“What we do here that’s magical is make the waste problem go away and also solve the world’s food production problem,” Courtright, a systems engineer, said in an interview this week.

Specifically, the world population is expected to grow by 2 billion by 2050, and the U.N. has estimated that food production must increase 60 percent by that time ­— even as the cost of animal feed is rising. Enter EnviroFlight, which aims to produce a new source of animal feed, derived from bug larvae that consume various waste products. The final product, which is already being purchased by several zoos nationwide, will be appropriate both for farmed fish and livestock production, Courtright believes, and will be less expensive and more environmentally sustainable than what’s already available.

“We can augment the grains that are normally fed at a lower cost and with a cleaner product,” he said.
And in recent weeks, the world has been beating a path to Courtright’s door. Last week, EnviroFlight was featured on NPR’s All Things Considered, and on Monday Courtright spent several hours being trailed by a CNN cameraman from Atlanta (to be aired sometime next week on “Erin Burnet OutFront” at 7 p.m.). Later this week, he will be interviewed by Veja, a news magazine from Brazil.

“Everyone’s betting on what we’re doing,” Courtright said. “We’re getting good press and being seen as viable.”
It’s a welcome change after several years as being seen as, well, a bug love impresario. EnviroFlight’s path to legitimacy began after a United Nations report on edible insects that came out in May featured the business, and soon after Bloomberg Business Week picked up the news. WYSO Public Radio’s Neenah Ellis and her husband, NPR icon Noah Adams, may have alerted NPR to the local story, Courtright says, and other media, both local and national, have followed suit.

“We’re getting interviewed all the time,” he said.

Only four and a half years old, EnviroFlight is growing faster than Courtright imagined, and he doesn’t lack for imagination. But there’s still lots of refining to do, and he’s constantly experimenting with the best waste products to feed to the flies, which will eat pretty much anything. While brewer’s grain, which is the waste from the beer-making process, was initially the bugs’ main diet, Courtright is trying out other options that may have more nutrients, including leftovers from chicken nugget factories and slaughterhouses. There’s even the possibility of using cookie meal, from the byproducts of baked goods.

“We’ll be experimenting here all the time, making slight modifications to the process,” he said.

And before his product can really take off, “we have some regulatory hoops to jump through,” Courtright said, which involves the maintaining of “laborious records,” and making sure the products meet national standards for safety for approval by the American Association of Feed Control Officials. In the meantime, he’s working to develop a feed for baby pigs and lactating sows, and plans to also produce products for freshwater yellow perch and rainbow trout. He’s in talks with interested parties from Greece and the Netherlands, and has been awarded a contract to do research in Kenya.

All this activity means growth, and the company has grown to include eight employees, including a chemical engineer and a Ph.D. in environmental science; he plans to add two more employees, including an engineer and business development specialist, soon. Recently, Courtright has extended his footprint at MillWorks, adding 4,000 square feet of additional office and warehouse space to the 6,000 square feet he already has. While Courtright said he’s committed to keeping his research and development component in the village, where he lives, he believes he’ll at some point need to expand production into locations closer to his agricultural clients.

Courtright hopes to take a vacation soon, his first since he started his company. He doesn’t yet know where he’s going, but one thing seems certain: he won’t stop thinking about how bugs could feed the fish and livestock that ultimately feed the world.