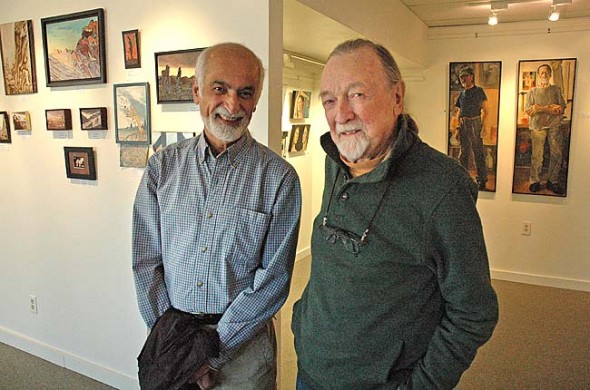 Local painters Parviz Dadras, left, and Thomas Verdon share the gallery at the Yellow Springs Arts Council with exhibits that run through Dec. 1. Both longtime Yellow Springers turned to painting full time later in life and explore human nature through portraits. But Verdon, whose art is visible on the right, uses classical painting techniques, while Dadras incorporates symbolism in his works, which can be seen on the left. An opening reception for the exhibits will be from 6 to 9 p.m. Friday, Nov. 15, with a talk from Verdon starting at 7 p.m. (Photo by Megan Bachman)

Two local artists are proof that it’s never too late to be what you might have been.

After retirement, Parviz Dadras and Thomas Verdon returned to their first love, painting, about 14 years ago — Dadras when he retired as an engineering professor and Verdon when he decided to go back to art school after dropping out a half century earlier.

Separately, they have been painting in their local studios ever since and now, together, they show their work locally for the first time.

Dadras and Verdon share the Yellow Springs Arts Council Gallery through Dec. 1 with their concurrent shows, Dadras’ “Random Musings” and Verdon’s “The Artful Struggle: A Creative Quest to Paint Our Own Kind.”

Even though Verdon, 83, and Dadras, 73, met just recently, their artistic journeys run parallel. The longtime Yellow Springers have lived here 33 and 34 years, respectively. They both started painting full time around the turn of the millennium. And they loved to paint in their youth before pursuing long careers in non-artistic fields — Dadras in engineering and Verdon in business and counseling.

But while they share a similar path and a fondness for figural paintings, Verdon and Dadras diverge greatly in how they paint, which makes for a compelling juxtaposition of exhibits.

Verdon is classical in style, painting live models and still lifes in oil in the way of masters like Cezanne, Degas and Modigliani, who were “painterly painters,” Verdon said.

“They don’t go for a photographic likeness — you can see they painted,” he said of his influences. Verdon creates an impression of his subject with a delicate attention to color in his portraits, self-portraits and nude studies.

“It’s very intuitive,” Verdon says of his process of painting portraits. “Whenever I try to do something, it doesn’t turn out that well. If it’s really working, I get into an altered state.”

Meanwhile, Dadras’ mostly acrylic paintings are heavy with symbolism in their color and texture and feature figures that seem to have long histories. Dadras wants his work to have a narrative in the vein of the German Expressionists, who proved that “paintings can be as powerful as a novel” and who challenged the notion that art should be beautiful and appealing, he said. Dadras also values the notion that anyone can be an artist.

“Really in this day and age, after Marcel Duchamp, anyone can be an artist and anything can be art,” Dadras said, referring to the revolutionary conceptual artist.

Arts Council Gallery Coordinator Nancy Mellon finds the work of Verdon and Dadras fascinating, as each brings their own angle to what is essentially a study of people, she said. Verdon, who spent 25 years as a psychotherapist, explores human nature through his impactful portraits.

“Tom is really searching inside each person and he’s searching inside himself,” Mellon said of his painting. “He has so much knowledge of what makes people tick and so much acceptance of them. … There’s a quietness and a calmness that he seems to bring out in his portraits.”

Dadras’ paintings are beautiful and reflective and many include human faces that hint at deep backstories, Mellon said.

“Many of them are of a person’s face, but there’s so much more, there’s a real story behind them,” Mellon said. “They always pique my curiosity as I try to figure out what Dadras is saying.”

Their different styles seem to reflect the artists themselves. Dadras is, admittedly, a very private person. Mellon coaxed him into putting on an exhibit — his first ever — after she visited his studio in his Meadow Lane home and looked upon what he calls his “wall of angst.” (Dadras had previously submitted works for the Arts Council’s miniatures shows.) Dadras is also entirely self-taught. And though he has impressions that find their way into his work, he wants the viewer to discern the meaning themselves.

On the other hand, Verdon is far more of a people-person. Five years ago he organized a painting group in town that still meets weekly at his Union Schoolhouse studio to paint live models. (Consequently, many of his portraits are of local people). When he became a full-time artist, he went to art school to learn from his teachers and peers, and continues his arts education, just recently returning from a two-week workshop with renowned American painter Daniel Greene. The interaction between painter and subject is a relationship of great interest to Verdon.

“It’s probably one of the keys — what happens with the painter and the model,” Verdon said. “There’s certainly an exchange of some sort that’s not often spoken to. … And you progress — you reach different levels as you go along.”

Verdon, an Arts Council member, applied for an exhibit in part so he could get feedback on his work. Though he appreciates sales, he doesn’t rely on them to make a living, giving him more freedom in his work, he said. Instead, Verdon, who received his Bachelor of Fine Arts degree from Wright State University in 2006, is on a journey to improve as a painter, a pursuit which at times borders on the frustrating. But it’s a long-held ambition for Verdon, who taught himself to paint in rural Michigan while attending a school without an art teacher. He went on to art school in Detroit after high school, but dropped out after a year, and followed the men in his family to a career in business, after a stint in the Air Force where he served in the Korean War. The return to art has “felt really good,” Verdon said, adding that Yellow Springs has been a supportive community in which to paint.

“It’s the whole atmosphere here, there is a kind of enthusiasm for the arts and a lot of practitioners,” Verdon said. “I’m sure that the Arts Council has had a lot to do with that over the years.”

Dadras, who lives in the village with his wife Harriett, also loved painting in his youth. Through the years he stayed in touch with the art world through critical art reviews and art magazines, while finding time to paint whenever he could between grading papers as a professor of engineering at Wright State. Painting has been his main hobby since retirement, with plans to continue since he “hasn’t run out of ideas yet.” In his work, Dadras admits some darker themes are at play.

“Some are a little pessimistic,” Dadras said of his works. “I think in good art — even if it’s music, painting, novels — there has to be a hint of tragedy. After all, that’s the end point of life, no matter what. … Even when you are intoxicated with beauty, there is a tinge of that.”

Verdon is also making a statement in his exhibit. The show is decidedly not lacking in nudes, in part as a reaction against the controversy last year over nude paintings hanging in a show at the John Bryan Community Center, he said. Nudes are used by artists to get a better sense of the body, and, for artists, become “fairly pedestrian after awhile,” he said.