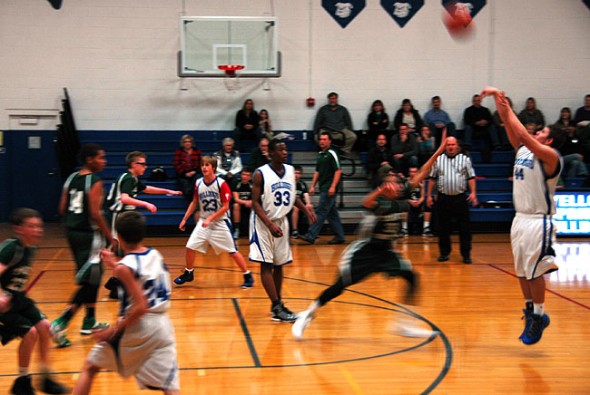 The Lady Bulldogs won their home opener against Jefferson on Nov. 25 by a score of 49–27. Kennedy Harshaw led the way with 14 points. Elizabeth Smith added 12 and Shanice Wright scored nine.

Hosting Belmont last week Harshaw and Smith contributed 16 points each and Wright added 13 for the 56–34 YSHS victory. Solid defense kept the visitors to only 12 points in the first half.

At the London Tip-Off Classic on Nov. 29, Isaiah Taylor led with 16 points and 12 rebounds and Ethan Dewine was strong off the bench, with 10 points, but YSHS lost 85–46.

Against Columbus Beechcroft as part of the same tournament, the Bulldogs fell 63–55. Taylor led the team with another double-double (12 points and 10 rebounds) and added six blocks. Kaner Butler scored 11 points and Liam Weigand added 10 points on the night.

This year’s McKinney girls seventh and eighth grade basketball team includes many first-time players who are hard at work learning the skills of teamwork and the game of basketball.

The McKinney eighth-grade boys basketball team began play this season with three games to date and one victory.

The Bulldogs overwhelmed the Horizon Science Academy Dec. 2 with great defense and nine different players scoring points as they won 55–20.

The favor was returned by a strong Xenia Christian team Dec. 5 as the Bulldogs fell 38–20 after making a great run to get back in the game. Leading scorers were Browning and Marinelli with Browning and Chappelle the leading rebounders.

A valiant effort by the Bulldogs against Troy Christian on Monday resulted in a 50–36 loss, though the comeback run was a fan pleaser. Led by Browning and Marinelli, with 15 and 16 points respectfully, the comeback was fueled by the team’s great tenacious man-to-man defense, according to Coach Branson Pyles. Brintlinger-Conn played strong defense and had three points and Chappelle had two points and many pivotal rebounds.

On Monday, the McKinney seventh-grade boys basketball team played suffocating defense and rebounded the basketball very well en route to a 27–12 victory against Troy Christian in its home opener. In the third quarter, the defensive effort was so tenacious the visitors were unable to score. Trey Anderson had a double–double, finishing with 11 points and 10 rebounds. Andrew Clark played a solid all-around game, scoring nine points and leading the Bulldogs in assists.

Last week, in the first game of the season, the team came out with a lot of spirit and enthusiasm, but lost 46–28 to Xenia Christian. Shots were not falling for the Bulldogs, who fell behind by double digits in the first half. The second half was a much more competitive contest with Xenia Christian narrowly outscoring McKinney 26–22. Tyreese Benning led the Bulldogs in scoring with 13 points followed by Andrew Clark, who tallied nine points.