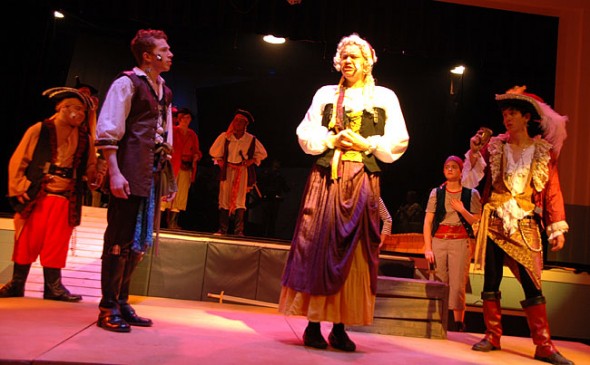 Alex Kellog, center, in the role of the maid of all work, addresses Frederic (Ben Green), left, the Pirate King (Josh Seitz), right, and the rest of the ship's pirates at the beginning of "Pirates of Penzance." (Photo by Megan Bachman)

The Yellow Springs High School Drama Club and the YSHS Theatre Arts Association present, “Pirates of Penzance,” opening at the Mills Lawn Auditorium at 8 p.m. Friday, March 14, with other performances at 8 p.m. Saturday, March 15, and 2 p.m. Sunday, March 16, as well as the following weekend, March 21–23. Tickets cost $5 for students and seniors and $10 for adults.

The traditional “Curtain Warmer” fundraiser with drinks and hors d’oeuvres is
from 6 to 7:45 p.m. Saturday, March 15, at the Arthur Morgan House Bed &
Breakfast. For reservations contact Daniele Norman at daniele.norman@gmail.com
or 937-767-8529.

One of the more popular collaborations of librettist W. S. Gilbert and composer
Arthur Sullivan, “Pirates of Penzance” premiered in New York City in 1879.
The show is most famous for its fun alliterative tune ““I am the very model of a
modern Major-General” (“I’ve information vegetable, animal, and mineral,” it goes
on) which has been reference and parodied well into modern times.

Owing to its age, “Pirates of Penzance” is now in the public domain, which meant
that money typically used for royalties could be spent jazzing up this year’s
annual spring musical with a more professional lighting system, a thrust stage
that puts the audience in the middle of the action and gorgeous costumes (think
pirate bling, puffy sleeves and, for the female characters, loud voluminous
dresses).

Director Cindy Lincoln said her young actors are up to the challenge of the difficult musical style and humor of the 19th century comic opera, while they are modernizing some of the jokes for a modern audience.

“The kids have embraced it, and they wholeheartedly get the humor,” Lincoln said
this week, adding, “The music [of Pirates] is beautiful so I’m grateful we have the singers. Actually we could have done a Mozart opera with this bunch.”

Read the full story in the March 13 issue of the News.