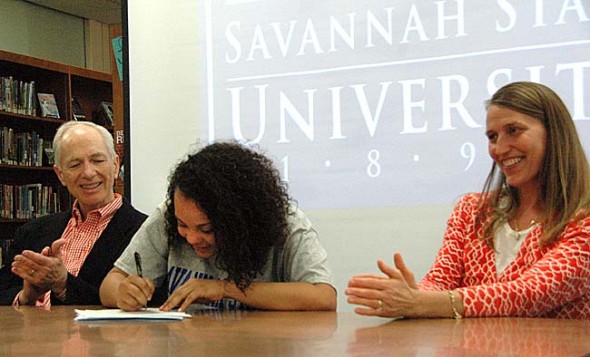 YSHS senior Rachele Orme is flanked by her parents while signing a National Letter of Interest to play golf next year at Savannah State University in Georgia on a partial scholarship. (Photo by Megan Bachman)

Orme is the first female golfer in YSHS history to play in college. The two-time district qualifier played mostly against boys during high school. Orme received a partial scholarship from Savannah State and looks forward to competing against some of the best girls in the country, she said at the signing ceremony.

“Getting to play at a Division I school was my main goal,” Orme said. “It’s a good opportunity because I will play against better golfers.”

YSHS athletic director Steve Rossi praised Orme for her dedication to playing despite the lack of a regular girls golf team and for getting a scholarship in a sport in which scholarship money is limited.

“It’s a great honor because we don’t even really have a girls golf team and she was able to persevere to overcome that obstacle,” Rossi said. “To play golf in college is one of the hardest things to do.”

Orme, who has played golf since age 8, said that practicing chipping and putting with her father, Jim Orme, all last summer helped her improve her scores enough to attract the attention of college coaches.

Next to Orme is her parents, Jim and Naomi Orme and on the far left is former YSHS golf coach Mike Reichert.