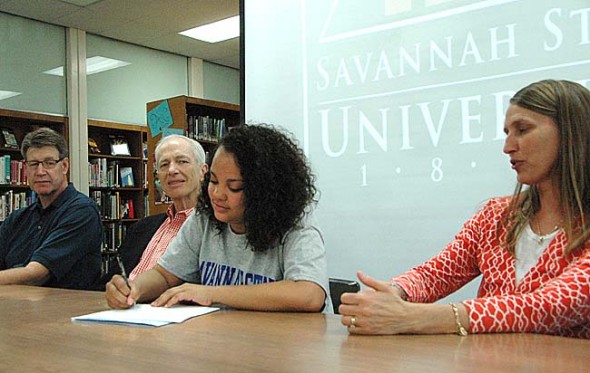 Recently Yellow Springs High School senior Rachele Orme signed her National Letter of Intent to play Division I golf at Savannah State University, a historically black college in Georgia. Orme is the first female golfer in YSHS history to play in college. The two-time district qualifier played mostly against boys during high school. Orme received a partial scholarship from Savannah State and looks forward to competing against some of the best girls in the country, she said at the signing ceremony. Next to Orme are her parents, Jim Orme and Naomi Ewald-Orme, and on the far left is former YSHS golf coach Mike Reichert. (Photo by Megan Bachman)

SOFTBALL
Girls crush Thurgood Marshall
The Yellow Springs softball team took their bats to the road last week at Thurgood Marshall. First inning hits by Chelsea Horton and Sierra Lawrence helped them explode for 10 runs to start the game. The Lady Bulldogs finished with 22 hits and a winning score of 34–8.

It was the third win in four games for YSHS as the team continued its offensive explosion at the plate.

Senior Sierra Lawrence continued her torrid hitting by going 5–6 with a double and seven runs batted in. Juniors Jesi Worsham and Chelsea Horton, who hit ahead of Lawrence in the lineup, were a combined 11–12 and scored a combined 11 runs for the game.

Worsham and Horton’s high on base percentage for the year is important “when you have a hot hitter such as Sierra Lawrence behind them,” Coach Jimmy DeLong said. “Sierra continues to take advantage of the RBI opportunities they present to her. She is zoned in right now at the plate and her hitting and our offense in front of her has been the prime reason for the team’s recent success.”
Yellow Springs put the game away with five more runs in the second inning and four in the third inning thanks to the hot bat of sophomore Ashley Longshaw. Longshaw went 6–6 and drove in two runs and scored three runs. The winning pitcher for the Lady Bulldogs was Lawrence, who pitched a complete game 1-hitter and struck out six to earn her fourth win of the year.

The next night was Senior Night for the Bulldogs as they hosted Sidney Christian. Prior to the game, Senior’s Tabea Wegers, Olivia Ramage, Rachele Orme, and Sierra Lawrence were honored. Once the game started, the Bulldogs scored four runs in the first inning and outhit their opponents 9–4 for the evening but the Sidney team took advantage of a tight strike zone by the umpire that led to an evening of walks and an easy win over the Lady Bulldogs.

BASEBALL
Boys cruise to second win
Last Tuesday, May 6, was a wonderful afternoon for baseball and the Yellow Springs faithful came out to support the boys in their final league contest of the season. Freshman Aakeem Truss pitched seven strong innings, giving up only seven hits as he went the distance for his second complete game of the season. Truss moved the ball around the strike zone and changed speeds effectively. JT Clark collected the only two hits of the game for the Bulldogs as they were stymied by the masterful pitching and defense of the Xenia Christian Ambassadors.

On Thursday, May 8, it was a different story. Coach Ben Cooper’s squad traveled to Thurgood Marshall to face the Cougars. The Bulldogs pulled off their second win of the season to double their win total of last year and bring their season tally to 2–10. Clark led the charge by going the distance for his second complete game of the season. Clark scattered seven hits and struck out 15 over seven innings, besting his previous high of 13, set earlier in the season. He had a hit and three walks in five times at the plate while Joe Plumer supplied three hits and three runs of his own. Fran Gelmi and Eric Lawhorn, and Keenan Onfroy-Curley each reached base four times in a contest that saw each of the starters reach base and seven different players score.

The Bulldogs ended the regular season on a high note as they prepared to compete in the Sectional Tournament at Arcanum earlier this week, an opportunity the team did not have last year. Earlier regular season games cancelled due to weather could also soon be rescheduled for the team.

“We’re thrilled to have this opportunity [to play in sectionals] and are hoping to get our other games rescheduled as we have a very good chance to better our record,” Coach Cooper said.

TRACK AND FIELD
15 records set at Bulldog Invite
With a record number of teams (14), the Bulldog Invitational proved to be a successful event, particularly for the YSHS boys and girls track teams. The girls finished in sixth place while the boys finished in seventh place. Bulldog athletes set or tied 15 personal bests during the course of the meet. Three freshmen garnered first places with Cameron Haught setting a new meet record in the 800-meter racewalk in 3:12.8, breaking the meet record held by Bulldog Volunteer Coach Jacob GunderKline. Ninth-grader Dani Worhsam edged out fellow freshman Olivia Brintlinger-Conn in the girls 800-meter racewalk while another ninth grader, Julie Roberts, defeated a tough 300-meter hurdle field in winning this grueling race.

Full results are at http://www.ys-track.com.

McKinney girls runner up
On Wednesday, May 7, the McKinney girls track team secured the runners up trophy at the John Gudgel Invitational meet here in Yellow Springs and the boys placed fourth out of seven teams. Once more this season the shot put was dominated by the McKinney Bulldogs, James Browing won with a new school record toss of 40´8˝ overturning Max Crome’s old record. At the girls shot put competition Amani Wagner won with a throw of 35´8˝ trumping the one-week-old school record from Jasmine Davidson by another foot. Davidson placed second with throw of 34´05˝ which was an inch further than her record throw last week. Wagner also won the discus competition with a throw of 67´11˝. The girls pole vault was also in the Bulldogs’ hands with Payden Kegley winning (7´) and Jude Meekin placing second (5´). Zach Lugo placed third in the boys pole vault with a jump over 7´. Browing won the boys high jump with crossing 5´2˝ and Dharma Crocker placed third with a jump of 4´4˝. Ket White also placed third in the long jump with a distance of 11´10˝. Alejandra Erazo placed third in the 100-meter dash with at time of 14.69 seconds.