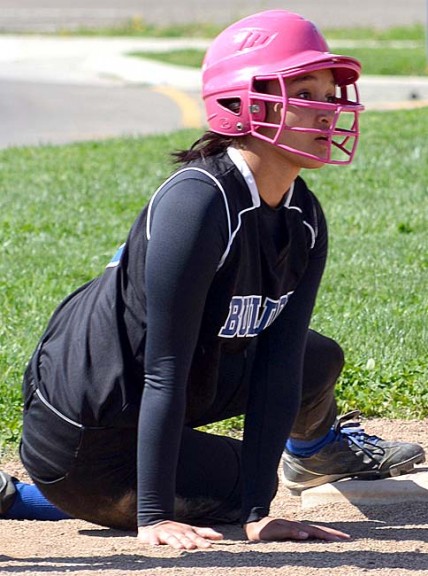 Senior Sierra Lawrence slides back to third base at a doubleheader at Belmont on Saturday. Lawrence had three grand slam home runs and 21 RBI’s for the day, during which the Bulldogs won 17–13 and 30–19. (Submitted photo by Jimmy DeLong)

Home runs are hard to come by in girls fast pitch softball. Most players would be pleased with one or two home runs for the season. Yellow Springs High School senior Sierra Lawrence had a season’s worth of home runs and then some as she exploded for three grand slam home runs, went eight for 10 at the plate with 21 runs batted in, and scored eights runs as the Lady Bulldogs swept Belmont in a doubleheader by scores of 17–13 and 30–19.

“Sierra’s swing reminds me of baseball’s Hank Aaron,” Coach Jimmy DeLong said after the game. “She uses her quick hands and strong wrists to generate the bat speed required to drive the ball deep. The ball just explodes off her bat.”

But Lawrence’s best hit of the day wasn’t a home run. In the first game the Lady Bulldogs jumped out to a 12–6 lead but Belmont rallied to tie the score at 12–12 and send the game into extra innings. The score was still tied when, with two outs and the bases loaded, Lawrence knocked in three runs with a long base hit to the outfield to break the game open and help send the Lady Bulldogs to a 17–13 victory.

In the second game, YSHS scored 19 runs in the first two innings and led throughout, winning 30–19. The Lady Bulldogs had several other offensive stars on the day. Shortstop Jesi Worsham was on base 10 times and scored eight runs on eight stolen bases. Junior Chelsea Horton got on base eight times and scored seven runs, sophomore Ashley Longshaw got on base seven times and scored five runs, and freshman Amelia Gray got on base seven times and scored four runs including a slide at home plate just under a tag. Lawrence picked up another win for the Lady Bulldogs when, after pitching a complete game she came on in relief of starter Jesi Worsham to win the second game too. Freshman catcher Danny Worsham was a workhorse behind the plate, catching both games.

The YSHS season record is now 3–5.

In the last two weeks, the YSHS co-ed tennis team played six matches. They won against Division I Fairborn and dropped the others in tough battles.

First single player Augie Knemeyer sat one match out to nurse a shoulder injury but won four of the five matches he played. At Fairborn Knemeyer paired with Meredith Rowe to bring home a dominating 6–1, 6–2 win on the first doubles court. Against Greenview Knemeyer did not give up a single game on the first singles court. At Northwestern, although Knemeyer dropped the first set, he blazed ahead to beat their number one and give YSHS its only court for that match. At Xenia Christian Knemeyer beat Jesse Holloway for a second time 6–3 and 6–4.

In Xenia the court one doubles team of Gabe Day and Nick Miller-Jacobson also brought home a definitive win 6–4 and 6–4 with strong, smart teamwork. Day also had a great singles win at Fairborn.

Henry Potts-Rubin has showed his speed, hustle and dedicated team spirit covering singles in two matches and doubles in four. He and Dylan Dietrich had a great win in Fairborn. Kasey Linkhart and Rowe have showed great promise as a doubles team and each has given their male singles opponents plenty of challenge. Linkhart had a singles win on a reserve match at Northwestern, Dylan Dietrich lost a close one in a third set at Miami Valley School.

Reed Huston and Linkhart lost a close one in the third set against Greenview and have shown talented strokes on singles courts for the Bulldogs.

“There is lots of great team dedication with this developing squad,” Coach Donna Silvert said. “The progress in stroke production and game strategy is impressive.”

Another strong outing by Liam Weigand kept the Bulldogs in the game against Middletown Christian last Thursday. It was a cold and dreary day with a lot of wind but Weigand persevered, pitching his second complete game of the season. JT Clark and Keenan Onfroy-Curly led the way at the plate with Clark reaching base all four times. The defense provided two gems with Ethan DeWine completing an athletic double play while Devon Perry and Weigand flawlessly executed a run-down, foiling an attempt to steal home.

Yellow Springs forfeited to Emmanuel Christian on Friday as several of the boys took time to concentrate on their studies in lieu of the contest.

“It was really disappointing, as one of our goals this year was to contest each game, but I think it just made us hungry to finish the season strong,” Cooper said.

DeWine followed Weigand’s complete game with one of his own against Troy Christian on Monday. DeWine brought it for six strong innings after a brutal first inning of defense. Once the Bulldogs settled down, they competed well and showed a lot of heart. Although it was their best hitting performance of the year, the strong defense of Troy Christian held them to only two runs. The Bulldogs threatened in every inning, supported by consistent team hitting as well as long drives by Clark, Fran Gelmi, Joe Plumer, and Eric Lawhorn. Gelmi added a putout and an assist with a fantastic throw from center field to nab a tagging runner at third.

The YSHS track and field squads performed well at the Mechanicsburg Invitational meet last Friday night. The girls squad was led by the underclassmen quartet of three freshmen (Olivia Brintlinger-Conn, Maya Creighton and Julie Roberts) and one sophomore (Charlotte Walkey) as they sped to two first-place finishes in the distance medley and 1600-meter relay. The boys squad was led by the second-place finishers Cameron Henderson, Bryce White, Carter Collins and Ed Johnson in the 800-relay and second-place finishers — in the Ironman 400-meter relay — Cole McNeal-Harding, Kalonji Cross, Zak Kimmet and Aaron Harshaw. A total of seven personal bests were recorded on the night as the girls squad finished in sixth place and the boys squad tied for fifth.

On Saturday, May 3, the McKinney track team crowned its 2014 champions with the traditional multi-event competition consisting of a sprint, jump, throw and middle-distance run. James Browning won the boys competition with a 13.75 over 100 meters, a 5´0˝ in the high jump, a 88´11˝ in the discus and a time of 2:38.60 over 800 meters. All four performances were the events top performances of the day.

Lily Bryant won the girls competition and posted two best performances of the day — a 63´0˝ in the discus and a 3:21.32 over 800 meters. In the first round Amani Wagner threw the shot put to 32´9.5˝ and trumped the old school record of 32´8.5˝ held by her team mate Jasmin Davidson. In the third round Davidson countered and catapulted the iron ball to 33´5.5˝, reclaiming her record. Payden Kegle had the fastest 100-meters girls hurdle time in 21.58 seconds. Alejandra Erazo posted the fastest 100-meter dash time in 14.73 seconds. Jude Meekin posted the fastest girls 1600-meter time in 7:10.86 and Raven James had the farthest long jump of the day with a 12´7.5˝. Zach Lugo had the fastest 1600-meter boys time in 6:36.79 and Josh Williams had the farthest shot put toss with a 26´1˝ and the farthest long jump with a 14´1˝.