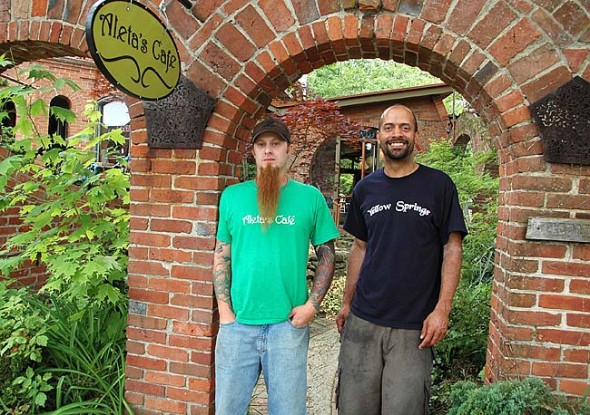 Gregg Pastorelle, left, and Matthew Willis opened Aleta’s Café at the Oten Gallery this week. The new restaurant features panini sandwiches, pizza on naan bread and salads served in a relaxed, casual envrionment. A grand opening is planned for Friday, June 6, when the restaurant is open from 11 a.m. to 11 p.m. (Photo by Megan Bachman)

New restaurant at Oten Gallery— Twist on sandwiches at Aleta’s

Owners of the village’s newest restaurant say the beautiful hand-built brick Oten Gallery will attract diners, but it’s the fresh, delicious food that will bring them back.

Aleta’s Café, at 303 Xenia Ave., will serve hot panini sandwiches, pizzas made with naan bread and salads for lunch and dinner seven days a week. The cafe opened to diners over last weekend, but plans its official grand opening for Friday, June 6, from 11 a.m. to 11 p.m.

Matthew Willis and Gregg Pastorelle said they are excited to open the 40-seat restaurant after 11 months of work renovating the space to comply with Greene County regulations.

“We took a building that had so many things against it being a restaurant and made it a restaurant,” Pastorelle said of the task. The duo built the kitchen “from the ground up,” he added, and designed the menu within the limits of an all-electric kitchen since it was too expense to add gas lines or a vent hood. They received their food service operator permit last week, the final hurdle before opening.

After the Yellow Springs Arts Council vacated the Oten Gallery, Willis seized the opportunity to open a restaurant and put down an initial $600 in November 2012 to reserve the space ahead of a tenant who wanted to put in a hair salon. Pastorelle, who also had long wanted to open a restaurant, joined the effort last year because of its location in “the coolest building in town,” which was built and is owned by Alan MacBeth.

“Our approach is good service, good food and a good environment — and the environment is already here,” Pastorelle said. The two envision a casual, relaxed atmosphere, with seating both inside and throughout a large tree-covered brick patio in the back that is especially magical at night, they said. The restaurant is not licensed to sell alcohol, but diners can bring along their own for a small fee, owners said.

Willis, 38, and Pastorelle, 34, bring nearly 30 years of restaurant experience between them to Aleta’s. Pastorelle, a graduate of Columbus Culinary Institute, has cooked for 18 years, including at fine dining establishments and most recently at Sunrise Café. A native of Cleveland, he now lives in Selma near South Charleston. Willis has 10 years of restaurant experience, including at Peach’s Grill and Friends Care Community. Willis, born in Cedarville, lives in Yellow Springs.

Having worked at many Yellow Springs restaurants, the owners say they don’t want to duplicate other local offerings, but add something new to the local food scene. The menu will also change seasonally.

“We’re looking for things that are different from what everyone in town already has,” Pastorelle said. “You can’t find any place to get a hot sandwich and just chill. And you can’t get much else than pizza past 9 p.m. in town.”

Owners say they hope to attract tourists to the restaurant, especially after the 28-room Mills Park Hotel is complete next door, which will supply hungry customers and help extend the downtown business strip. But ultimately it is critical Aleta’s is frequented by villagers, Willis said.

“You can have visitors but it’s the people of Yellow Springs that will be the core,” Willis said. “Those are the people who are going to be coming back 10 times per month, as opposed to the people who come from Dayton once a month.”

Willis and Pastorelle met 12 years ago through the local music scene, and their love of music is infused through the restaurant’s décor, with scattered rock memorabilia and posters of Kurt Cobain, Jimi Hendrix, Tupac Shakur and Bob Marley overlooking tables.

The name of the café honors Willis’ triplet sister, Melanie Aleta Willis, who died in 2009 from Graves’ disease. Melanie showed Willis how to cook so he could find a job at Friends Care, Willis explained.

Willis and Pastorelle opened the restaurant with personal savings. Both have young children and hope the restaurant is a good investment financially as well as a chance for self-employment.

“I’ve always dreamed of being my own boss,” Willis said.