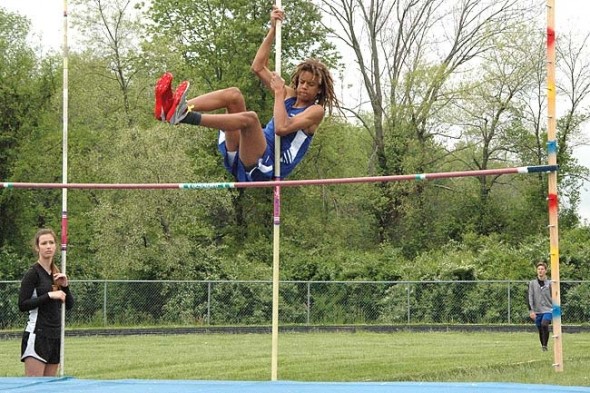 YSHS track athlete Oluka Okia launched over the pole vault bar at the MBC championships at YSHS on May 17. Later in the day, Okia won the conference title in the high jump. (Photo by Megan Bachman)

Yellow Springs hosted the 17th annual cold and rainy Metro Buckeye Conference track and field championships on May 17. Both the boys and girls squads performed admirably as evidenced by their respective runner-up finishes. The girls repeated their runner-up finish from 2013 while the boys improved upon their fourth place finish from the previous year.

A large contingent of Bulldogs participated in the district track meet at Dayton’s Welcome Stadium with the boys team finishing in 10th place and the girls team earning a solid 14th place. The district meet represents the thrill of victory and the agony of defeat, as only two Yellow Springs High School representatives qualified for this weekend’s regional meet at Troy (only the top four finishers at the district meet qualify for the regionals).

Qualifying for regionals in the boys meet was the 800-meter relay team, which finished as the district runner up with a time of 1.34.53. On the squad are Cameron Henderson, Bryce White, Carter Collins and Ed Johnson.

The boys 400-meter relay team missed regionals by just 2/100ths of a second with a fifth-place finish in 46.12. That team included Henderson, White, Hafiz Mensah and Johnson. Henderson came close in the individual 200-meter event, with a sixth-place finish of 24.30 seconds. Also racing well were seventh-place finishers Kaner Butler, who ran the 300-meter hurdles in 44.67 seconds, a personal record, and White, who ran the 200-meter dash in 24.68 seconds.

Bulldogs who competed, but did not place in their event, were Levi Brown, Cameron Haught, Zak Kimmet, Aaron Harshaw and Connor Gravley-Novello.

Hurdler Julie Roberts was the lone YSHS female to qualify for regionals. The freshman came in fourth place in the 300-meter hurdles in 49.73 seconds.

On Saturday, Roberts ran the race in 50.72 seconds, good for 13th place but shy of qualifying for states.

Meanwhile, at districts, the girls 400-meter relay team narrowly missed a regional berth — by just 1/100th of a second — when it finished in fifth place in 54.04 seconds. Running on that squad were AnnDee Pettiford, Camara Cross, Olivia Brintlinger-Conn and Roberts.

Charlotte Walkey ran her 800-meter race in 2:33.16, good for sixth place. Kennedy Harshaw also finished sixth, in the shot put, with a toss of 31 feet and 4.75 inches. Also contributing solid district performances were eighth-place finishers Pettiford (with a long jump  of 14´ 8¼˝), and the 1600-meter relay team of Walkey, Brintlinger-Conn, Roberts and Maya Creighton (4.39.40). Creighton also competed in the 1600-meter run at districts, finishing in 6:13.99.