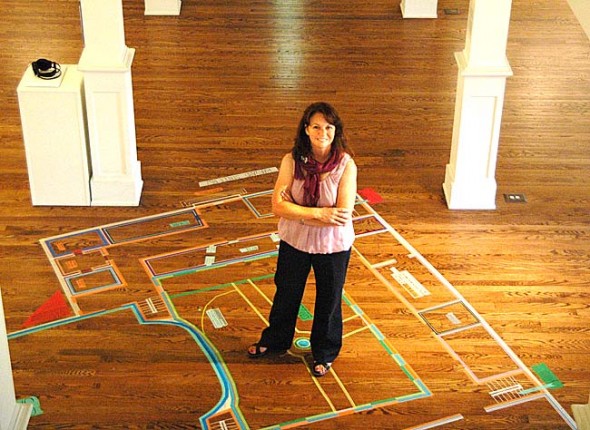 Jennifer Wenker is the new creative director of the Herndon Gallery on the Antioch College campus. (Photo by Jenn Wheeler)

After leaving the art world behind for two decades to pursue a career as a registered nurse, Jennifer Wenker, the new creative director of the Herndon Gallery at Antioch College, has returned to art with an enthusiasm that can be seen reflected in her involvement in a wide range of art organizations in Dayton and Cincinnati, as well as her own growing body of work. This return is all the more impressive given that she completed her MFA in eco art activism at the University of Cincinnati only two years ago.

Recently hired to replace Dennie Eagleson at the Herndon Gallery, Wenker comes to Antioch from Greenfield, Ohio, a small town about 45 minutes southeast of Yellow Springs. She was born in Greenfield, where her family has lived for eight generations, a connection that she feels has had a strong influence on her art.

All of the art and activist organizations with which Wenker has worked are based in southeastern Ohio, including the Marianist Environmental Education Center, which is affiliated with the University of Dayton, and SOS Art, a yearly art show in Cincinnati. The organization of which she feels the most proud, though, is the SPARK! Creative Artspace, which is centered in her hometown. The group describes themselves as being committed to “preserving and strengthening the culture of foothills Appalachia as well as introducing and spreading an appreciation of the arts in all their variety.”

The idea for SPARK!, she said, was formed while she sat in the grass at one of her daughter’s soccer games making a list of all the things she loves about creating. She then shared some of her ideas in conversations with friends, talking about the ways downtown Greenfield had changed and why people leave small towns for big cities. During these conversations, she said, there was a growing realization that “our empty downtown spaces would never fill up with what they had before,” so she and her friends decided to organize a conceptual space in which they could be creative together and share resources, collaborating with existing businesses and the owners of empty shops to move SPARK!  into different locations as they became available. She describes the group as loose and amorphous. The people involved are just those who want to be, and this organization style has worked well, Wenker said. The group has put on a number of successful “pop up” events, including “artistically lighting” a barn near New Petersburg and a jug band concert and auction to raise money for a permanent location for SPARK!

“It’s really done good things for our community,” she said.

Much of Wenker’s work relates directly to the college’s commitments to sustainability and community. One of her shows from 2012, “Deeply Rooted Drifting,” centers around the development of emotional connections to place and the way people are always physically interconnected with certain spaces. Her own bio highlights that Appalachia, which she has considered her home for most of her life, has long been “a financially impoverished area rich in scrappy resourcefulness,” which is certainly reflected in her creative output and her participation in local art and environmental activist work. Other pieces connect more obviously to sustainability, incorporating and recycling paper and cardboard from her own family’s waste stream.

Wenker sees herself as both a naturalist and an artist, drawing influence for her work from her training in life drawing and pre-medical illustration during her undergraduate work at Morehead State University in Kentucky.

“I really loved the hand-drawn medical and botanical illustrations,” she said, but she lost interest in the field when digital illustrations began to replace the precise pen-and-ink sketches for which she had been trained. After several people in her family important to her had become sick, she said it felt natural to move from medical illustrations into the medical field itself, where she would spend the next 21 years.

The effects of these experiences stretch well beyond her own artwork into the way she understands her place in the Antioch community. She sees her role as the creative director as similar to her relationship to nature. She wants to be an organic part of the community rather than somebody working as an isolated individual. Her work as a curator at the Herndon is very collaborative, she said.

“We have a democratic process for how we select what might be interesting for shows,” a process that involves the Arts at Antioch Committee, which is comprised of student gallery assistants and volunteers, arts faculty, interested staff and others from the Yellow Springs community.

Although Wenker has only been at the Herndon for a short time, she’s already excited about several possibilities for future shows.

“I would love for more of the art to happen out there,” she said, gesturing toward her window that opens onto the horseshoe connecting three of the most active buildings on campus.

She is particularly interested in giving a voice to “quieter things” that may fall outside of what is generally considered to be fine art, including possibly reprising one of her shows that has already seen several incarnations, “Outsiders: An Exhibition of Work by ‘Nonhuman’ Others.” The show features found works created by “wasps, bees and birds,” among others, in part as an effort to bring anthropocentrism in art into question. This time she would like to see it as an invitational that might include Glen Helen as a part of the exhibition.

She would also like to host shows that would align with Antioch’s curriculum outside the arts, possibly including politically oriented shows. Drawing on inspiration she found while teaching conceptual drawing at the University of Cincinnati, she has recently been interested in conceptual mapping and would like to bring those ideas into the Herndon. She is fascinated by the beauty of internet search mapping, a process that makes visible for anyone connections between internet sites that would otherwise remain unseen. This kind of conceptual mapping, she said, has been applied in a number of other ways, and can be used to visualize connections as diverse as links between political figures and the chronology of interpersonal relationships.

Her enthusiasm is not limited to her work in the Herndon Gallery, however. Wenker said she has found the atmosphere all over Antioch exciting and energizing.

“I would have gone to college here if I had known about it,” she said.

Wenker noted that people on campus seem more optimistic than she had been expecting given how busy Antioch has been during the past three years working toward accreditation. She speculated that the excitement is a result of the recent good news concerning the college’s candidacy for accreditation. She described the mood surrounding the community meeting on Tuesday, June 8, during which she was introduced to the community, as light and buoyant, and said she loves Antioch already. She feels excited to have begun working at Antioch at such a positive time in the college’s history.