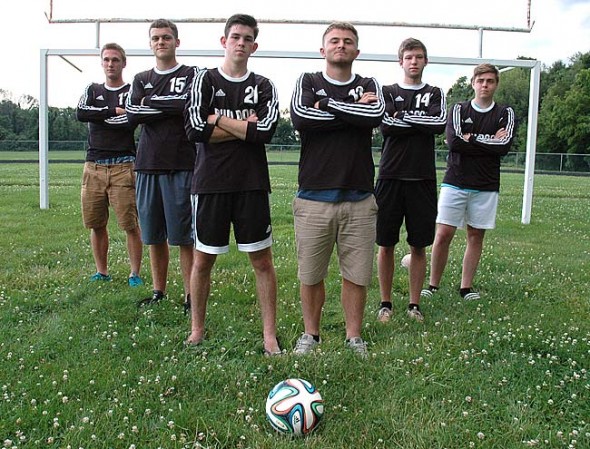 The World Cup may have ended on Sunday, but a massive local soccer championship is just kicking off.

This weekend a new soccer tournament will bring to the village more than 500 high school players and 24 teams in a pre-season battle. And while World Cup host nation Brazil failed to deliver its country the cup, the Yellow Springs High School boys team will have a chance to defend its home turf and bring home the top trophy for the Bulldogs.

YSHS Coach Ben Van Ausdal said he is confident the contest will be “fun, competitive and exciting,” with teams representing divisions I through III and traveling from as far as Toledo, Cincinnati, Columbus, and Middletown. Top teams participating include Bishop Fenwick, a #4 statewide seed last year, Bellbrook, which was as high as #7 in the state, Maumee, Sycamore-Cincinnati, Waynesville, Clark Montessori and league rival Dayton Christian, according to Van Ausdal.

The tournament is organized like the World Cup, with round-robin group matches on Friday and Saturday and elimination games on Sunday among the group stage winners and runners up, culminating in a final championship match on Sunday at 7 p.m. Van Ausdal hopes villagers come out to watch quality soccer.

In addition to making money for the boys soccer program and boosting the town’s economy, the tournament will help Van Ausdal’s players gain experience, with two teams from YSHS set to participate in the tournament.

“It’s all about getting experience for my players,” Van Ausdal said. “I wanted them to get as much playing time as possible.”

The YSHS boys soccer team is gearing up for what it hopes will be a successful season with a healthy roster of 26 players and six returning seniors. Expectations are high for the Bulldogs, who went 13–1–2 last year, won the Metro Buckeye Conference title outright, defeated perennial rival Springfield Catholic Central and cruised to three straight wins in the post-season tournament.

Van Ausdal said the team has a “strong bond” with a lot more size and strength than in previous years.

The six seniors on this year’s YSHS team are a blend of finesse and force, according to their coach. The physical Bulldogs look to intimidate their opponents on both sides of the field this year, all the while dazzling them with crisp passing, robust teamwork and strong finishes, they said. Players can’t wait for the opening whistle.

Ian Chick, forward: Assets: My role is to score gets and get assists. My strengths are my finishing, my passing and my being psychologically strong. I can be a bully.

Goals: Winning districts and beating Catholic Central — the two components of a successful season. Also getting past the district finals.

Fielding Lewis, left back: Assets: I’m a good defender. I’m pretty good at intimidating and getting in people’s heads.

Goals: This is our season. We’ve going to score goals and win games.

Nathan Miller, midfielder: Assets: I’m good with my feet. I beat people a lot and I give a lot of assists.

Team assets: We all grew up playing soccer together and I think we got to know each other and our individual styles. Because Yellow Springs can’t recruit like other private schools, we count on that. Our exchange students also fit in pretty well.

Liam Creighton, sweeper: Assets: I clear the ball. I’m the last line of defense to keep them from scoring. The Alamo. With my height I measure up to people well and win headers and I have good speed.

Jared Scarfpin, center midfielder: Assets: I can calm everyone on the team. I have to both defend and get up the line and finish a ball.

Team Assets: We have speed, athleticism and the chemistry to find each other during an attack.

Goals: To win districts we just need to keep our heads and play our game.