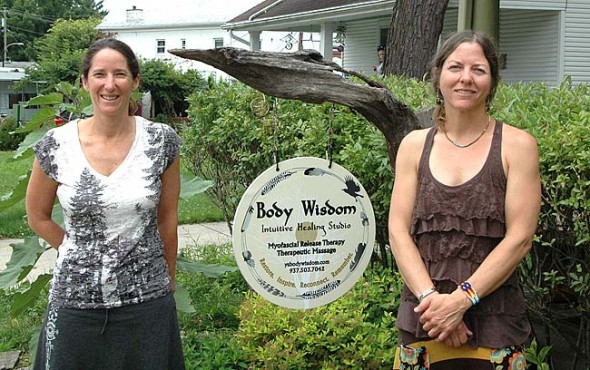 When Julie Pies and Patti Mielziner returned to Ohio to be closer to their immediate family, they hoped that their newly opened bodywork practice in Yellow Springs, Body Wisdom, would help them to create some new family as well. Through their work together over time with their clients and patients, Julie said, they come to be like family.

“You get to see and be with them during changes in their life,” said Pies, who believes working with clients over the course of these changes is an important aspect of preventive care.

Pies has practiced physical therapy and Mielziner has been a personal trainer for over 20 years. Although they both originally come from Ohio, Julie from Cincinnati and Patti from Cleveland, they lived in San Francisco for most of that time. Pies said that she prefers working at a small, private practice, something that was feasible in San Francisco. Working in a small practice, she said, allows her to focus primarily on the quality of her work rather than trying to see as many clients as possible. She feels that this focus on quality is particularly important in the kind of manual therapy she practices, because it allows her to establish long-term relationships with her clients.

Yellow Springs seemed to Pies and Mielziner to be an ideal place to open that kind of small, personal establishment. While a number of massage therapists and chiropractors already work in Yellow Springs, what Body Wisdom offers is different from other kinds of manual therapy, according to Pies. Massage usually follows a kind of recipe, treating the whole body or focusing on a particularly tense area without taking into consideration that another part of the body may have played a role in creating that tension. In contrast, myofascial release, one kind of bodywork practiced at Body Wisdom, seeks to address the causes of tension and pain by creating a plan for treatment specific to an individual’s problems. Body Wisdom also offers Thai compression therapy, neuromuscular therapy, and movement training, which they use in conjunction with myofascial release to treat a wide range of symptoms, including chronic pain, athletic injury prevention and recovery, and women’s health issues.

One of the founders of the myofascial release technique, John Barnes, says on his website that a number of factors can be at work in the development of “myofascial restrictions,” including trauma, inflammatory responses, and surgical procedures. These restrictions cause pressure that creates painful tension in the body, which should be addressed at its root rather than at the level of the symptom, Barnes writes.

Often, Pies and Mielziner said, the sources of the pain can be found in a different part of the body than presents the symptoms that bring a person into their practice. For example, a problem with shoulder tension and pain might be caused by a problem with a person’s posture that is most visible in their hips or chest.

“We start every session by doing an analysis of people’s alignment from all angles,” Mielziner said, “so that we can find where they’re having issues.”

This individual analysis gives Pies and Mielziner an opportunity to see how a client’s posture is out of normal or neutral alignment. Once they have determined how a client holds themselves, they have a better understanding of what areas of the the client’s body need the most attention during their session. It also helps them to suggest changes the client can make to improve their posture to avoid recurring problems.

A person’s posture can have a great impact on their health, Pies and Mielziner said, and it takes work to maintain good posture. This work includes attention to a person’s tendency to move away from a neutral alignment, and the two women are committed to teaching their clients to be aware of these tendencies. Education and prevention are a focus of their work, something else that they believe sets them apart from other manual therapy practices in town.

“Not only do we do the manual therapy part, but we also offer functional training,” Mielziner said. “We retrain the muscles so that the right ones are working so that the treatment can be lasting,” which prevents people from falling into the patterns that caused the pain or tension in the first place.

As one way of helping to prevent future problems through education, Body Wisdom currently offers free treatment to all of their clients’ children.

“We want to educate kids on being more present in their body and aware,” Pies said. The two both emphasized the importance of maintaining a consistent practice of bodywork over time, which they believe should begin in childhood.

“As people progress through life, different issues may arise,” said Patti.
The space in which they work at 117 S. Walnut St. reflects the pair’s interest in developing close relationships with their patients. The two work out of their house, and there are two rooms already being used for treatments. Both rooms feel cozy and comfortable. The first floor treatment room is well lit by a large window on the front of the house, and the upstairs room feels just as warm and inviting.

Pies said that she would like to develop Body Wisdom into a smaller version of a treatment center in Sedona, Arizona, Therapy on the Rocks, where she worked part-time since 2006. She and Mielziner are in the process of renovating one of the upstairs rooms in their practice to serve as a bedroom where a client could spend the night after a treatment. This would provide the possibility for Body Wisdom to offer “mini-intensive” programs, which would involve periodic treatments over a couple days. Pies and Mielziner feel that doing this kind of work would increase the likelihood of developing the family-like connections with their clients that make their practice worthwhile.

Their website, ysbodywisdom.com, offers more information on the treatments offered.