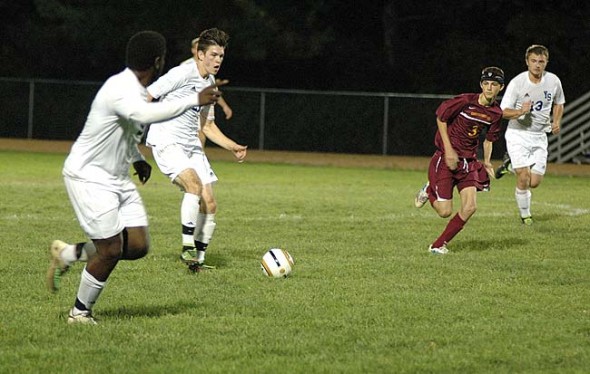 Varsity ends season with a win

The YSHS varsity volleyball team took on conference leader Emmanuel Christian on Oct. 7 at home.  As usual, the Bulldogs put up quite fight.

“This was the last home game for the Bulldogs and they played the game with everything they had,” Coach Chris Linkhart said. Despite the great playing by Yellow Springs they fell in three close games 18–25, 16–25, 25–27.

On Oct. 9 the YSHS volleyball team finished up its regular season at Middletown Christian. The Bulldogs played strong and maintained control of the entire match winning in three games, 25–18, 25–18, 25–13. Smith, Rowe and Neilsen led the team with nine points each. Rowe and Neilsen both put down six kills while Linkhart put up 11 assists, followed by Julie Roberts with seven assists and Malone with five assists.

After a hard loss to conference rival Dayton Christian on homecoming, the Yellow Springs High School boys varsity soccer team bounced back with four straight wins this week. The team closed out its season 3-0 to finish 8–3–6 and also brought home its first tournament victory on Monday.

The Bulldogs started out the week by soundly defeating Miami Valley 5–0, the largest margin of victory on the Rams’ turf as long as YSHS Coach Ben Van Ausdal can remember.

Ian Chick and Ethan DeWine each scored two goals and Jared Scarfpin added another, while the defense”really held their own,” according to Van Ausdal. That win carried the team on to its next big match, at Fairborn. In that matchup the defense, anchored by Liam Creighton, Henry Potts-Rubin, Fielding Lewis and Kaner Butler, had another shutout. Meanwhile, the offense scored three goals. Nathan Miller, who has been injured much of the season, opened up scoring at Fairborn, followed by goals from Scarfpin and Chick.

Then against Kenton Ridge for the last regular season home game, YSHS started flat and went down 1–0 until the team’s senior leadership pumped up the team in a halftime huddle. In the second half the Bulldogs scored four unanswered goals to win 4–1. Scarfpin found the net twice, while Chick and Joe Plumer each scored one.

In the opening round of the sectional tournament, YSHS cruised to an easy 6–0 win over Northeastern at home. Northeastern didn’t get a single shot on goal. YSHS goals came from Chick (2), Scarfpin, Plumer, Creighton and Jeremiah Scott.

“We have been playing really well,” Van Ausdal said. “I think we’re dangerous team in the tournament.”

The YSHS girls soccer team closed out season play with a busy three-game week.  On Oct. 7 against Miami Valley at home on Senior Night, seniors Jesi Worsham, Kaila Russell, Gigi Niang, and Rina Mac-Lamptey were all recognized for their contributions to the team.

The seniors also all started the game on the field and Mac-Lamptey led the first offensive push forward, while Niang contributed defensively and Worsham and Russell anchored the midfield. The Bulldog defense held off the Rams until 30 minutes into the game when they managed to sneak one past junior goalkeeper Ashley Longshaw. The second half was a hard fought game but the Bulldogs were unable to find the net.

The Bulldogs traveled to Northeastern to play the last JV/Varsity doubleheader of the year.  The JV match was an exciting back-and-forth game.  Northeastern found the goal first but the Bulldogs came back to tie with a breakaway finish from sophomore Dani Worsham and the half time score was 1–1.

In the second half freshmen defender Reese Elam and midfielder Erin Mooneyham helped to consistently transition to offense and sophomore Erica Ranard had multiple shots on goal but the Northeastern keeper got to them before they found the net.  Sophomore Caylen Hall kept the defense organized and the Jets out of the Bulldog net until a late second half shot found the corner. The Varsity played a tough game on a wet field and fell to the Jets 7–0.

Then on Oct. 11 YSHS traveled south to Middletown Christian for the last game of the season. The Bulldogs started off with the ball but Middletown gained possession and put in a quick goal. The defense anchored by freshman Greta Kremer and junior Ursula Kremer regrouped and junior midfielder Alice Miller closed down the middle to force Middletown to the outside. Yellow Springs freshmen Ella Comerford and Alaina Hoff worked the ball up the outsides of the field into the center for junior Ayeshia Allison but the Bulldogs were unable to get past the Middletown all-conference sweeper.

In the second half offensive pressure was more consistent with Freshmen Amelia Gray and Yasmine Longshaw pushing the ball forward but the Bulldogs were unable to find the back of the net and fell to 0–16 for the season.

The YSHS girls cross-country team came in second place out of two teams qualifying for team play at the at the Metro Buckeye Conference championships last Saturday at Xenia Christian. Charlotte Walkey led the Lady Bulldogs with a strong run of 21:56, which earned her sixth place out of 33 runners. Olivia Brintlinger-Conn trailed by just 12 seconds, placing eighth in 22:08. Also running strong for the team were Maya Creighton (24:01, 14th place) and Emma Romohr (28:43, 29th place).

The YSHS boys cross-country team ran as individuals, but not as a team, at the Metro Buckeye Conference championships. Levi Brown finished in the top slot for the Bulldogs, 14th place, with a run of 19:18. Zach Brintlinger-Conn followed in 31st place in 21:30. Donnie Isenbarger  ran the course in 23:47, good for 41st place. Forty-nine runners finished.

At the Metro Buckeye Conference championships, McKinney runners fared well as individuals. Sole McKinney girl runner Bella Edwards won the 3200-meter race with a time of 13:21. She bested 19 other runners on the day.