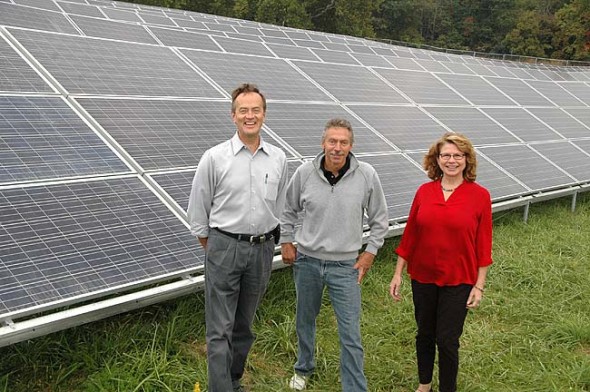 A one-megawatt solar farm recently popped up on Antioch College along Corry Street as part of the college’s plan to become carbon neutral.

Around 3,300 solar panels were erected behind fences on five acres of Antioch property commonly known as a the “golf course.” The panels could begin turning sunlight into electricity for the college later this month, according to Physical Plant Director Reggie Stratton.

A ribbon-cutting ceremony for the Antioch solar farm is 5 p.m. Friday, Oct. 10, before the annual community potluck.

The solar installation will generate 1.2 million kilowatt-hours per year and is expected to offset the electric consumption of Antioch’s $8.8 million geothermal heating and cooling plant, according to a news release.

By 2018, an estimated 90 percent of Antioch’s electric consumption will come from renewable sources as the college looks to be among the first in the nation fueled almost exclusively by green energy, the release added.

Read more in the Oct. 2 issue of the News.