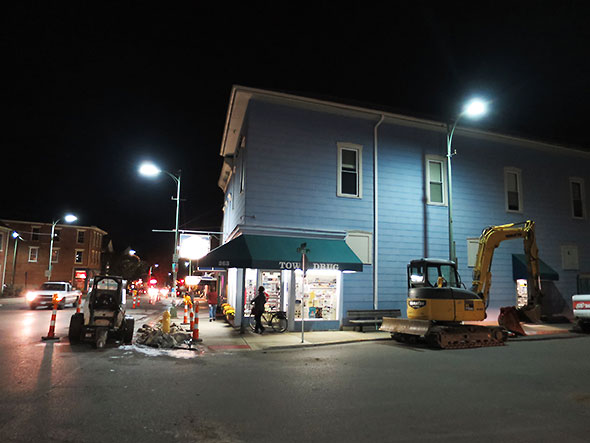 Downtown Yellow Springs needs us. In this month of November, our local businesses need our presence and as much support as we can muster. Downtown is in the midst of a streetscape renovation, the second phase of three, and the disruption is having a depressing effect on “Black November”, the month in which the holiday shopping season kicks into gear. Venturing downtown has its challenges presently—especially on the east side of Xenia Avenue—but it also has its rewards as we witness the shocking, stunning, unsubtle change that is unfolding underfoot.

The pear trees came down on the third of November. The sudden absence of their overhead canopy was immediately and deeply felt. Normally at this time of year, our downtown pear trees are strung with white holiday lights and welcome merrymakers to the village with twinkling winks. Instead, the space that the trees branches occupy went starkly dim. Their trunks were cut to a level just below rib cage. Under our feet, sawdust and green leaves littered the sidewalk and street. 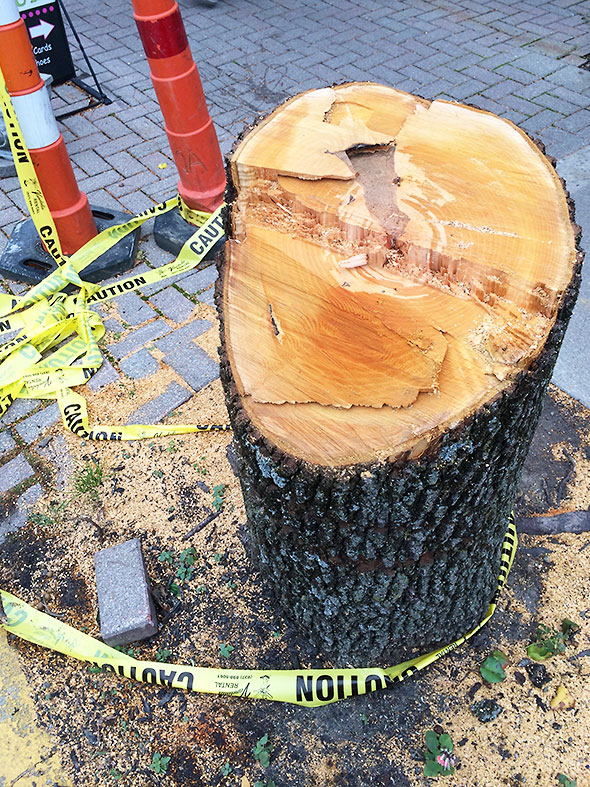 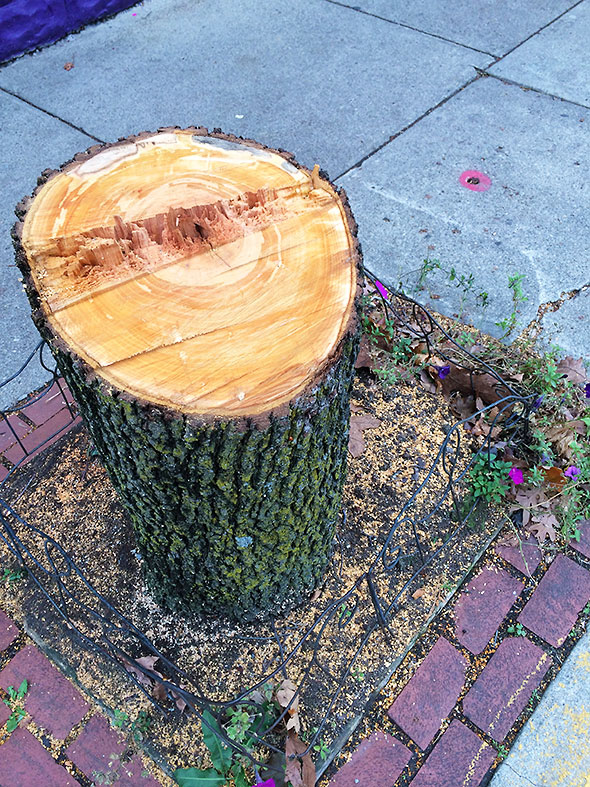 I walked the line of trees two days later. I looked into the crosscut of each tree as if at a wake…taking in the closed-eyed face of a newly departed friend. Tree rings—surprising in their number—recorded the pears’ common past. Their final fate was told by the set of intersecting cuts and by the splintered line that represented the irreversible unbinding of sturdy limb from rooted base. 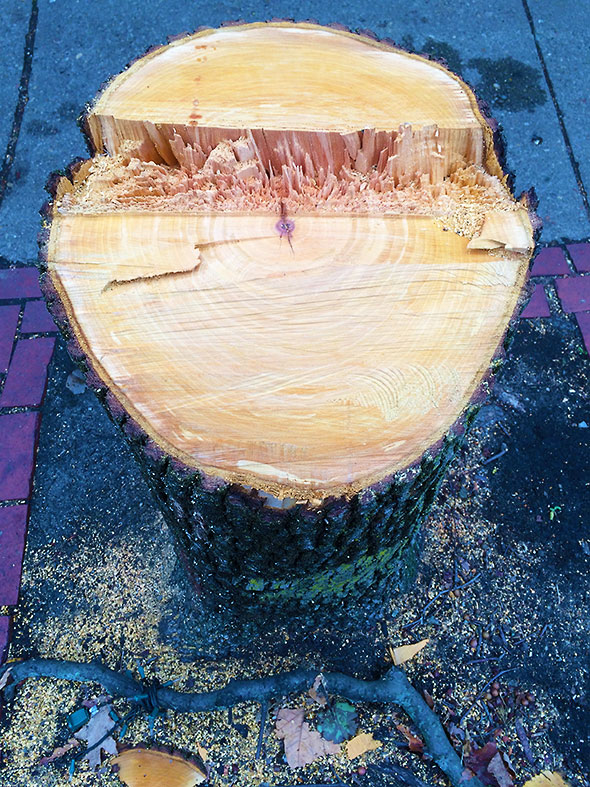 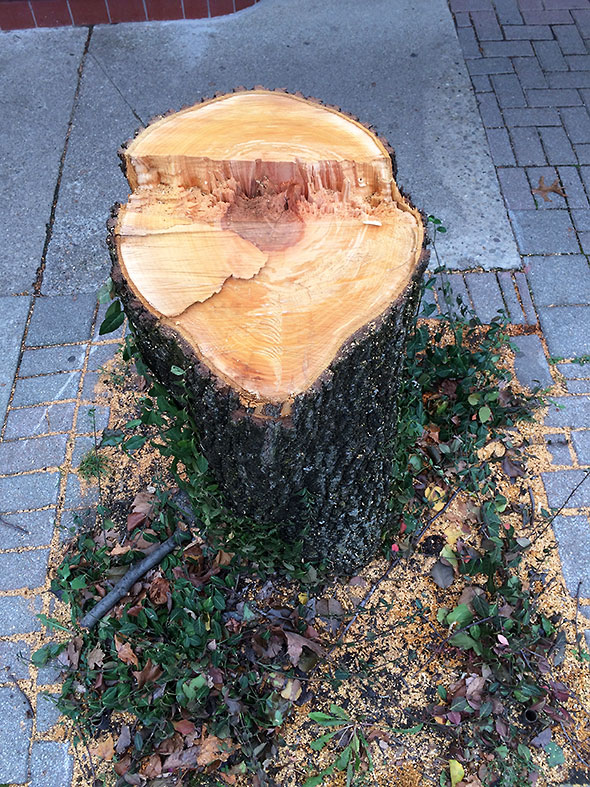 While walking among the tree litter at the curb, I found a cluster of pear. The cluster was attached to a sprig of leaves only just turning autumnal brown. The Callery pear itself was small and round, the size and shape of a plump cranberry. Its color was a blush of antique gold and red. I marveled that something so small and unassuming could cause so much trouble. The presence of the fruit shows that the ornamental tree—once assumed to be sterile—has cross pollinated with a similar plant in the neighborhood. The fertile fruit is hard for now but once softened by frost the birds swoop in and feast. If transplanted in the glen by the birds’ droppings, pear saplings can compete handily against native trees and even against the invasive honeysuckle. 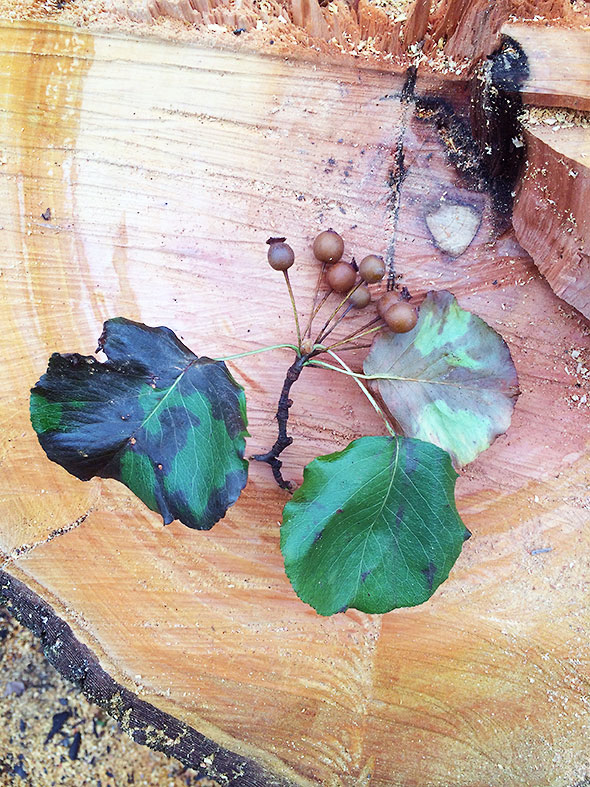 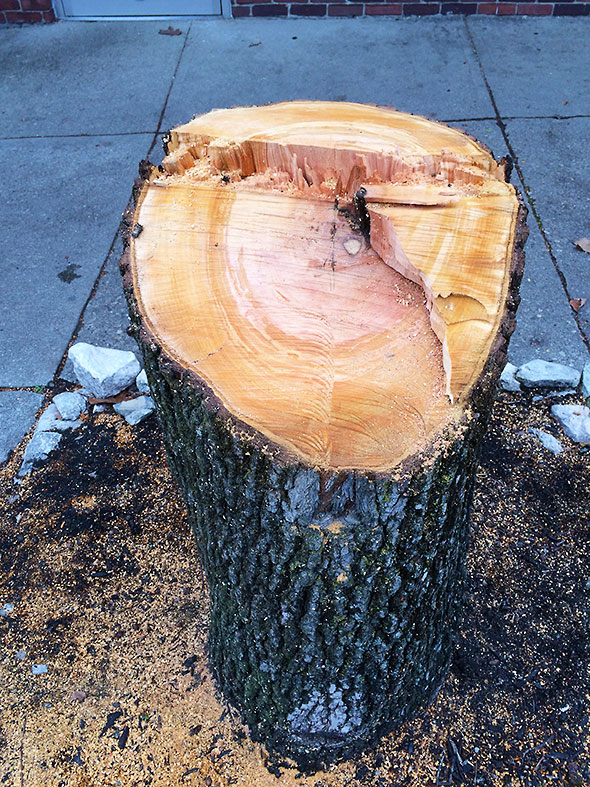 Finding fruit hit home why these beautiful trees—still handsome in their later years—must be replaced by very different trees in the renovated streetscape. The health of the pear trees in their challenging curb side beds and the deep green of their leaves this far into autumn tells me of their uncommon ability to adapt and thrive. Pear trees bloom and leaf early in Spring and shed late in Autumn. What made them enduring, colorful companions in our downtown made them a threat to the native trees within the neighboring glen. 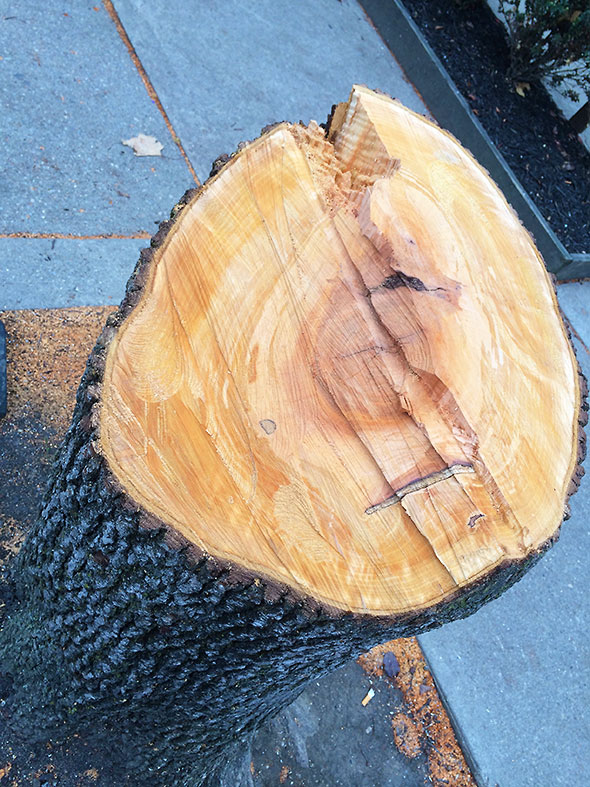 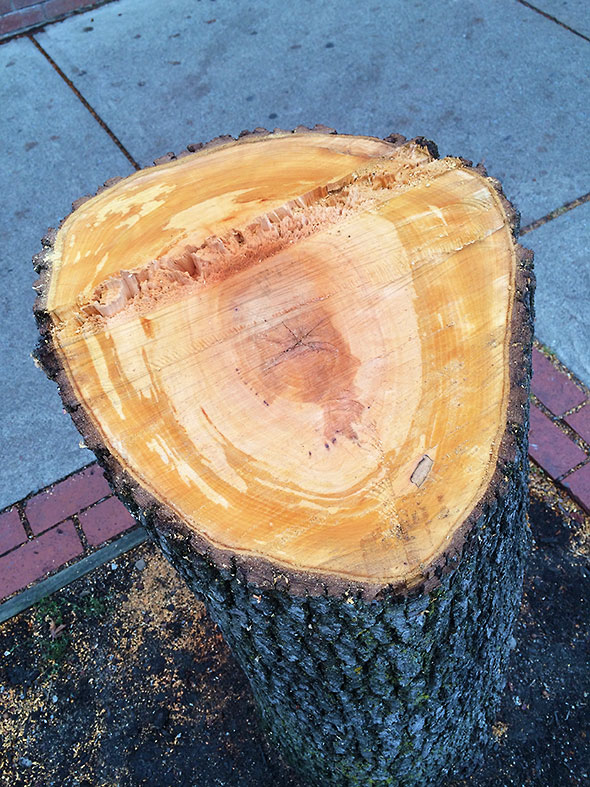 Still, I held close the powerful memory of how the fleshed out branches from these downed trees greeted my first arrival in Yellow Springs twenty years ago. I took my time weaving down the street to appreciate each eclectic character. These trees contributed much grace to their designated spaces. I gave each tree soul my heartfelt thanks then stepped from the curb back onto the sidewalk to make my way to work. 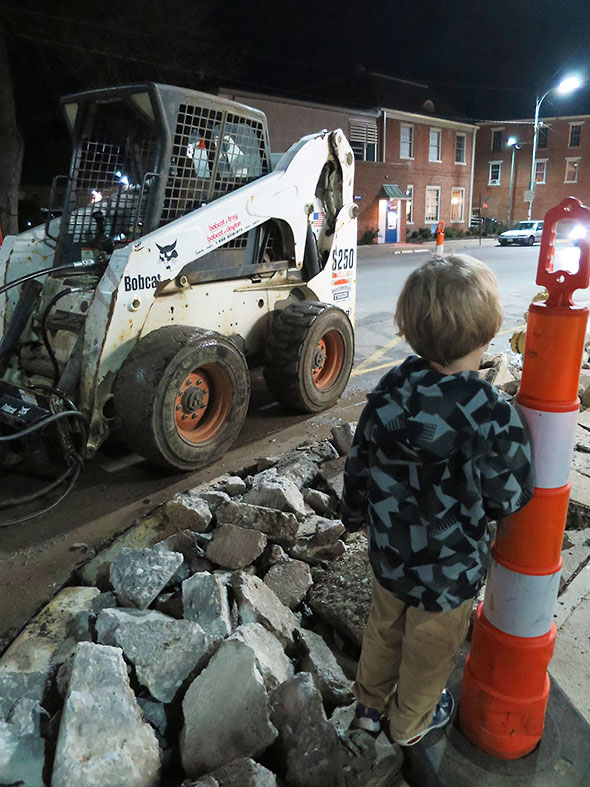 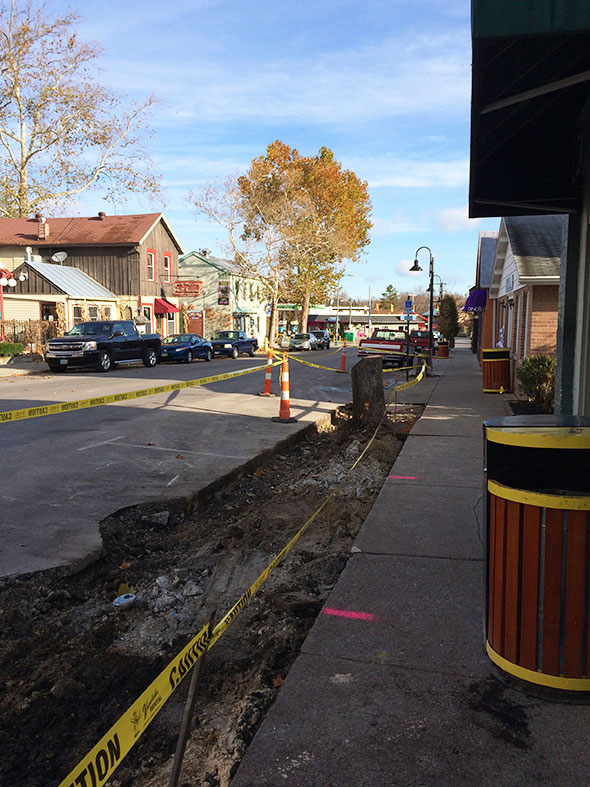 I returned later that evening with my four year old son. Spontaneously, we walked down from the library with friends to Current Cuisine to have dinner. As we walked north, we encountered a collection of bobcats and excavators lined along the east side of the street. At the Town Drug Store, we witnessed a vehicle cutting into the road a few feet away from the sidewalk and creating a trail of gray slip in its path. At Current, my son positioned our party at the table by the front window so he could keep an eye on the roadwork underway. We had a dinner of roasted turkey and mixed greens as the agile bobcats zipped past by our table. After our meal, we walked south along sizable sections of sidewalk broken into chunks of concrete, each the size and shape of a twelve pound game hen. 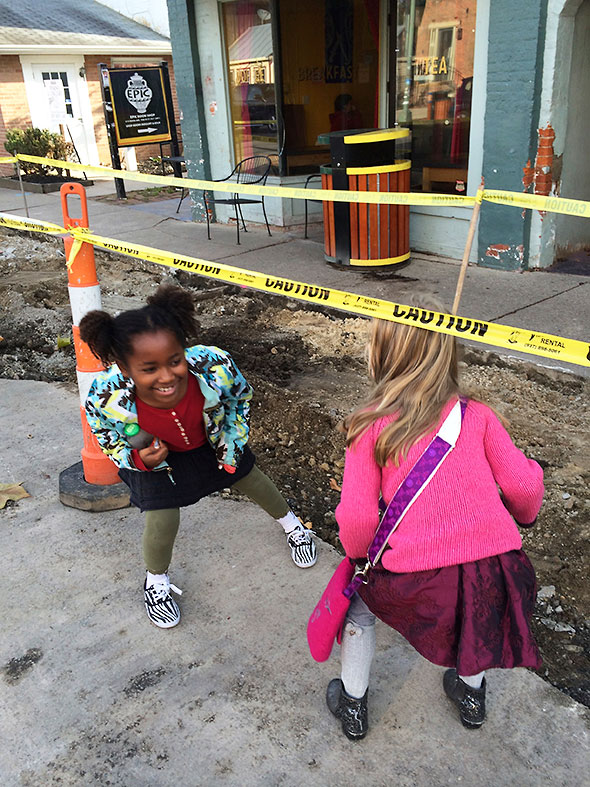 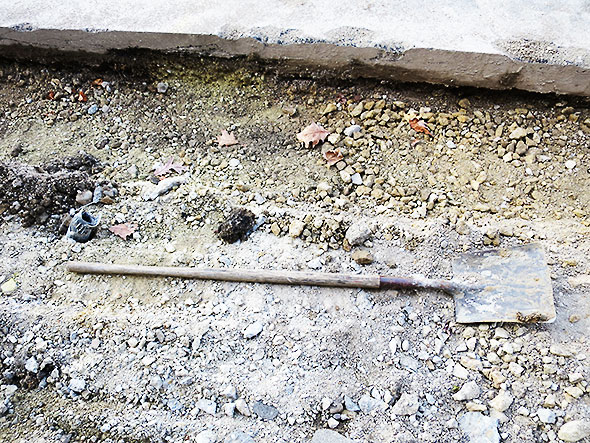 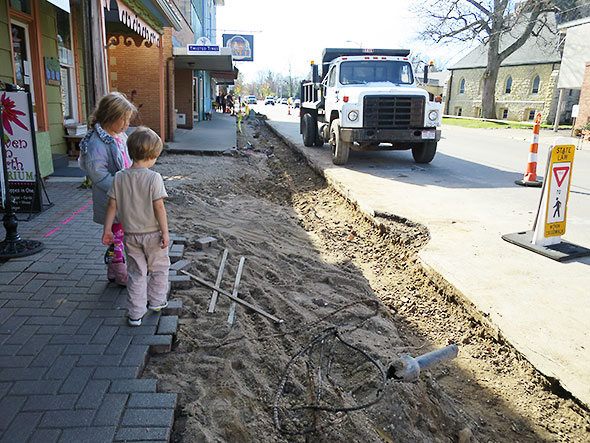 By the time the children and I returned on Friday, the sidewalks on the east side of Xenia Avenue were half their usual width. We slipped under the caution tapes and crossed over crushed gravel to the Emporium where we had a breakfast of bacon and eggs. Well provisioned, we returned outside and walked along the ditch formed along the remaining sidewalks. It looked like an archelogical dig. Dust covered shovels pointed north to south along the depressed trench. The pear trees—base and all—were gone. 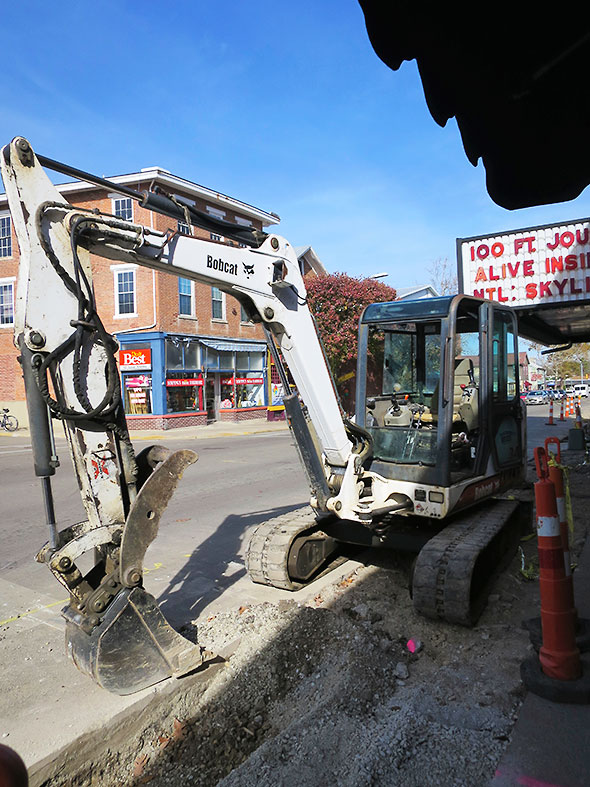 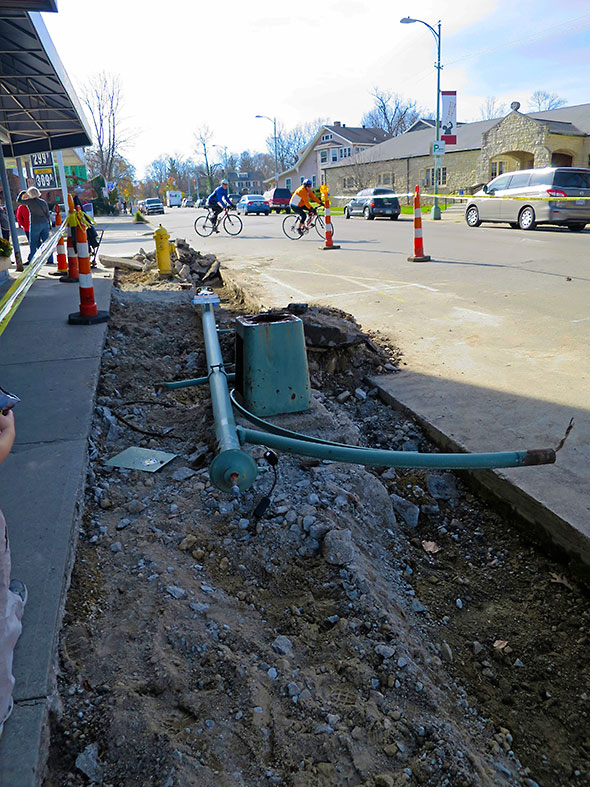 The chaos of dismantling the streetscape had reached a cathartic peak. The main work remaining that Friday was taking down the street lights. A magnificent scar stretched from the town drugstore to the senior center. Saturday and Sunday, we continued to visit downtown and work our way over the rubble, but in the dust I found myself unsettled. Taking out my cell phone, I sought out the village’s published renovation plans in an attempt to trace the order out from among the disruption.

Order returned on Monday when, in the early morning, a miraculous machine worked like a giant playdough press forming the long blocks of curb with great efficiency. Over the week the ground about the curb was leveled to prepare for the pouring of sidewalk and a giant drill cut holes for the installation of new street lamps. 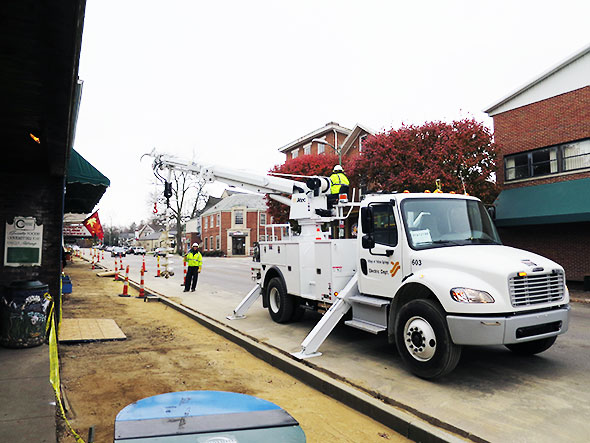 Word on the street is that the new sidewalks will be poured this coming Tuesday. Despite the uncertainty and the upheaval of the past two weeks, the complex effort and the exciting range of construction equipment visiting downtown has been highly entertaining. The west side of Xenia Avenue maintains a high level of accessibility, and the benches outside of Tom’s will undoubtably offer a front row view of the coming week’s activity. My family and I will continue to scale the east side obstacle course for a close and intimate encounter with the interesting, historical transformation well underway. This is our beloved hometown, after all, and it is our rich reward to witness firsthand the emerging streetscape.