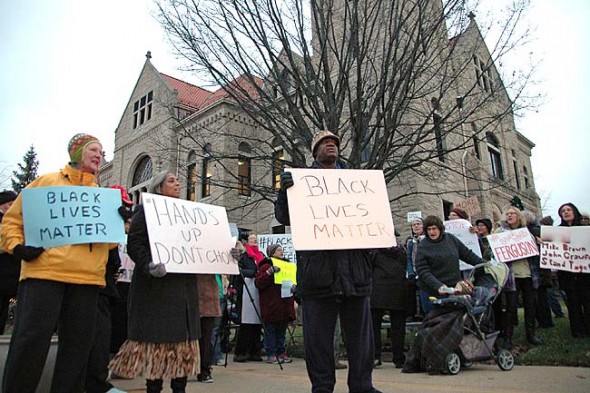 Villagers, from left, Joan Chappelle, Cheryl Smith and Bomani Moyenda, and nearly 100 others attended a demonstration at the Greene County courthouse in Xenia on Monday evening to highlight the injustice of John Crawford’s death by police shooting at the Beavercreek Walmart in August. (Photo by Lauren Heaton)

At 4:30 p.m. on Monday afternoon, just as most workers were heading home for the day, a group of about 100 people, mostly from Yellow Springs, were just arriving for an evening protest at the Xenia courthouse. Holding signs such as “Black lives matter,” “Justice for John Crawford” and “Hands up, don’t choke,” villagers stood in solidarity with similar demonstrators around the nation who are protesting the abuses they say the justice system is perpetrating against black communities in many places from Ferguson, Mo., to Staten Island, N.Y. to Beavercreek, Ohio.

The Yellow Springs contingent was organized by the Yellow Springs Area Justice for John Crawford Group, including villagers Bomani Moyenda and Judith Hempfling, as well as Antioch College students Greta Treistman, Myrcka del Rio and many members of the World House Choir. The group named itself after the black man who was shot by police in the Beavercreek Walmart on Aug. 9, an incident that, perhaps due to its non-urban location, has received less media coverage than the police-associated deaths of black residents Eric Garner in Staten Island, N.Y. on July 17, 18-year-old Michael Brown in Ferguson, Mo. on Aug. 9 and Tamir Rice, 12, in Cleveland on Nov. 22. But Crawford’s case was the first whose grand jury declined to indict police for the killing, which was captured on store surveillance video and appeared to condemn the offending officer, Moyenda said. For those reasons, he feels it deserves national attention.

“We’re trying to generate more attention to bring John Crawford’s name more into the national conversation … and to support the other efforts as well,” he said.

Antioch student Greta Treistman also sees these incidents in the context of the larger issue of race in America. She got involved because she feels awareness about discrimination is peaking around the country, and she wants to do everything she can to get to the critical mass that’s needed for change.

“People with privilege think that we live in a post-racial society, that racism is something their parents had to worry about but it’s not our generation’s problem,” she wrote in an email this week. “The protest movements happening around the country right now are working to change that national mindset. I want to do what I can in this conservative county (in a politically and historically important state) to change the perceptions of people in power about the importance and urgency of addressing the fact that we as a nation don’t value black life.”

Members of both the Yellow Springs and Antioch College groups have attended other demonstrations around the region, including a march from the Beavercreek Walmart to the police station and sit-ins at the Beavercreek police station in October and November. Many of those events have been organized by the Ohio Student Association, whose representative University of Cincinnati student Amaha Sellassie came to Xenia on Monday. He too aims to harness the energy that’s mounting nationally to protect the rights of not just black people, but those who are disempowered by the current dominant political, economical and social structures.

“We really see ourselves across the nation as performing the roles and function that SNCC did in the 60s,” Sallassie said of the Student Nonviolent Coordinating Committee during the Civil Rights era. “We want to harness this energy now to recognize the larger issues that create and sustain inequality and … be the thermostat — not the thermometer, but the thermostat — to create communities that value the lives of everybody.”

Local resident Migiwa Orimo, the artist behind many of the large screen print signs and banners, has also felt moved to participate in many of the regional demonstrations. She had no idea that on the August day she was doing errands around Beavercreek, police were shooting an innocent man inside one of the box stores. But as soon as she heard the news that evening, she knew what she was seeing was not an isolated incident, but a symptom of the local and global violence (including a fatal police shooting in Yellow Springs last year) that she believes has been growing out of control in the U.S.

“I had such a strong feeling that this is a pattern we are seeing — it was so clear,” she said. “It’s also this whole culture of relying on extreme force to protect ourselves, and in the end, we are not protected.”

The purpose is to bring together many different voices and address the racial tensions in our country and communities.