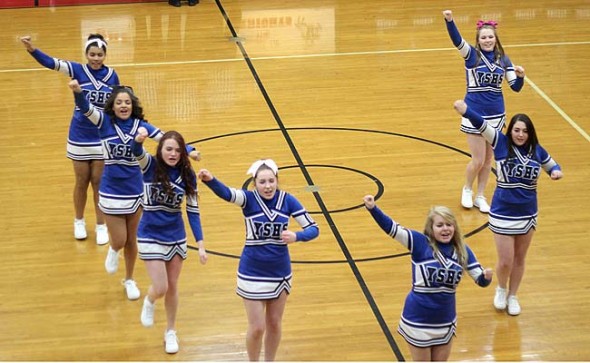 BASKETBALL
Best start for boys since 2010
The Yellow Springs High School boys varsity team improved to 8–2 on the season with a rugged 61–50 win over conference rival Dayton Christian on Saturday night. The 8–2 record is the best 10 game start for any Yellow Springs squad since 2010.

The Bulldogs, who were coming off a two week layoff due to a scheduling break and a cancellation, overcame shaky defensive efforts in the first and third quarters to have the lead at half, and then outscore Dayton Christian 23–8 in the final period to secure the victory.

It was another balanced scoring night for YSHS, led by Isaiah Taylor with 14 points. Other players making the scorebooks were Jared Scarfpin, with 12, Cam Miles and Kaner Butler, with 10, Devon Perry, 7, Liam Weigand, 5, and Ethan Dewine, 2. The Bulldogs finally return home for a home stand this week after playing eight of the first 10 games on the road.

Girls team drops one to DC
The YSHS girls varsity basketball team clawed its way back from a 28–14 deficit at halftime to make its match against Dayton Christian on Jan. 8 competitive in the final minutes. But they fell 45–32 to their conference rival to move to 4–7 (1–4) on the season.

Uncharacteristically poor foul shooting (9–17 from the stripe) and a slow start made the difference in the game. Even though the Lady Bulldogs controlled the boards (24–3 in rebounds, leading to 10 second-chance points), and outscored Dayton Chrsitian 12–6 in the last quarter, they couldn’t overcome the deficit.

Comeback win for 8th-graders
The McKinney eighth-grade boys basketball team had a comeback win over the Dayton Christian Warriors at home on Jan. 8. With great ball movement and defense the young Bulldogs played a fantastic first half. Dayton Christian had trouble solving the tenacious 2–3 defense and the Bulldogs led at the half 18–15, with Andrew Clark leading the way with 10 points in the half and awesome passes. Also playing great defense and passing very well was Tyreese Benning.

The third quarter was dominated by Dayton Christian. Good rebounding and play by Elliot Wiggins and Teymour Fultz kept the game within reach. The Warriors took a five-point lead at the start of the fourth, but the Bulldogs showed great fortitude as they hit 3–4 free throws, a beautiful 12-foot jump shot by Benning, and two huge three-pointers by Clark, which took the Bulldogs back into the lead with seconds left in the game.

SWIMMING
Swimmers clinch best times
On Saturday, Jan. 10, the YSHS swim team competed in the Oakwood Quad Meet, held at the Dayton Raider Aquatic Center. The Bulldogs had nine swimmers competing against the large swim teams of Dayton Oakwood, Kettering Alter and Springboro. The meet was divided into varsity and junior varsity events.

Maddie Keller, Brintlinger-Conn, Jorie Sieck, Alice Miller, Elle Piefer and Hannah Morrison all swam personal best times in the 50- and 100-yard freestyle. Charlotte Walkey and Emma Romohr also had strong swims at the meet.
“We may have been outvnumbered in the pool, but the Bulldogs are gaining confidence in the water,” Coach Jody Chick said. “This is an enjoyable and a great group of swimmers. There were many best times at this meet, which is our goal at this point in the season.”