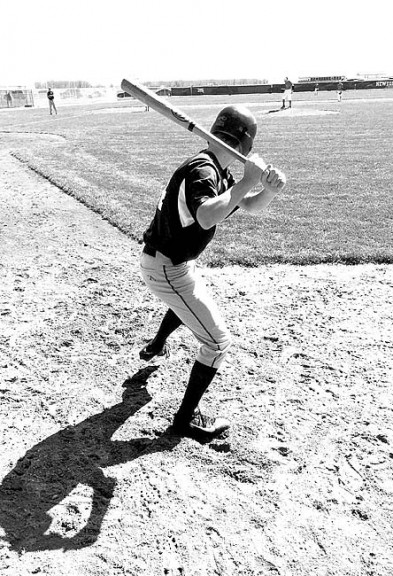 Zach Brintlinger-Conn studied the competition during the team’s loss against Newton on Saturday, April 11 (submitted photo)

The team is now 1–1 going into three home matches this week on the Antioch College courts.

The first conference game took place Monday at the home of Emmanuel Christian Academy. Yellow Springs, for the third time in as many games, gained the early advantage. Lead-off batter Jared Scarfpin walked and stole second. Donnie Isenbarger laid down a bunt single to move the runner to third, and subsequently stole second. Liam Weigand plated two with a single and scored himself on a throwing error. Jonathan Clark pitched nearly three scoreless innings with four strike outs and two walks to maintain the Bulldogs’ three-run lead. But a thunderstorm ended the contest and the game was scheduled to be resumed the following day.

Girls drop doubleheader
The Yellow Springs softball team traveled to Greenon and were swept by the Greenon Knights in a doubleheader played at Greenon High School. Senior Jesi Worsham started both games for the Bulldogs at pitcher and Chelsea Horton pitched in relief both games.

YSHS teams finish fourth, fifth
At the Old KTC track invitational at Waynesville last Friday, the girls squad, with a roster of 20, placed fourth out of nine teams. Competing against all Division I and II schools (YSHS is Division III), the girls team nonetheless hoped for a higher finish after taking second at last year’s Metro Buckeye Conference championships.

The boys squad, 15 strong after having finished runner-up at the MBC championships last spring, came in fifth out of nine teams at the Old KTC Invitational meet.

McKinney opens with a bang
Last Thursday, the McKinney track team opened its season hosting the annual McKinney Track Meet in front of a large, supportive home crowd. Unfortunately the weather did not hold and the meet had to be stopped after the 400-meter sprints. At that time, both the girls and the boys team were placed second behind Division I Wayne.

The boys 4×100-meter team (Campell, Crocker, Siler, Potter) ran with a time of 56.63, a new school record. The old record of 58.79 had been established last year (Crocker, Shell, Siler, Looper).
“It will be interesting to see how this very talented team is doing throughout the season when the exchanges are getting better,” Coach Peter Dierauer said of the relay.