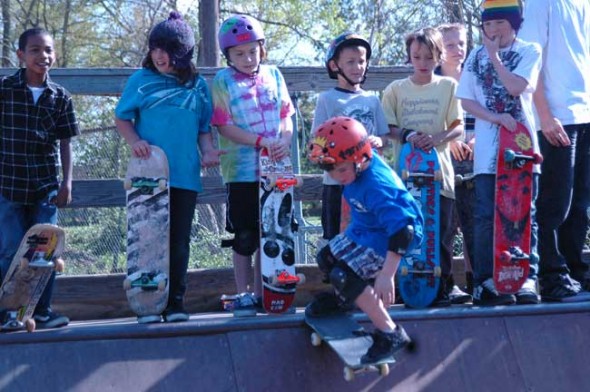 The YS Skate Park will complete its first phase of renovations on May 30, to be unveiled at Skate Fest on June 13, during Street Fair. (photo by Lauren Heaton)

First phase of Skate Park renovations to be unveiled

On Saturday, June 13, noon–5 p.m., during Street Fair, the Village of Yellow Springs will unveil its first phase of upgrades to the Skate Park, which is located at John Bryan Community Center. The Village has invested over $40,000 to complete the upgrades of this phase, which include replacing the current, wooden structures with several poured concrete obstacles. Proponents and users of the park collaborated with the Village via the Public Arts Commission last year to begin raising money to overhaul the existing structures.

As part of the first phase unveiling, Skate Fest, a family-friendly skating event, will be held during Street Fair, and plans to feature booths from skating organizations and food and merchandise vendors, as well as skating demonstrations and contests, sponsored by locally-owned and operated Centennial Skateboards, Redrum Skate Co. and Ghost Town Wheels, local bands, live art and more. Event organizers are putting out the call to interested sponsors and vendors for the event; booth fees are a donation of 10 percent of the day’s proceeds. The event also seeks prize donations for a raffle to be held during the event.

The deadline for sponsor and vendor confirmations is May 15; Phase One upgrades will be completed by May 30. Set-up for the day of the event will be from 9–11 a.m.

Proceeds from Skate Fest will help the skating community move the Skate Park into its second phase of renovation. The fundraising efforts are being facilitated by the Public Art Commission subcommittee, led by AJ Warren,  Matt Housh and Brian Housh. The subcommittee will continue to partner with community members to organize fundraising activities and to pursue various grants to raise approximately $90,000 to complete Phase Two, which includes a bowl, stairs, a handrail, a flat bank and a euro gap. The subcommittee plans to secure these funds within one year.

To get involved with Skate Fest, or to make special set-up arrangements, contact AJ Warren at aj_warren@live.com or 937-823-3730.