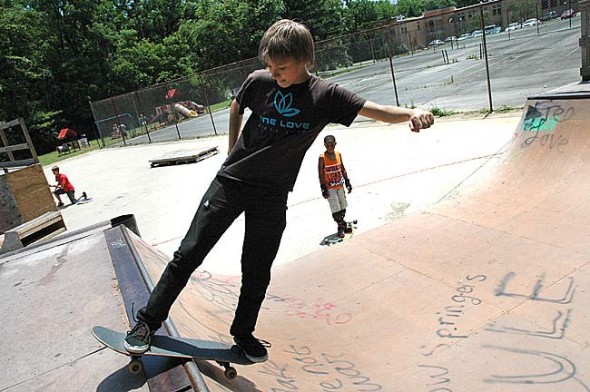 Charles Keller demonstrated some moves on the mini ramp on Sunday, during the clean-up day at the Village skate park. Organizers from the Village Public Arts Commission have recently partnered with skate park users to commit both community funds and Village government earmarks to fully renovate the skate park. (Photo by Lauren Heaton)

A cruise around the village skate park is what local youth Charles Keller and Justin Nash might call their daily constitutional. Keller, a STEM School student, is usually there by 4:30 p.m. — earlier in the summer — using the mini ramp to practice rock to fakey and tail stalls, while Nash, who attends Mills Lawn, comes out to master the basics of dropping in and pumping on the half pipe.

“I’m loyal to the skate park,” Keller said. “I come here every day to hang out and skate with my friends.”

While they love their local skate park, the two boys have noticed the sunken platforms at the top of the ramps and the gaps in the wooden decking of the pyramid. Piles of dust have washed down from the bike path embankment, and pebbles that cause nasty crashes are a hazard everywhere, they said. The disrepair has at times caused their trucks to snag and their bodies to fall and get hurt.

Since they as the users are best informed about the problems, Keller, Nash and the estimated 100 other people reputed to use the park each year are excited to be part of the solution. Using the public input venue of the recently organized Public Arts Commission, the users and supporters of the skatepark have partnered with Village government to draft a skate park renovation plan. The partnership involves both dialogue and work on the part of both the users and the property owners. Local resident A.J. Warren, a professional skateboarder and parent of two avid skateboarders, finds the partnership very satisfying.

“That’s the great thing about Yellow Springs — when they see something that is pretty dynamic, they are willing to lend a helping hand.”

Village Council member Brian Housh, a representative to the Public Arts Commission, has also been pleased with the collaborative public process.

“The bottom line is Village Council and Village staff are really listening, and everybody is encouraging this kind of collaboration.”

The skate park renovation will happen in phases. Armed with $3,000 from a prior Skate Music Fest fundraiser, about a dozen volunteers came out this past weekend to sweep up the dust, paint over the graffiti, and rebuild parts of the wooden ramps. It’s the public start to a fundraising campaign to possibly match the $35,000 the Village has budgeted for skate park renovations this year. The public group of users hopes to eventually have enough money to replace the wooden ramps, which have character and aesthetic, with concrete, which is more functional and lasts longer, according to Warren, who is a mechanical engineer. The group is also working with Antioch University Midwest student Katheryn Amend, who is helping to fundraise for course credit.

Though the renovation effort will be gradual, Housh believes the process is the ideal way for public groups to work with local government to maximize resources and achieve an outcome that satisfies the most people. And as fellow Council member Lori Askeland has repeated at several public meetings, the Arts Commission may by natural course be evolving into the “arts and parks commission.”

“It makes sense to me to look at public spaces in general this way — I think that’s cool — to bring together Council via the commission, citizens and Village staff,” Housh said, referring to Village Interim Manager Kent Bristol and Village Streets Superintendent Jason Hamby, who have both attended the arts commission meetings to give budgetary and other practical input.

Indeed, the renovation endeavor has gone beyond the skate park to include talk about the Bryan tennis courts, toddler park and the teen center located inside the building. Discussions have led to volunteer efforts to improve the teen center, a small budget for new play equipment, and talk about reverting one side of the tennis courts to a law enforcement “Safety Town” training area and the other to a skate park area for younger children. The conversations have even extended to the effort citizens and the Village have worked on to build a bridge over the Ellis Pond spillway, where a local resident was seriously injured last year.

“One function [the arts commission] definitely has is to be a place where people can bring some of these issues — like the skate park, where we recognize that we’re not the skate park experts and we need to get input from people like A.J., the kids, parents, and the community to make it a better park,” Housh said. “And I love the idea of these things becoming matching [fundraising] efforts so that we can do much cooler things.”

As for the skate park, the youth have said that they like the local skate park for its character and for the safe community of users who come there. And they would like the equipment to be a little safer — and if possible, a few more gaps, a set of skateable stairs and a bowl to skate would also be great, Keller and Nash said.

Warren, who last year won the Mountain Dew Bowl Series, took second at the Bluegrass Games and is sponsored by Red Rum Skate Company, uses the local park to practice for tournaments. Though he skateboards at a higher level, he counts himself a user like any other.

“We want to collaborate with skateboarding youth in Yellow Springs and want them to be able to say, ‘this is our skate park,’” Warren said.