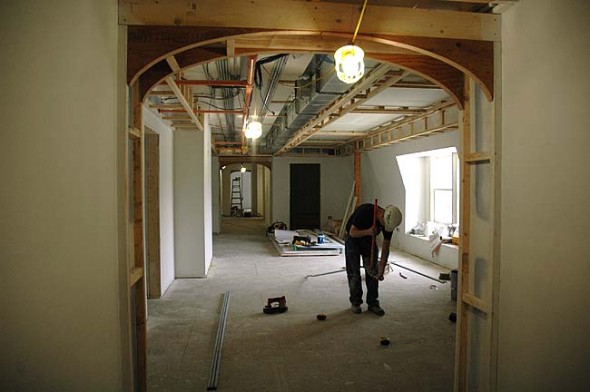 Due to construction delays, the Mills Park Hotel will open in late 2015 instead of the summer as initially planned. The 24,000-square-foot, 28-room hotel is inspired by late 19th-century Southern colonial architecture and the former Mills House that stood across the street. Pictured is a view of the third story interior, which features 12 rooms and a communal sitting area. (Photo by Megan Bachman)

The new downtown hotel modeled after a 19th century village home won’t open until later in the year, its owner said this week.

The Mills Park Hotel, originally slated to be open in June, will likely not open until October or November due to unforeseen delays with contractors, according to owner Jim Hammond.

While he said he was frustrated at the slow progress towards opening, Hammond added that the attention to detail will be worth the wait.

“It’s going to be nice, and we don’t want to cheapen it,” Hammond said.

When the Mills Park Hotel does open, it will feature a grand staircase and chandelier in its lobby, a three-tier fountain on an acre lawn, a Southern-style restaurant serving shrimp and grits, a bakery churning out fresh breads daily, a general store gift shop, 28 guest rooms with handcrafted woodwork and vintage-style furnishings and an elegant banquet hall for weddings and meetings.

At present, much of the interior detail has yet to be started as the roof, siding, plumbing, electrical and fire suppression systems are completed. Arriving soon is the Amish-made furniture from Holmes County, including four-poster beds and mattresses for the guest rooms. Hammond is about to start constructing an elaborate front desk.

The hotel, located at the corner of East Limestone Street and Xenia Avenue, pays homage in name and design to the home of local settler William Mills that stood across the street, while it will also incorporate Southern colonial architecture from the late 1800s, Hammond said.

Hammond said he was hoping to open the hotel in the busy summer months, and already had taken tentative reservations  for hotel rooms, the meeting room and the banquet hall. Demand for the hotel has already been high and he was booked several months out before cancelling, he said.

“It hurts,” Hammond said of the delay. “I have a substantial investment that is not making any money.”

Hammond also had to put on hold plans to hire about 16 employees to work at the hotel and restaurant. While Hammond said he prefers not to have so much construction downtown, the imminent landscaping slated for the site and installation of a permeable parking lot will soon improve its appearance, he said.

Ground broke on the Mills Park Hotel in spring 2014 after local residents Jim and Libby Hammond purchased the 1.6 acres known as the Barr property in 2012 for $379,000. Jim Hammond previously restored the Grinnell Mill in a partnership with Miami Township Trustees. In recent years, Friends Care Community and Home, Inc. had explored creating senior and affordable apartments on the Barr property.

The three-story, 24,000-square foot hotel was designed by local architect Ted Donnell. Many local builders and contractors are working on the hotel, including Tommaso Gregor of Gregor Construction, who is completing some of the more intricate woodwork, Hammond said. While the hotel is being built, Hammond is working on the  finer details, including ways to reclaim and reuse old wood and bedrock from the property. Recently, Hammond built a custom ice chest from an oak tree cut down on the property, crafted a mini-bar for one room to look like an old seller’s kitchen cabinet, and is set to use the limestone rock dug up to install the foundation in several places on the site. He also commissioned a painting of the original Mills House to hang in the front lobby and contracted with Todd Van Lehn to use reclaimed ash from the property to make the restaurant’s tabletops.

Hammond’s daughter, Katie, is currently working on the menu for the restaurant and bakery that she will run once the hotel opens. With degrees in culinary arts and hospitality, Katie is looking forward to opening the approximately 40- to 50-seat Ellie’s restaurant, which is named after her red and white Corgi. The restaurant will focus on breakfast and lunch and feature Southern-style cuisine such as eggs Benedict with fried green tomatoes and a crab cake. Breakfast will highlight cinnamon rolls, coffee cake and a savory roll consisting of an everything bagel baked with onions and Gruyère cheese and served with chive cream cheese. Hammond also hopes to bake her favorite onion dill bread she remembers eating in her youth at the former local restaurant Carole’s Kitchen.

Katie Hammond is also consulting on the furnishings, wall color and artwork to hang in the hotel. The hotel design was inspired by two of her favorite inns, the Boone Tavern in Berea, Kentucky and a historic inn in Charlotte, N.C., she said.

“We’re going for bright colors, a lot of wood and a real, old, classy boutique feel,” she said.

While the hotel approximately doubles the amount of overnight guest rooms available in Yellow Springs, Katie Hammond said it is still small compared to many hotels, which will enable a more personal approach.

“It’s going to be more personable — we’ll get to know the guests who are staying,” Hammond said.

11 Responses to “Mills Park Hotel delayed until the fall”