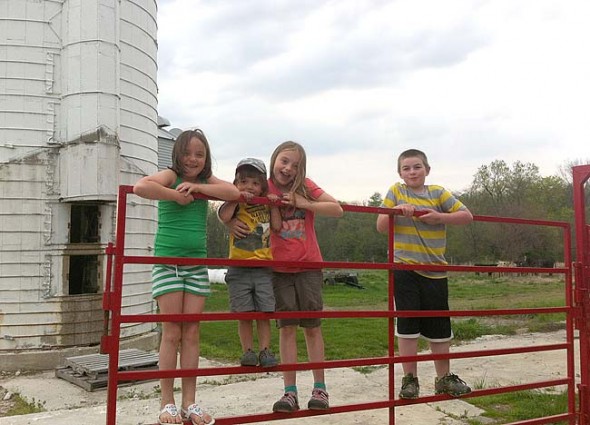 Local kids, from left Rebecca, William and Josie DeWine and Dane Beal hung out with the cows of Whitehall Farm, a 940-acre property just north of the village that was saved from development in 1999. The Tecumseh Land Trust, which played a major role in preserving the land, will host a Family Fun Day at Whitehall on Sunday, May 10, with games, food, historical tours and horse-drawn carriage rides. (Submitted photo by Ara Beal)

It was host to an early meeting in the founding of the Republican Party, became famous for breeding a shorthorn bull and was the focus of a community-wide effort to save land from development.

After more than two centuries, the historic Whitehall Farm has many stories to tell. But it’s the story about how a small town raised more than one million dollars in six weeks to purchase and preserve the farm in 1999 that continues to inspire both villagers and a local land trust whose early work was defined by it.

This summer, the Tecumseh Land Trust is sharing that history with the next generation, starting with a Fun Day on the Farm on Mother’s Day and ending with a musical re-telling of the Whitehall Farm auction by Yellow Springs Kids Playhouse in July.

Fun Day on the Farm is from 3 to 6 p.m., Sunday, May 10, at Whitehall Farm, 4627 U.S. 68 just north of Yellow Springs. The event features family-friendly games, crafts, tours of Whitehall Farm, horse-drawn wagon rides, face painting, fair-style food and a plant seedling sale. Tickets are $5 per person and $10 per family, with proceeds going to support the land trust and YSKP.

Auditions for original YSKP musical “The Farm,” inspired by the Whitehall Farm story as well as George Orwell’s “Animal Farm,” are May 9 and May 16 from 12 to 3 p.m. at the First Presbyterian Church. All children six and up are welcome to audition. The show will be staged July 16–26 by the local youth theater company.

Reflecting on the Whitehall farm auction this week, TLT Executive Director Krista Magaw said the preservation effort put the land trust, formed in 1990, “on the map.” The non-profit has gone on to preserve 24,000 acres of farmland and natural land in three counties.

“It said ‘this land trust and this community are serious about protecting land,’” Magaw said. “I hope it had a lasting impact in terms of people seeing that the little guy can do something.”

Ara Beal, director of Yellow Springs Kids Playhouse, added that the David and Goliath theme of the Whitehall story, in which an acreage of land nearly the size of Yellow Springs itself was saved from potential residential and commerical development, will be revisited in the summer show.

“It’s an important theme to talk about with youth because youth think they are often too small to do anything, and the story of Whitehall shows that size doesn’t matter,” Beal said.

According to the land trust’s “The Whitehall Farm Story: A Grassroots Effort to Save a Community,” when the farm was slated to be sold as 37 different parcels at auction in 1999, the Tecumseh Land Trust  and other groups organized quickly to try to purchase and preserve the farm after years of groundwork. In less than two months, they raised $1.2 million from the community, including $387,000 from the Village of Yellow Springs, and from community donations via flea markets, garage sales, benefit concerts, bumper sticker sales and more. Dave and Sharon Neuhardt, who already owned the Whitehall mansion and thirty surrounding acres, ultimately bid $3,275,000 for the entire parcel and the community money was used for a conservation easement on the property. At the “Fun Day on the Farm, Dave Neuhardt will be running the historical tours.

Beal said the Whitehall event is “a story of active place-making” in which Yellow Springs fought against the potential for development that went against the town’s values. In YSKP’s “The Farm,” a group of wild animals, farm animals and human kids work together to save their farm from developers after its owner passes away, according to Beal. In a steampunk-styled production that will use puppets, animal characters and full-size tractors made out of recycled materials, “The Farm” will explore how a family and community decide the future of a beloved farm. Beal sees that the story is critical for local youth to understand.

“The kids in our show don’t remember [the Whitehall Farm] story, if they were even alive at the time, so this a great way to connect with their history and with oral history,” Beal said.

YSKP received a $10,000 grant from the National Endowment for the Arts to produce “The Farm,” the company’s 21st original musical. The original play was written recently by Joan Sand, a Minnesota librarian who founded the theater company that YSKP was based upon, Beal said.

Magaw, who is already working with local youth as part of the Tecumseh Land Trust’s Kids Conservation Club, is also interested in sharing the experience with children, which was the seed for the Fun Day on the Farm.

“We want to get the next group of conservationists raised up and give kids the chance to experience farms and learn the history,” Magaw said.

According to “The Whitehall Farm Story,” Whitehall Farm was originally purchased in 1808 by Cincinnati industrialist Martin Baum, who established the popular Yellow Springs Inn. In the mid-1800s, Aaron Harlan, who became a U.S. Congressman, built a 12-room brick house that is still part of the Whitehall mansion and held a meeting there to discuss the founding of a new party, the Republican Party. Springfield tire company founder Edwin Kelly purchased the property at the turn of the 19th century, painted the mansion white dubbing it “Whitehall,” and brought the farm fame by raising cattle such as the Whitehall Sultan, considered the most famous shorthorn bull in history. When Kelly’s daughter, Martha Rankin, died in 1994, her seven grandchildren decided to put it up for auction.