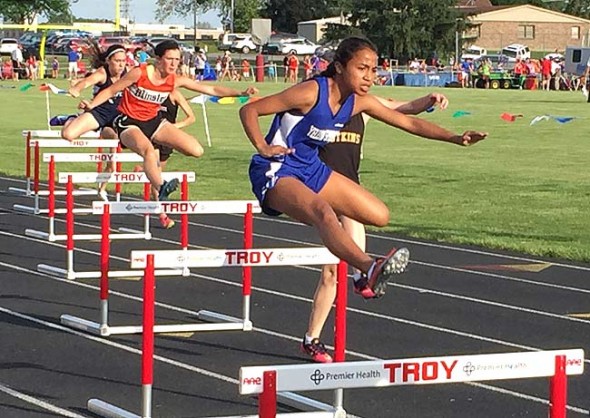 Sophomore track athlete Julie Roberts ran the 300-meter hurdles to a seventh-place finish in the regional finals last weekend. She ran the race in in 48.75 seconds. (Submitted photo by Coach Peter Dierauer)

In the 110-meter hurdles Butler finished in sixth in 15.97 seconds, just half a second and two places shy of qualifying for state. He scored three points in the effort. Butler also made it to the finals in the 300-meter hurdles, finishing in seventh in 41.56 seconds for two more points.

Julie Roberts ran the 300-meter hurdles to a seventh-place finish in the event finals in 48.75 seconds. Though the top four made it to states, Roberts scored two points for her team in the race.

Butler and Roberts were the only Bulldogs who scored for their teams, singlehandedly giving the boys a 37th- and the girls a 31st-place finish.

In other events, the boys 4×200-meter relay team (Cameron Miles, Bryce White, Joe Plumer and Ed Johnson) finished in 1:34.89 in the preliminaries, not quick enough to make the event’s finals.

Meanwhile, the boys 4×100-meter relay squad of Aaron Sherwood, White, Miles and Johnson came in 45.44 seconds in the preliminaries, barely missing a chance to run in the event’s finals.