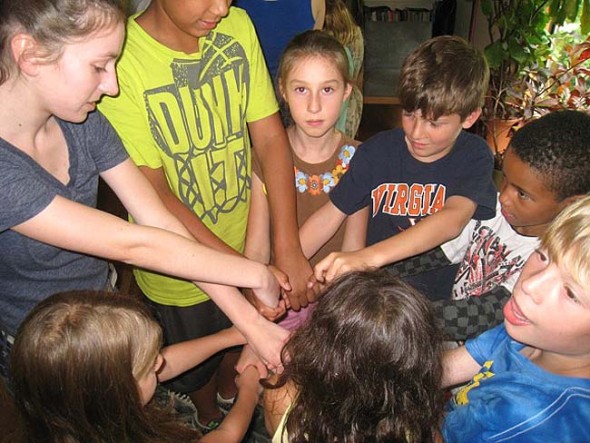 Ursula Kremer, left, a Youth Helper at this summer’s Bahá’í day camp, leads a group of campers in a game called “The Knot,” in which children must untangle themselves without breaking hands. The game enacts the virtues of happiness and unity. (Submitted photo)

A small sign on Linden Qualls’ bright red door sets the tone for both her home and the children’s camp she’s run here for nearly 30 years. “If there is right in the soul, there will be beauty in the person,” the quote, by Chinese philosopher Lao Tzu, begins, building in just four short verses from person to home to nation to “peace in the world.”

That’s the big picture of the Virtues Day Camp, centered on the principles, or virtues, that animate the Bahá’í faith Qualls and her husband, Roi, have practiced for many years. “Bahá’ís believe that the education of the individual soul has a profound effect on everyone around that soul,” said Qualls. “We believe that you can change the world through education of the human heart.”

The more intimate picture is revealed in the dozens of thoughtfully designed teachings, games and crafts that aim to “bring out the virtues of children, which is so critical to the health of the planet,” said Qualls, a longtime Bahá’í educator whose lesson plans are used all over the world. She organized her first Virtues Day Camp in Kettering in the early 1980s, and has continued running it at the Yellow Springs home she and her husband built in 1988.

“Linden is amazing,” said Kim Kremer, mother of two former campers, Ursula and Greta, who have since “graduated” to become Youth Helpers. “She brings the exact same amount of enthusiasm to her education of children that she had 30 years ago.”

This year, said Qualls, the camp hit a milestone. “I had my first ‘grandstudents,’ the children of a student from my very first camp.”

As a focus of summertime learning, “virtue” may not seem to have ready-made appeal, especially to children. But Qualls’ experience has shown her that young people are “so hungry for meaning and purpose” in a culture that often hypes spurious substitutes, such as money, fame, and material goods.

Each year’s camp focuses on several virtues drawn from Bahá’í teachings. “Happiness” is one of five highlighted virtues this year. Jessica Halls, mother of two campers, Hannah, 9, and Xavier, 7, said her children came home “talking a lot about happiness and what does and doesn’t make people happy.” Halls added, “I was surprised by how much they took away from the camp.”

The other virtues being taught this summer are Cleanliness, Orderliness, Purity of Heart and Truthfulness. For Nina Brown, 7, “Truthfulness” made a deep impression. “Lying can really hurt your soul,” said Brown, who recently attended Qualls’ camp for the first time and spoke with quiet authority. “Truthfulness is the foundation of good,” she added.

“I understand that the teachings from a Persian living in the late 1800s make for a different kind of summer camp,” Qualls acknowledged with a laugh. The founder of the Bahá’í faith, Bahá’u’lláh, was exiled from his homeland for “unorthodox ideas,” said Qualls, including equality of the sexes and the importance of educating girls. Though such ideas have obvious contemporary resonance, other spiritual teachings, involving concepts like reverence, sacrifice, and detachment, are more complex and esoteric.

Making these accessible and tangible to children as young as 6 might seem daunting. But Qualls brings home the message with simple examples. “When we talk about ‘Purity of Heart,’ we talk about a scenario where you have to decide whether to invite the wealthier kid to your birthday party in order to get a great gift,” Qualls explained. “The kids intuitively get it.”

Metaphors, those age-old staples of wisdom literature, are also central to Qualls’ teaching of the virtues. One game exploring the question “How do you cleanse your heart?” involves “sacred raindrops” (made of holographic paper and beautiful to behold) hidden in the woods. Children find them and hold them against their hearts, enacting the idea that “the counsels of heaven” are like a cleansing rain.

Each day of the five-day camp begins with prayer, and “Quotes and Questions,” a lively fill-in-the-blank game drawn from Bahá’í teachings, is threaded through the day’s activities. Though the material is explicitly Bahá’í, most of the participating children and their parents are not followers of the faith.

“I’m not Bahá’í, so I was a little wary of it at first,” admitted Laura Pardo, mother of Luka Rao, who at 6-and-a-half was one of the youngest children in camp. But Pardo thought the camp would be a “good introduction to the spiritual side of life” for her son. And in fact, she said, “He brought back better habits, and some questions about religion.”

Qualls said she’s never had a child drop out of the camp, though the days are long, 9:30 to 5:30, and the activities, while fun, are demanding. “The camp is meant to be an immersive experience,” said Qualls. “That allows it to make a huge impression.”

The camp takes place in the Qualls’ home and yard, and an adjacent common space. Physical activities alternate with cerebral ones, serious with more playful ones. Camper Nina Brown freely admitted loving “Splash or Be Splashed,” the only game, she said, “where you get to get people back!”

Does teaching virtues in such a direct fashion work? Youth Helpers Ursula, 17, and Greta, 15, attended the camp as children and feel changed by the experience. “It’s shaped me quite a bit,” Ursula said. “I examine my own actions more, think about what I can improve on.” Greta noted that as a Youth Helper, she’s expected to model the virtues, “which can be challenging” over long days with young children. “But Linden really encourages people to care for each other, and I can appreciate that part of it even more now as a helper.”

There’s a small woods behind the Qualls’ home that’s a favorite spot for campers’ games and free play. Fittingly, it’s a common space shared by all the residents of the Littlewood neighborhood. (“Though I’m pretty sure I’m the heaviest user!” Qualls laughed.) Enter its fragrant hush on a hot August day, and it’s a bit like stepping into Glen Helen’s Pine Forest in miniature. Under those trees, it’s not hard to believe that “peace in the world” might begin right here, in the hearts of the children who come, and come back, to camp.

“In the Bahá’í faith, children are educated to be light-givers,” Qualls said. “The whole idea is that you grow your virtues, then go out into the world to serve humanity.”

Virtues Day Camp is held twice each summer. The cost is $25 for the week. The next camp, which runs from Aug. 10 to 14, is currently full. The parents of children ages 7–10 (exceptions may be made for slightly younger and older children) are encouraged to contact Linden Qualls at 767-7079 by May 2016, for spots in next year’s camp.

One Response to “Bahá’í camp immersed in virtues”